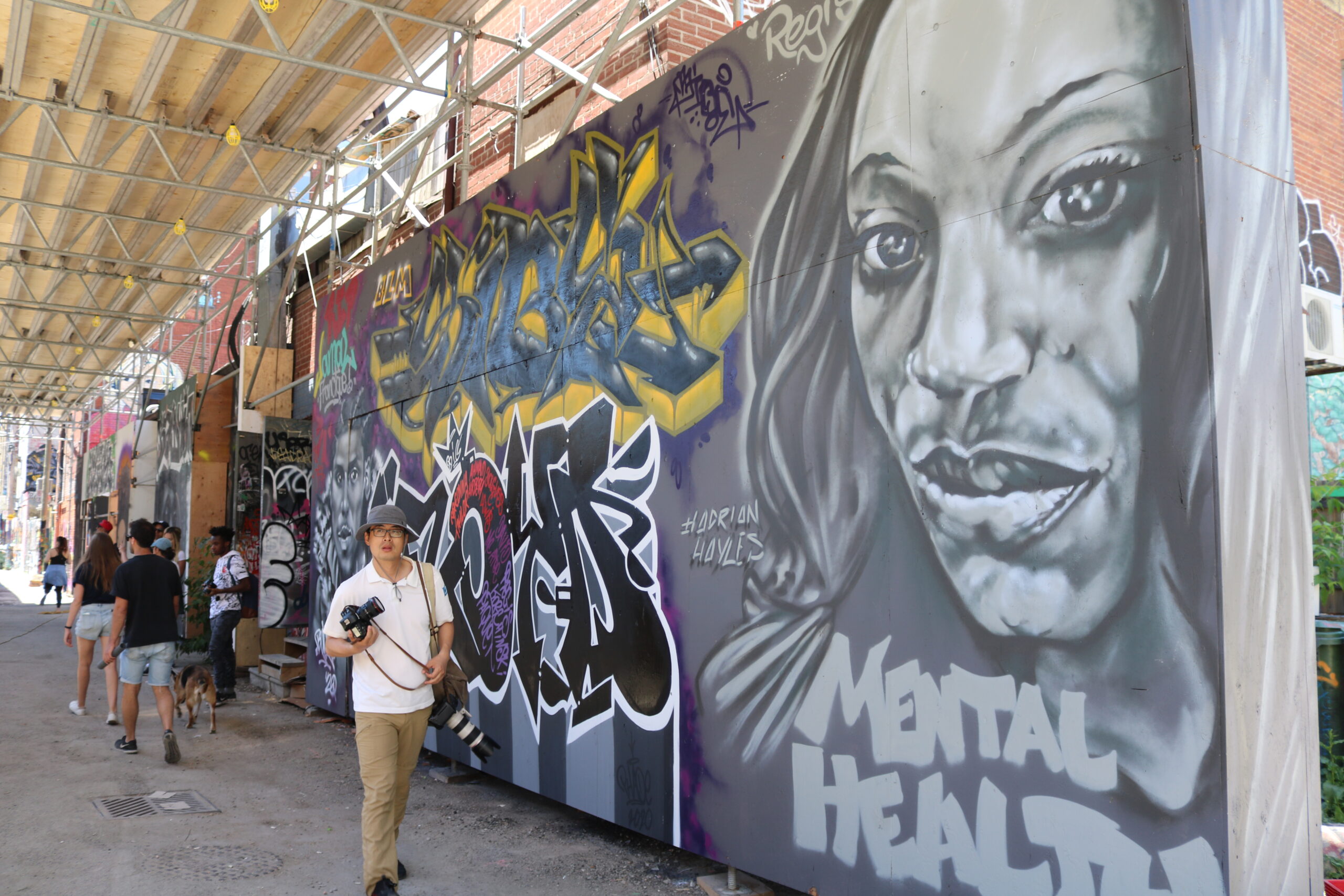 The Toronto-based artist, who works under the name Danilo Deluxo, crafts oil-on-wood canvases exploring Afrofuturism and has created graphics that raise awareness about the death of Trayvon Martin, a Black teenager who was shot and killed by a neighbourhood watch volunteer in Florida in 2012.

McCallum also leads art workshops for youth of colour around the city so they have the opportunity to see themselves reflected in different artforms.

He said he’s instilled these values from the “conscious” community of aunties and uncles he grew up with, many of whom were involved in social justice spaces that worked to champion marginalized voices.

So when a friend asked McCallum to join a “graffiti jam” in Toronto’s Graffiti Alley — one that would speak to injustices that have sparked a wave of anti-Black racism and police violence protests around the world in recent weeks — he jumped at the chance.

“As a Black person, as a person of colour … it’s been a really heavy time for us. And it’s important to protest and voice up,” McCallum said.

McCallum was one of some 40 graffiti artists from the GTA who met at Graffiti Alley, a laneway near Queen Street West and Augusta Avenue known for its colourful murals, on Saturday for what organizers called Paint the City Black.

These include messages like “I can’t breathe,” a phrase uttered by George Floyd before he was killed by Minneapolis police in May, and references to Breonna Taylor and Regis Korchinski-Paquet, two other Black people who died this year during interactions with police.

McCallum contributed an image of a Black power fist accented with an African fabric pattern, which he said recognizes the civil rights movement and “acknowledges our cultures and people of African descent.”

Jessey Pacho, a graffiti artist who goes by the name Phade and who helped organize the jam, said artists were asked to use black as the main colourway in their murals, which helped make a visual statement in Graffiti Alley.

“When you walk through the laneway, it’s interesting because, typically, you see bright, sort of vibrant colours,” he said.

“But then you get to this one section where you notice all of the artwork is black,” Pacho said. “And we wanted to do that to show our solidarity with the Black and Brown lives that have been oppressed, but also to kind of draw attention to the cause.”

For the event, he and a fellow artist, Kedre Browne, covered an existing Donald Trump portrait in Graffiti Alley with a mural of a black panther protecting a globe as a reference to the Black Panther Party.

“Graffiti itself is an art of protest,” Pacho said. “Oftentimes, graffiti is associated with gang culture or gangs and violence. But I think this really showed the potential of the Toronto graffiti community when we do come together.”

Moises Frank, a graffiti artist and Humber College graduate who also helped organize Paint the City Black, said art has the capacity to shed light on issues experienced by the oppressed.

He said he wanted to bring Toronto’s graffiti artist community together “on an issue that’s bigger than just writing our names.”

“I tried to make sure that everyone who painted was aware that it’s not about how big you go or how cool your letters look or how good your portraits come out. It’s about you coming in here and protesting in a peaceful way,” said Frank, who is also known as Luvs.

Both Pacho and Frank hope the murals will encourage people to reflect on their own privileges while acknowledging and calling out racism when they see it.

For McCallum, the art has the potential to inspire support and social change for the Black community.

He said he wants people to “recognize the continual trauma that Black people have to go through on a regular basis.”

“It’s important that … there is a power shift and that this art and this creative inspiration manifests with meaningful change,” McCallum said.