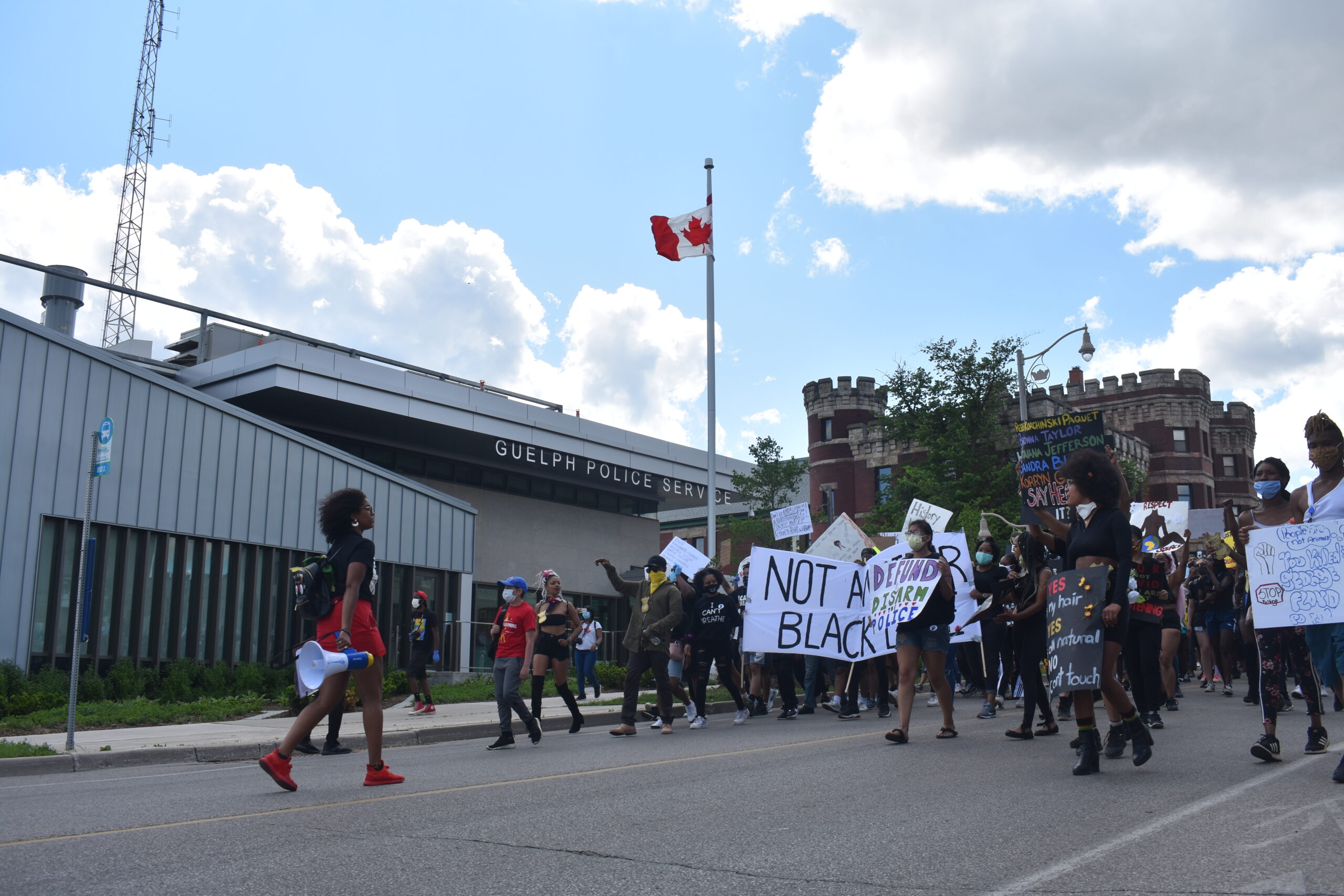 GUELPH — A few thousand demonstrators marched through the streets of Guelph on Saturday in support of the Black Lives Matter anti-racism movement, with speakers rallying protesters against police violence and calling for systemic change.

“Today we are here to stand for something we believe in. It is enough of the police brutality and the violence that our BIPOC community faces,” organizer Kayla “Kween” Gerber told a roaring, diverse crowd. BIPOC stands for Black, Indigenous and people of colour.

The demonstration took place in tandem with gatherings across the country, and around the world, continuing the momentum that started with the killing of George Floyd, an African-American, at the hands of a white police officer in Minneapolis on May 25.

Floyd died after officer Derek Chauvin pinned his neck with a knee for nearly nine minutes in a busy Minneapolis street. The death was caught on cell phone video and shared worldwide.

Demonstrators took to the streets of downtown Guelph, about 95 kilometres west of Toronto, in a show of strength and unity with protesters around the world.

They chanted, “No justice, no peace, no racist police,” and “hands up, don’t shoot.” Then they kneeled on Wyndham Street South outside Guelph Police headquarters as officers watched.

Unlike other cities including Toronto earlier this week, neither the police chief or officers knelt with protesters. Guelph’s politicians — all white — had earlier said they would respect the wishes of organizers and not attend the march.

However, activist Marva Wisdom, one of the guest speakers, still had a message for the city’s leaders.

Wisdom called the local MP, MPP and mayor by their names and thanked them for admitting systemic racism exists in the Royal City community and made clear what she expected from them.

“Here’s what I am asking for you to do now: and that is to open your doors to the conversations that will happen and we’re here to help you,” she said.

“It’s time to listen rather than be talked to,” Wisdom said.

Organizers called on the municipal government to move funding from the police to public health and initiatives that tackle vulnerable demographics. Most protesters stopped short of calling on the city to defund the police, as some in the U.S. have demanded.

Spoken word and musical artists took to a small stage in front of City Hall on Carden Street before the march started, encouraging protesters to remain resilient in the face of discrimination.

The local public health agency advised ahead of the protest for people to wear masks, which it seemed more than 95 per cent of attendees wore, but did not explicitly say residents should not attend.

Wellington-Dufferin-Guelph Public Health did recommend, however, those who attend to self-monitor for symptoms of COVID-19, the sometimes fatal disease caused by the coronavirus. Guelph has had a low margin of community spread and only had 30 current cases as of Friday.