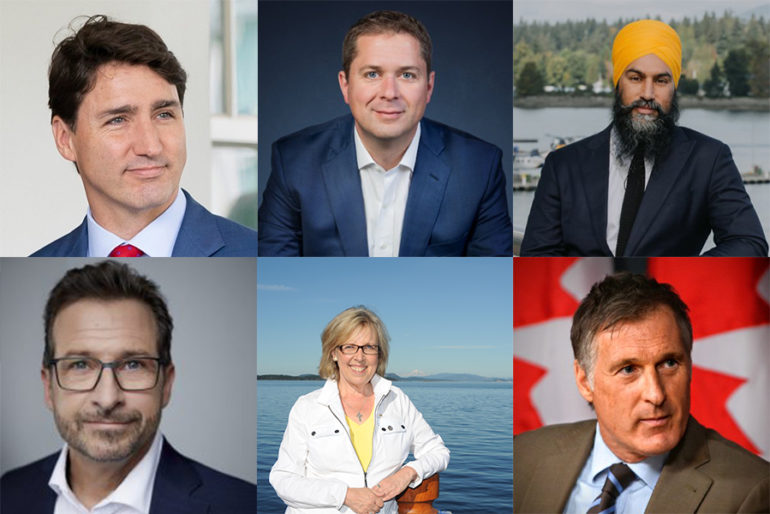 Voters in Canada have elected a minority Liberal government.

The latest results show the Liberals are leading or elected in 157 ridings compared to 121 for the Conservatives, 32 for the Bloc Quebecois, 24 for the NDP and three for the Greens. Jody Wilson-Raybould has also been reelected in Vancouver Granville.

The Liberals had braced for weakening support and have dropped from 177 seats at dissolution to157.

Despite their minority status, the Liberals had an almost complete sweep of the GTA capturing 43 out of 46 seats, including the whole of the city of Toronto. The Liberals held on their support in Toronto-Danforth, Davenport and Parkdale-High Park, where it seemed the NDP were most likely to make gains.

The most notable loss of the night was veteran MP and cabinet minister Ralph Goodale in Regina-Wascana, who lost to Conservative Michael Kram by 7,188 votes.

In an emotional concession speech, Goodale thanked his supporters and said, “Friendships and the bonds that have tied us together because they have been built out of mutual respect and trust.”

Prime Minister Justin Trudeau, speaking to his supporters in Papineau, said Canada has voted for an ambitious, progressive agenda. However, he did acknowledge the loss of support in Quebec and the west.

“I’ve heard your frustration and I want to be there to support you,” he said. “Let us all work hard to bring our country together.”

The New Democratic Party, which all but one of its seats in Quebec, dropped to 25 across the country. Hopes to take seats from the Liberals never materialized and the NDP instead saw its support dwindle.

“If you need medication in our country, we want to make sure you use your health card, not your credit card,” he said.

Singh also said that the election of a minority government is a clear sign from Canadians that they want a government that governs for them, not for the super-rich.

The Conservatives had 95 seats at the start of the election and pinned their hopes that voters wanted a change and hand them a majority government. However, despite being constantly neck-and-neck with the Liberals in the polls, the Tories only managed to gain 26 seats and will remain the Official Opposition. Their greatest success of the night was the complete sweep of Alberta (save for the NDP in Edmonton Strathcona) and Saskatchewan.

Speaking in his riding of Regina-Qu’Appelle, Conservative leader Andrew Scheer said their party has put the Liberals on notice.

“The fact is Canadians have passed judgment on this Liberal government,” he said. “Now, not only have they lost over 20 seats, but Mr. Trudeau has also lost votes and lost support in every region of the country.”

Scheer also assured supporters that a Conservative government is still in the cards.

“Remember 2004, Stephen Harper’s first election, he erased Paul Martin’s majority, and then went on to lead a conservative government that lasted for nearly 10 years,” he said.

With great expectations of increasing their presence in this election, the Greens have been elected in three seats, one in New Brunswick and two in B.C.

Maxime Bernier, who left the Conservative party following his failed leadership bid, failed to make any headway losing his seat of Beauce by a little under 3,000 votes.

“They showed extraordinary courage and passion exhibiting principles and policies,” Bernier said in his concession speech. “They did it despite nasty and shameless attacks from all quarters. They made huge personal sacrifices to offer voters a principled alternative different from that of all the other parties.”

The real success of this election belongs to the Bloc Quebecois. Rallying around a defense of the provincial government’s controversial Bill 21 has allowed the Bloc to not only reclaim official party status but also win 32 out of the 78 ridings in Quebec.

Speaking to supporters, Bloc leader Yves-Francois Blanchet said, “if what is proposed is good for Quebec, you can count on us. If what is being proposed harms Quebec, the Bloc will stand up and block it.”

According to public opinion polling, this has been the most uncertain election in decades. No party was projected to win a majority of seats.

The leaders of the major parties crisscrossed the country in the past 40 days trying to sell their vision to Canadians.

With about 27.4 million eligible voters in 338 ridings, the major parties have been doing all they can to bring their supporters to the ballot box before polls close tonight.

The Liberals under Trudeau ran on its record of environmental protection including its price on carbon. As with the last election, a re-elected Liberal government pledged to further cut taxes for the middle class.

Gun-control also become a key promise for the Liberals who proposed introducing stricter controls, while leaving the possibility of an outright handgun ban to the discretion of municipalities.

Andrew Scheer and the Conservatives, on the other hand, pinned their colours to the issues of fiscal responsibility and accountability. Attacking the Liberals for needing continued deficits to support its legislative program, the Tories pledged to cut taxes and excessive spending across the board, including the controversial carbon tax.

Continuing their criticism of Trudeau’s handling of the SNC Lavalin controversy, the Conservatives pledged to introduce fines of $20,000 on politicians who breach ethics laws, which they claim Trudeau has done.

The NDP has made considerable gains since Singh became leader, but did not come within striking distance of either the Liberals or the Conservatives. They promised ambitious social programs, including universal dental care and pharmacare.

Of all the leaders, Singh was considered to have had the greatest success in the last two debates and saw his party rise to 18 per cent in the polls.

The NDP also focused on affordability, promising to build 500,000 units of affordable housing over the next 10 years. Singh also said the NDP’s climate plan will create 300,000 new jobs.

Elizabeth May’s Greens hoped to grow their vote this campaign, proposing an ambitious climate plan that calls for a complete restructuring of the Canadian economy. This includes new emissions targets double of what’s proposed by the Liberals and NDP, and raising taxes on corporations and ending subsidies for fossil fuels.

After spending at least eight years in the political wilderness, the Bloc Quebecois, led by Blanchet, carved themselves a niche as the Quebec’s legitimate voice in Ottawa.

Key to their revival is their defense of Bill 21, Quebec’s religious symbols law. Bill 21 is popular among Quebecers but has been controversial, as critics have called the bill discriminatory.

This election campaign also saw its fair share of controversy.

Already coming off the ethical questions from the SNC Lavalin controversy, which saw the resignation from cabinet, and later expulsion from caucus of two former Liberal stars, Wilson-Raybould and Jane Philpott, voters got a glimpse into Trudeau’s past.

Photos from Trudeau’s time as a teacher in B.C. in 2001 surfaced showing the Liberal leader in brownface at a costume party. Further images also surfaced of Trudeau in blackface, once from the 1990s and from a talent show during his time as a student at Collège Jean-de-Brébeuf.

Trudeau immediately apologized for the incidents and said he deeply regrets donning black and brownface, but could not say how many times he has done so in the past.

Even in the dying days of the campaign, there was one last surprise in store.

On Oct. 18, the Globe and Mail reported the Conservative Party indirectly mounted a “seek and destroy” social media campaign against Bernier’s PPC with a goal to prevent him from participating in any debates.

Scheer did not deny that there was a campaign but distanced himself from the claims made by the Globe and Mail.

In response, Bernier lodged a complaint against Scheer with the Commissioner of Canada Elections. The PPC leader also said the campaign was a deliberate effort to mislead Canadians.

However, despite the scandals and controversies, the Liberals and Conservatives have not made significant gains over one another, and a minority government was the expected outcome.

In an effort to bring out his base, Scheer called the prospect of a minority government “one [Canadians] can’t afford.”

He instead brought up the prospect of an “NDP government with a Justin Trudeau face.” A hung parliament would result in a Liberal-NDP coalition government, Scheer said.

But in turn, the Conservatives falsely claimed in the waning days of the elections that the Liberals would legalize all hard drugs and the GST would be increased with a Liberal-NDP coalition.