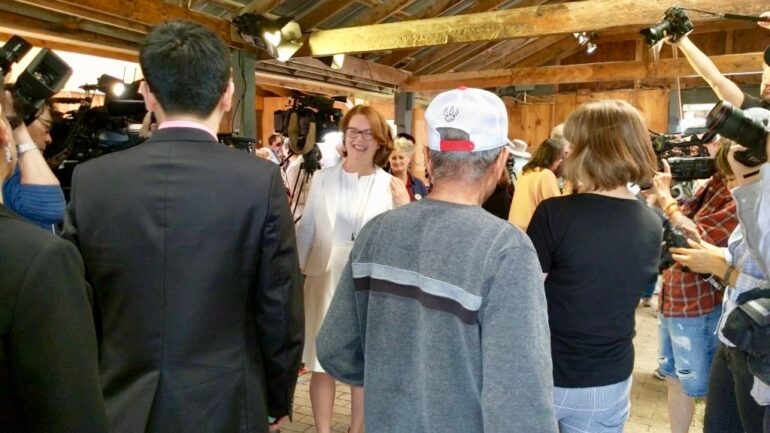 Jane Philpott announced on May 27 that she would be running as an independent candidate in the 2019 federal elections. (Alisha Mughal)

Jane Philpott announced Monday she will be running as an independent candidate in the October 2019 federal elections, months after being dismissed from Justin Trudeau’s Liberal caucus.

Only minutes before, Jody Wilson-Raybould made a similar announcement in her Vancouver riding, saying that she would be running as an independent.

There was speculation that both might join either the New Democratic Party or Elizabeth May’s Green Party.

Philpott was courted by May to join the Greens, who was disappointed by Philpott’s and Wilson-Raybould’s announcements.

While Philpott still intends to work with May and be her “ally,” she does not feel “100 per cent authentically Green” she said.

Philpott stood before jars of preserves and bunches of leafy greens at Reesor’s Farm Market in Markham-Stouffville, wearing a white suit because she didn’t want anyone to guess her words before she said them.

People spilled out of the small barn at Ninth Line and Elgin Mills — some had brought their dogs, others their bikes.

“We have all made this place our home,” she said. “So I want to start by acknowledging those who have gone before and cared for this fantastic land around us,” she said, breezing through the history of Markham-Stouffville, beginning with the Indigenous settlers and ending with those before her: “You brought your relatives.”

Philpott said she knew before she made her announcement that some would be surprised and others disappointed by her decision.

But the overwhelming wish among her constituents, she said, was that she remain in politics.

Philpott recounted instances of parents telling her of the impact her actions had on their daughters.

“When my daughter saw that you stood up for something that you believed in, and that you weren’t afraid to speak the truth, and you weren’t afraid to sacrifice your career — they have learned from that how to be courageous, and how to take steps not always knowing the outcome,” Philpott said, relaying a sentiment she’d encountered numerous times.

“I’m not done with federal politics,” she said.

The message she wanted to pass along to young girls was that of fearlessness. 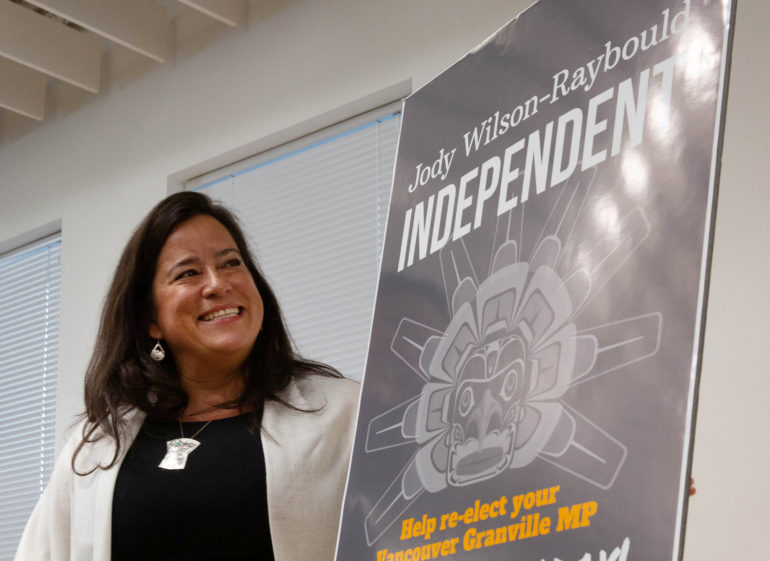 She said she would set a bad example, would teach no lesson, if she just walked away after being expelled by Trudeau.

Walking away from politics would mean capitulation to the fear, it would mean saying “You guys are too strong for me, I’m afraid of you,” she said.

When asked if she would ever support other parties, she said, “As an independent member of parliament, the way that I decide to vote will be based on three things.”

“First, what do the people of Markham-Stouffville think? Have I heard from them on this issue? That needs to be taken into serious consideration. Two, what does the evidence say? Study the issue, and find out what the evidence says as to how you should vote. Three, from time to time, my conscience will actually be a factor that will weigh in,” she said.

“In the right circumstances, of course, I would support a minority government in the broad sense.”

At the end of the day, Philpott’s announcement was about collaboration.

“We want to solve problems across election cycles, so we don’t have one party bringing in a whole range of initiatives and then as soon as the election happens, the next guys tear it all down and start with another whole range, and waste a lot of time and money in the process,” she said.

Directing eyes to the green land surrounding the farm, Philpott said, “Look around, those of you who can see [through] a door.”

“This is the place — one of the places on earth — that’s going to be affected [by climate change] if we don’t make some serious changes.”

“You ask a farmer — and there’s plenty of them in this room — you ask a farmer if they care about climate change, and they’re gonna tell you it’s a serious problem.” 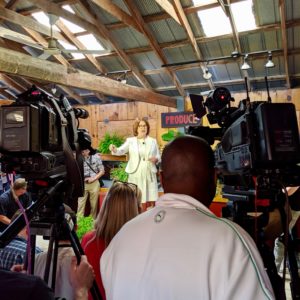 Philpott made her announcement in Reesor’s Farm Market in Markham, Ont., aware all the while of the history of the land on which Markham-Stouffville stands. (Alisha Mughal)

Philpott said there’s nobody better to summon this will than independent voices.

June Wiancko, a long-time housekeeper of Philpott’s, had been with Philpott when she was beginning her political career.

“She is just incredible,” Wiancko said. “She’s persevering. She’s come across the way we knew she would.”

Wiancko was confident that “four years from now, [Philpott] can run for prime minister.”

Women have been finding ways to get work done in face of a dearth of precedents for decades.

Just because there is no tradition of candidates running independently in Canada, does not mean it cannot be started, Philpott said.

And by starting it, Philpott again intends to serve as an educative example.

James Pogue, a Stouffville resident, said he intends to vote for Philpott in October.

“This is exactly the kind of person you would hope to represent you,” Pogue said. “I met her on the street even before she was elected at the beginning. And she struck me as an honest and smart candidate with a sense of humour.”

“We are Markham-Stouffville, we can’t change the whole global weather patterns, you know? You have to think globally and act locally,” he said.