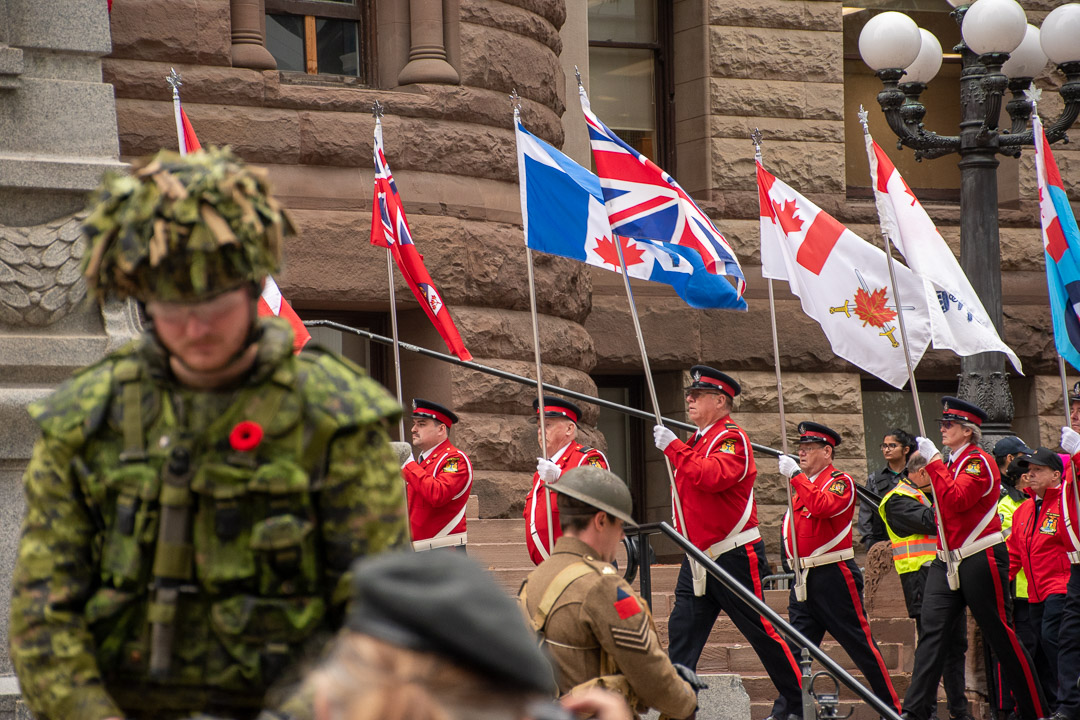 Mayor John Tory said that exactly a century ago, Torontonians gathered at Old City Hall at what was then a wooden cenotaph to remember the first World War.

“It is important for us to remember today, we can never forget the sacrifices of the past, but neither can we assume that the way ahead will be easy,” Tory said.

Nearly 10,000 Torontonians died during the war, he said.

“Their service and sacrifice will and must always be remembered,” Tory said.

Lt.-Gov. Elizabeth Dowdeswell highlighted the importance of peace and unity for Torontonians. 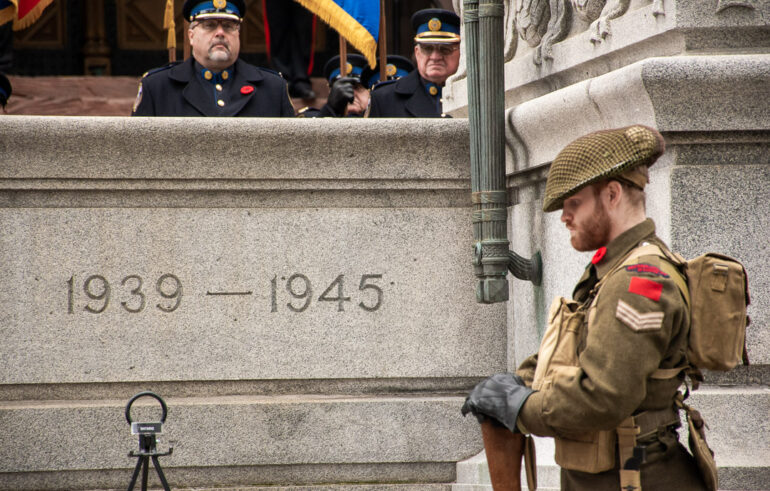 A vigil sentry stands by the Old City Hall Cenotaph as the national anthem is heard along Queen Street West and Bay Street on Remembrance Day. Photo credit: Jordan Griffith

She cited First World War veteran Lt. D.J. Macleod, who said “peace must be planned and sought with the same diligence, loyalty and determination” that is given to winning.

“Where there is disagreement, may we spark dialogue, where there is division, may we always strive to form unity,” she said. “We owe it to Canada’s fallen heroes to do whatever it is within our power to uphold the values that they fought for.”

Toronto resident William Mackay Baillie has been attending Remembrance Day ceremonies at the Old City Hall Cenotaph for 64 years and was present to honour his late father and veteran John James Baillie.

“I made a promise to him 24 years ago that I would keep coming as long as my health would allow it,” he said.

Mackay’s father was one of 23 Canadian recipients of the George Medal, awarded to people for acts of bravery in the United Kingdom and the Commonwealth. Baillie was the navigator of a Douglas Dakota transport plane that crashed and burst into flames near the Mydngyan airstrip in central Burma on June 14, 1945. 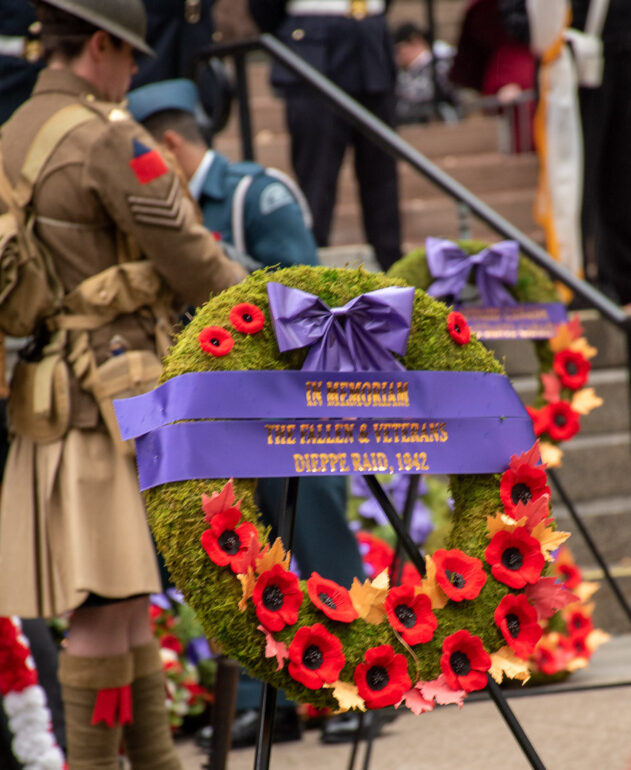 A wreath was placed by the Old City Hall Cenotaph to pay respect to the soldiers involved in the Dieppe Raid in 1942. Photo credit: Jordan Griffith

Friday’s ceremony marked many anniversaries, most importantly, the 80th anniversary of the Dieppe Raid, a battle against the German-occupied port in Dieppe, France. It’s widely known as one of Canada’s worst battles where around 916 Canadian soldiers were killed.

It also marked the 80th anniversary of the emergence of the Women’s Royal Canadian Naval Service. During the Second World War, these women were tasked with radio operations, coding, bomb marking, and much more.

Dowdeswell said this year is also the 150th birthday of physician Col. John McRae, the poet who wrote Flanders Fields.

Toronto resident Stefan Coward said it was important for the community to come together and celebrate Remembrance Day. Coward came to this year’s ceremony to celebrate and remember the people who fought to keep him safe, including his father, who served in the military.

“I think about how I wouldn’t be here today if my father didn’t fight and make it back home,” he said.

Coward said he thinks Remembrance Day is an important way to celebrate the country’s soldiers but also to acknowledge the lasting impacts of war.

“We are glossing over history. It’s a lot more important to list the truths rather than paint it over as if it never happened,” he said.