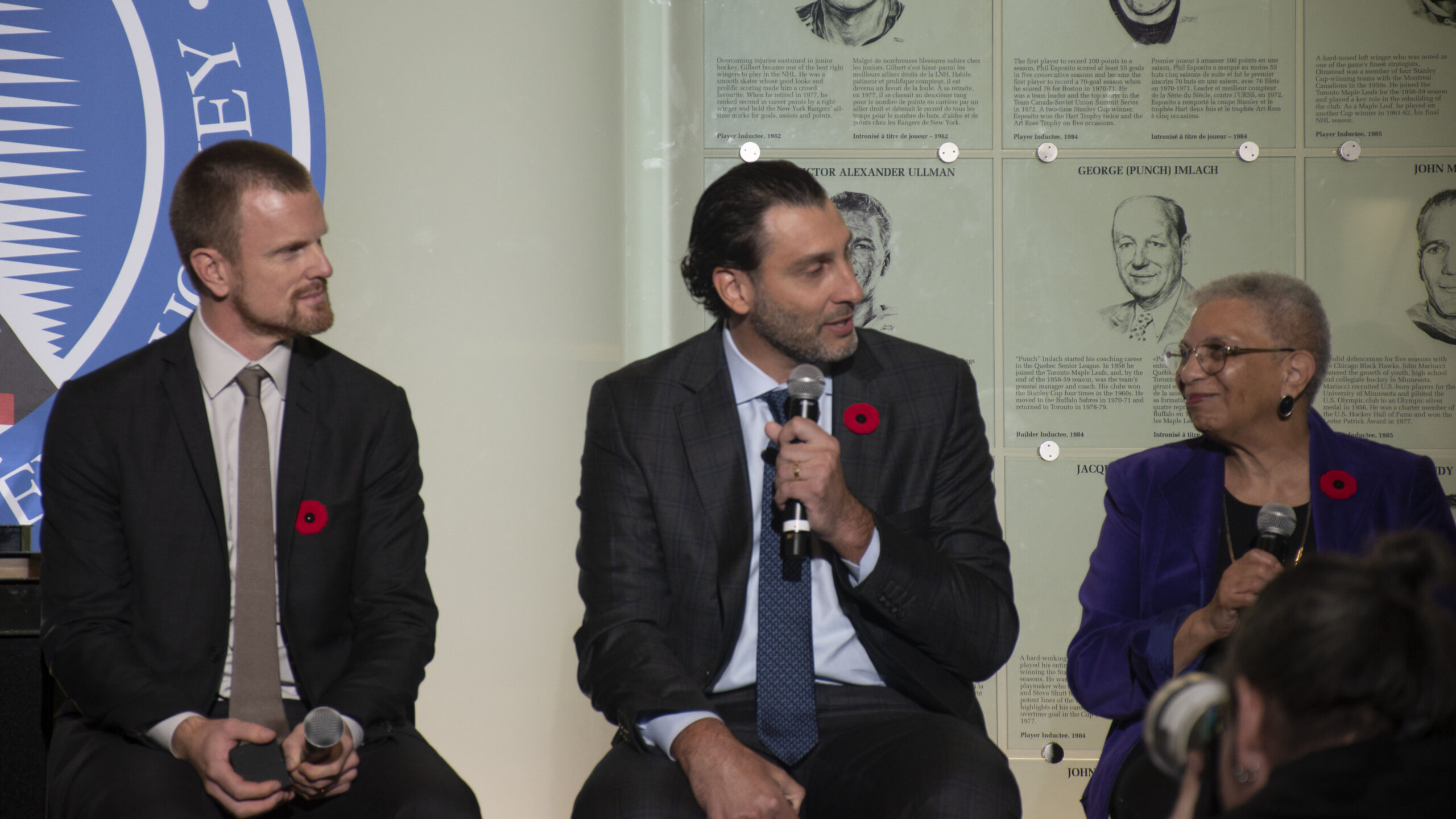 Retired Vancouver Canucks star Daniel Sedin never won a Stanley Cup. He came close in 2011 when he and his twin brother Henrik and goalie Roberto Luongo took the Boston Bruins to seven games.

But he did make it to the Hockey Hall of Fame, joining 293 players, 113 builders and 16 on-ice officials.

“I think this is the ultimate proof as a hockey player that you’ve done something good,” Sedin said.

The 2022 Hockey Hall of Fame Induction Celebrations kicked off on Friday with a ring ceremony at the Esso Great Hall in Toronto.

In attendance were Vancouver Canucks legends Daniel Sedin, Roberto Luongo, former Ottawa Senators captain Daniel Alfredsson and Bernice Carnegie, who received their Hall of Fame rings during Friday’s ceremony. Missing were Finnish women’s national team player Riikka Sallinen, and the other half of the Sedin twin duo and former Canucks captain, Henrik, after a bout with COVID-19.

Carnegie accepted the ring on behalf of her father, who was inducted as a builder.

The Swedish twins were selected second and third overall in the first round of the 1999 NHL draft by the Canucks, where they spent their entire 17-year career. They became the first pair of brothers in NHL history to score 1,000 points each.

Daniel Sedin said it was a tremendous honour to be inducted along with his brother and his closest friends.

“We’ve been through everything together, ups and downs, tough times and good times so it’s special,” he said. “Also going in with Roberto (Luongo) and Alfie (Alfredsson) it means a lot.”

Alfredsson won gold for Sweden with the Sedins at the 2006 Torino Winter Olympics and made a name for himself in the league after being initially selected in the sixth round of the 1994 NHL draft.

Alfredsson said his initial goal was to just reach the big leagues.

“You start your career, you just try to make it to the NHL, then you try and stay as long as you can,” he said. “Whatever happens after, happens after.”

The Senators’ all-time leader in goals, assists and points had to wait for his call to the hall after being left on the outside of his first four years of fame eligibility. Alfredsson said getting the call was “surreal.”

“We walked around, we saw our plaque and then you see all the other names, it’s truly humbling,” he said.

Over his 19-year career, the Montreal-native netminder won 489 games — the fourth most in NHL history. Even with the impressive numbers, Luongo told Humber News that he hadn’t thought about getting the call.

“When you play, you just think about winning games, winning the cup and being the best goalie you can be,” he said. “When I retired, more and more people started to bring it to my attention, and that’s when I started to think about it more.”

As of 2022, 293 players have been inducted into the Hockey Hall of Fame. To be added to that list is something Luongo needs to get used to.

“You look around the room and see some guys that you idolized growing up and some legends of the game even before you were born and to be mentioned in the same breath as them is something that hasn’t hit me yet,” he said.