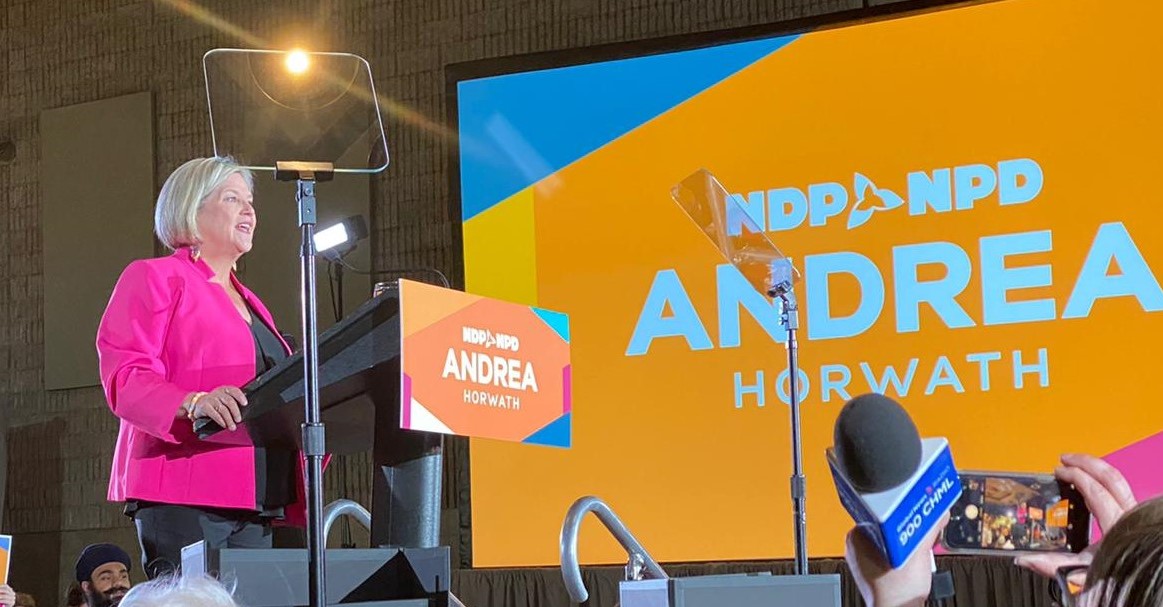 Ontario New Democratic Party leader Andrea Horwath has stepped down despite winning her riding of Hamilton-Centre in Thursday night’s election.

The Ontario NDP has been declared the official opposition party with 28 seats and leading in three, a drop from 40 in 2012.

“Thank you so much to the millions of Ontarians who made their voices heard,” Horwath told supporters at the Hamilton Convention Centre.

She made an emotional speech thanking her team that ended with her announcing she will be resigning as the leader of her party.

“It’s time for me to pass the torch, to hand off the leadership of the NDP,” she said.

But while the veteran leader is ahead in her riding, the Conservatives won 79 seats and were leading in four and the Liberals were elected in eight ridings.

Horwath voted this morning at 9:30 a.m. at Melrose United Church in Hamilton.

Horwath was sidelined from her campaign for a week after testing positive for COVID-19 on May 19. She continued her campaign virtually during that time.

The NDP had made several commitments on their official platform that include issues related to healthcare, affordability, education, and climate change.

They had proposed changes that will benefit the healthcare system such as hiring more nurses and PSWs, scrapping Bill 124, and addressing violence against healthcare workers.

Their climate plan aimed to address the urgency of the climate issue by reaching net-zero emissions by 2050, while protecting workers and creating jobs for Ontarians.

They also planned to increase the minimum wage by one dollar every year to reach $20 by 2026.

Horwath was elected as the MPP for Hamilton-Centre in 2004, and she became the official leader of the Ontario New Democratic Party in 2009.

The NDP was established as the official opposition party in 2018 by winning 33 per cent of the popular vote, after more than 20 years without official government or opposition status. The party gained 22 seats in the 2018 election, increasing its hold from 18 to 40 seats.