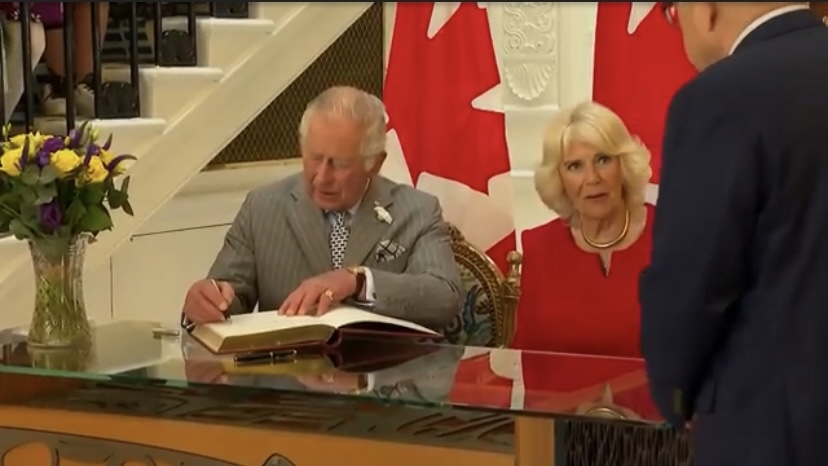 The royal family is back in town.

Prince Charles and his wife, Camilla, duchess of Cornwall started their three-day tour starting in St.John’s Newfoundland and Labrador.

The tour will run from Tuesday May 17 until Thursday May 19 in advance of Queen Elizabeth ll Platinum Jubilee that will mark 70 years as the monarch of the United Kingdom and commonwealth.

The couple landed in St. John’s earlier this afternoon and were greeted by a crowd of youth and supporters waving Canadian and British flags high and proud.

Prime Minister Justin Trudeau was also Newfoundland to greet the royal couple with a look of great excitement.

The royal couple’s tour is intended to focus on climate change and indigenous reconciliation.

The couple will visit provincial legislature, the Government House, and then the Heart Garden where they will meet with indigenous leaders to take part in reconciliation prayer to honour the lost children of the residential school crisis.

The next stop on the tour will be Ottawa and then they will make their way to the Northwest territories where they will end the tour.

Though many Canadians greeted the royals with open arms others are not feeling so welcoming.

Last month prince William and his wife Kate Middleton duchess of Cambridge did their annual tour of the Caribbean where the couple faced critique from Barbados for the Britain’s role in colonialism and lack of accountability in the slave trade and modern-day racism.

Tom Freda the co-founder and national director of Citizens for a Canadian Republic says this visit may ignite similar reactions from Canadians as the monarch has yet to comment on their atrocities of the past.

Freda says while the royals are visiting Canada to make amends for the past, the visit was organized by the Canadian government rather than out of personal will of the monarchs.

A study done by Angus Reid Institute last month showed that after the death of the current monarch Queen Elizabeth ll, 52 per cent of Canadians would rather not continue as a constitutional monarchy.

The Angus Reid Institute reported while most Canadians are on board with cutting ties with the British, 25 per cent do believe Canada should remain a constitutional monarchy.

Though 55 per cent of Canadians do not mind the current monarch Queen Elizabeth ll, the number did drop to 34 per cent when as their opinions if prince Charles takes the throne.

Freda said though it may seem the monarchs have a large impact on Canada, they are often absent and their commentary is attributed to their advisors.

“Keeping the monarchy is at the lowest it’s ever been. That says the popular opinion on the monarchy is low and if we go by the figures of the general public, it is logical to assume that politicians have similar views making it the best time to abolish the monarchy,” he said.