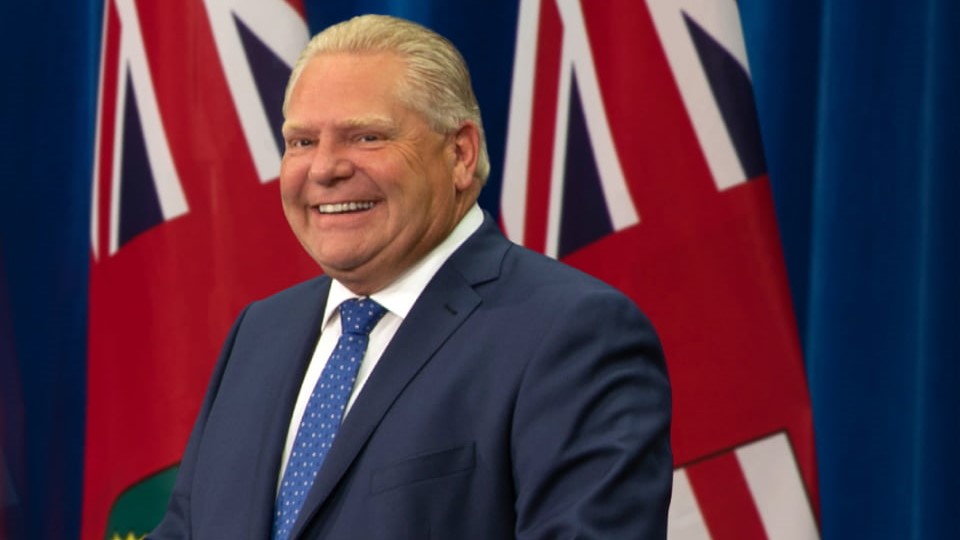 By Andrea Palacio and Janice Saji

Ontario Premier Doug Ford is hoping for a repeat of his 2018 provincial election victory as he moves forward with his campaign. And according to recent polls, he might well be on the way to achieving it.

According to the CBC poll tracker, Ford and the PCs are leading with a 36.8 per cent popularity vote.

Earlier this week, Nanos Research also released a poll stating Ford is leading the campaign as the preferred choice for Premier.

As the province gears up for another election, Humber News takes a look at Doug Ford and his story so far.

Douglas Robert Ford Jr. was born 57 years ago in Etobicoke, Ont., and is the second of four children of Ruth and Doug Ford Sr.

His dad, the co-founder of labelling company Deco Labels and Tags, initiated the family’s first venture into politics, serving one term as the Progressive Conservative (PC) MPP for Etobicoke-Humber from 1995-1999.

In 2010, Doug Ford Jr. replaced his brother, Rob, as city councillor for Ward 2 Etobicoke North when the latter was elected as the Mayor of Toronto.

He took his younger brother’s place in the 2014 mayoral election after Rob Ford withdrew from the race after being diagnosed with an abdominal tumour. Doug Ford lost the election to John Tory.

In 2018, Ford became the leader of the PC Party after the then-leader, Patrick Brown, resigned following allegations of sexual misconduct. Eight weeks later, his party won a majority government, and Ford became the 26th Premier of Ontario.

Since coming into power, Ford’s government has made some significant changes like removing the cap-and-trade system, that helped reduce the pollution emissions. He also passed legislation to get rid of half of the city councillors’ seats in Toronto.

One of his most controversial decisions was the announcement of the closure of Office of the French Language Services Commissioner.

And there were other moves by Ford that drew criticism.

Toronto Metropolitan University professor Wayne Petrozzi, an expert in political theory and comparative politics, said the Ford government’s going to the Supreme Court to overthrow the carbon tax, invoking the notwithstanding clause and violating the charter of rights, and the “disastrous approach to the pandemic” that “cost thousands of Ontarians their lives” are among actions by the premier that will be under the spotlight this election.

Ford is avoiding taking responsibility for the mistakes he made during the first two and a half years of his term, Petrozzi said.

Political expert Andrea Lawlor, an associate professor at King’s University College at Western University in London, said Ontario voters have had a lot of uncertainty in the last four years, and they desire continuity right now.

So, its better to vote for a “politician you know, than one you don’t,” she said.

While Ford has led the polls so far, initial domination isn’t an indication of an assured victory.

Petrozzi said the trajectory of the election can change depending on whether the opposition parties force the Ford government to explain their mishaps and shortcomings.

Lawlor said the PCs’ failing to focus on “wages over cost of living and affordability, as well as housing” could hinder Ford’s chances of winning.

She said the issue of affordability has been addressed by the Liberals and NDP and could negatively affect Ford’s race since he’s been silent regarding it.

Petrozzi said his promises of payments in the past six months, like getting rid of license plate renewals and allowing people to avail the money immediately, have helped him attain positive reactions.

Ford has been spending money at an “unprecedented” rate and his recent initiatives are an explanation for his lead in the polls, he said.