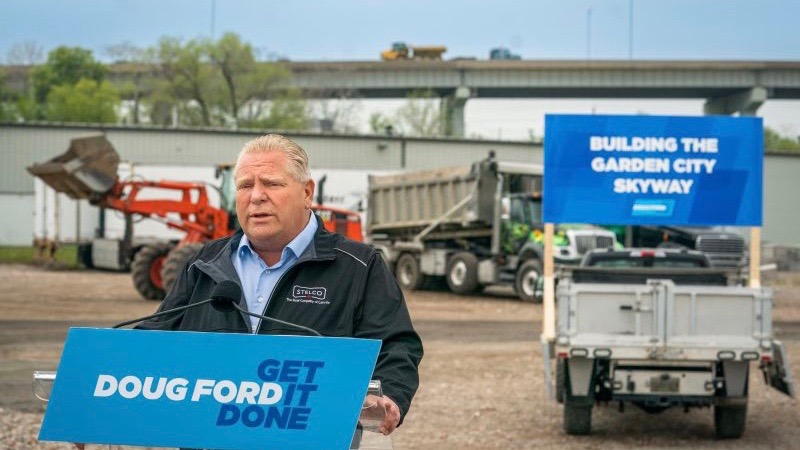 Ford confirmed to a crowd in Niagara-on-the-Lake that he tested negative for COVID-19 today.

It came amid news that NDP leader Andrea Horwath and Green Party leader Mike Schreiner had previously both tested positive just a few days after they participated in Monday’s leaders’ debate without masks.

A representative from Ford’s team also confirmed the negative test result to Humber News in an emailed statement today.

“It’s been more than 48 hours, so he’s not considered a close contact,” the statement said. “He’s not experiencing any symptoms. He’ll continue following public health guidelines.”

Reporters also asked Ford about an announcement that the Supreme Court of Canada will hear the Ford government’s appeal to block the release of his mandate letters.

When questioned why he was keeping the letters secret, he said “it’s not secret” before moving on to focus on his party’s promises to continue building.

Ford was in Niagara-on-the-Lake to announce a “massive rehabilitation” of the existing Skyway Bridge which will include a full deck replacement. Alongside it, he promised to build a new bridge to carry Toronto-bound traffic while the existing bridge will carry Niagara-bound traffic.

Twinning the Skyway will further connect St. Catherines to the rest of the Niagara Region and improve commute times, Ford said.

The announcement is part of the PCs’ larger plan to invest in infrastructure which notably includes building Highway 413 and the Bradford Bypass.

University of Windsor Associate Professor of political science Emmanuelle Richez told Humber News the projects will create many jobs for Ontarians – a key element of the PC platform.

“What the conservatives are trying to do here is get the vote of workers, which is traditionally a vote that goes NDP,” she said. “The other thing is there’s been a lot of focus on infrastructure in the GTA because this is an area that is rich in terms of riding and no party can gain government without the support of the GTA.”

Ford also criticized the Liberals and the NDP for not investing in the Skyway Bridge and says the PCs will “get it done.”

Later on, when questioned about his campaign’s COVID protocols, Ford said he is following advice from Dr. Kieran Moore – his government’s Chief Medical Officer of Health.

“We’re following the protocols from Dr. Moore and we’re going to continue to follow them right up till the election and after the election,” he said.

While two party leaders are now campaigning virtually, Richez said the topic of COVID-19 has not been discussed much by the parties.

“What we’ve seen so far is that all parties are trying to avoid the topic of COVID,” she said. “Leaders don’t want to talk about it because they know the electorate is tired of talking about it.”

And while Ford didn’t say much about the announcement about his mandate letters, Richez said it may not have a major impact on the election as Ontarians are focused on other issues.

“It definitely doesn’t look good for the conservatives but it’s such a niche topic that’s not really in Ontarians’ priorities at the moment,” she said.