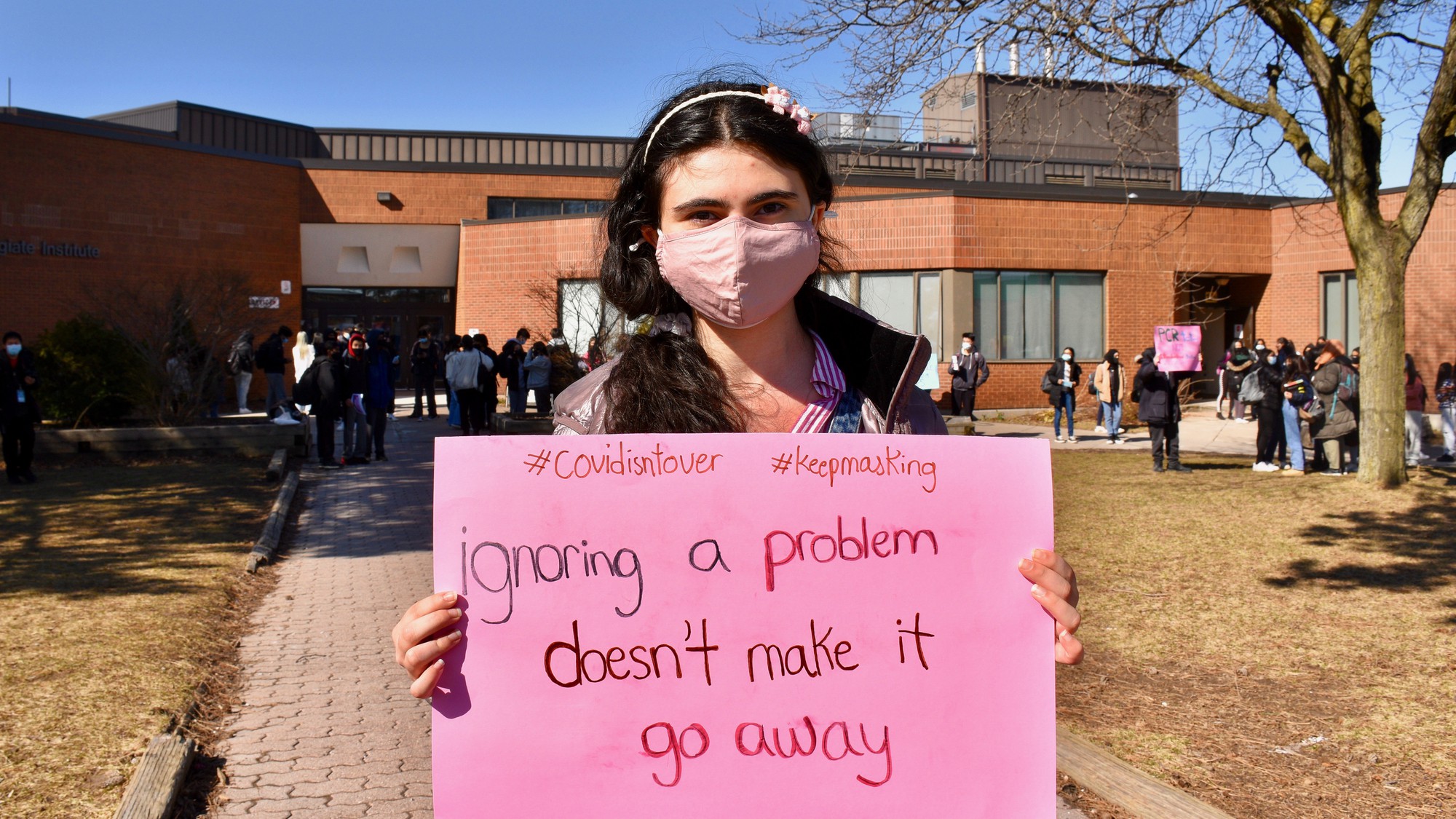 Ontario students walked out of classes March 21 in protest of lifting mask mandates in schools.

Students at Albert Campbell Collegiate in Scarborough staged a walkout at 11 a.m. carrying signs and chanting their demands in front of the school.

The Ontario government had previously announced mask mandates would be lifted today in most settings, including schools.

The protest was organized by the student advocacy group Ontario Students for COVID Safety.

Sophia Alexanian, one of the chief organizers of the group, said that students from more than 50 schools across Ontario signed up to walk out of classes today, with “over a dozen schools just in the TDSB.”

“What you’re seeing here is a small representation of what we’re having across the province,” she said. “It’s the high school students, it’s not the most vulnerable or elementary students who can’t get vaccinated yet. 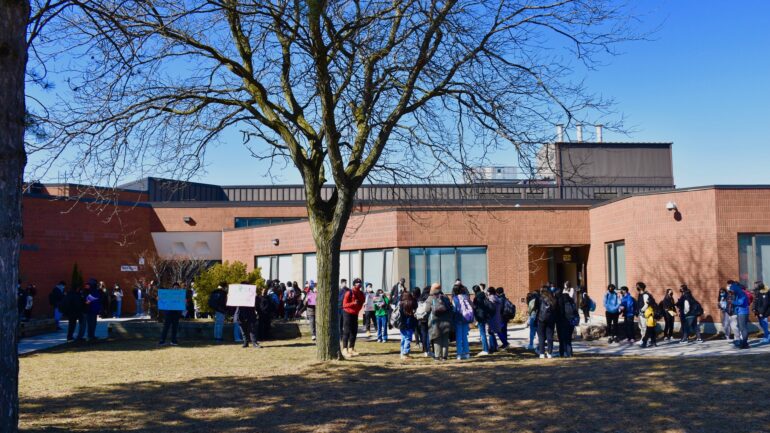 Students protesting outside Albert Campbell Collegiate on March 21 say they are against lifting the mask mandate. Photo credit: Vina Nguyen

Today’s walkout is a joint action with another student group, the Manitoba Students for COVID Safety.

Brie Villeneuve, an organizer for the group, said in an emailed statement that around 10 schools signed up for the walkout in Manitoba.

They said the two student organizations have been communicating virtually and hope the joint movement will inspire other Canadian students to form their own advocacy groups.

The Ontario Students for COVID Safety was formed in January to advocate for continued COVID-19 data collection, expanded access to PCR testing and providing students with N95 or KN95 masks.

The group has since started a petition and wrote a letter to Ontario’s Minister of Education Stephen Lecce with their concerns.

“Our group has taken previous actions and the response from the provincial government has not been satisfactory, it’s been really unfortunate,” Alexanian said.

The province has already denied requests from some school boards to extend the time before lifting mask mandates.

Ontario’s Chief Medical Officer of Health Dr. Kieran Moore said in a letter to the Toronto District School Board denying a request to extend mask mandates that the province is moving towards more normal in-person learning.

The Toronto District School Board said in an online statement that they will strongly encourage mask wearing and called on people to “respect the individual choices that other people make.”

Others in education are also concerned about the move to end masking.

“We should be listening to some of the school boards,” she said. “School boards are being told by the minister that they have no choice in this matter but a lot of boards are actually expressing concern that it’s moving too quickly.”

Stiles said she applauds the student advocacy group for speaking out for their fellow peers.

“These students are raising some really important concerns that the government must listen to,” she said. “Students are experiencing what’s happening in our education system more directly than the Minister of Education.”

The Ministry of Education didn’t respond to an interview request from Humber News.

Some students who initially adhered to provincial COVID-19 guidelines are now speaking out for the first time with the end of the mask mandate.

“I just sort of stood by but when Doug Ford says he’s lifting mask mandates, this has gone too far. I’m joining the rally,” Kong said.

Kong’s classmate Nilapan Lava said he found out about the walkout from his friend earlier today but has been concerned about the change to end masking.

“I just thought COVID cases were going to rise again,” he said. “I don’t want COVID cases to rise because then we’re going to go back to online school, which I don’t really like.” 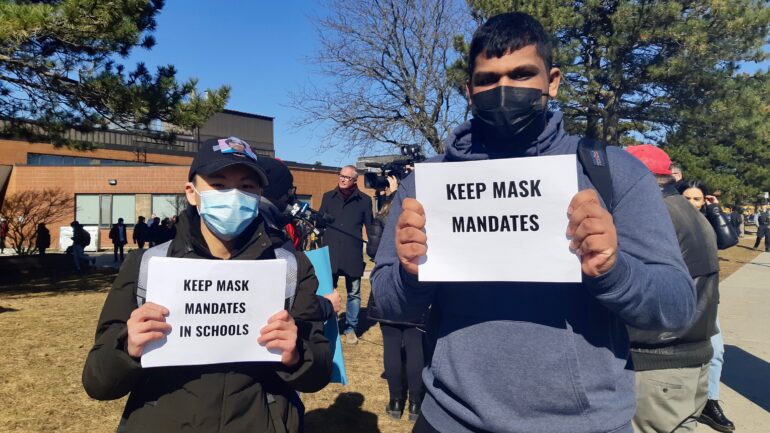 Stiles said there are few formal ways for students to be heard within the government.

“They are our future and a lot of those high school students will be voters in this election that’s coming up in June,” she said. “So I do hope Mr. Ford is listening to them because they’re really upset right now.”

And while students have been vocal about their concerns, they have also seen pushback from community members.

Alexanian said organizers within her group who spoke to the media were later harassed for speaking out against the lack of proper safety protocols.