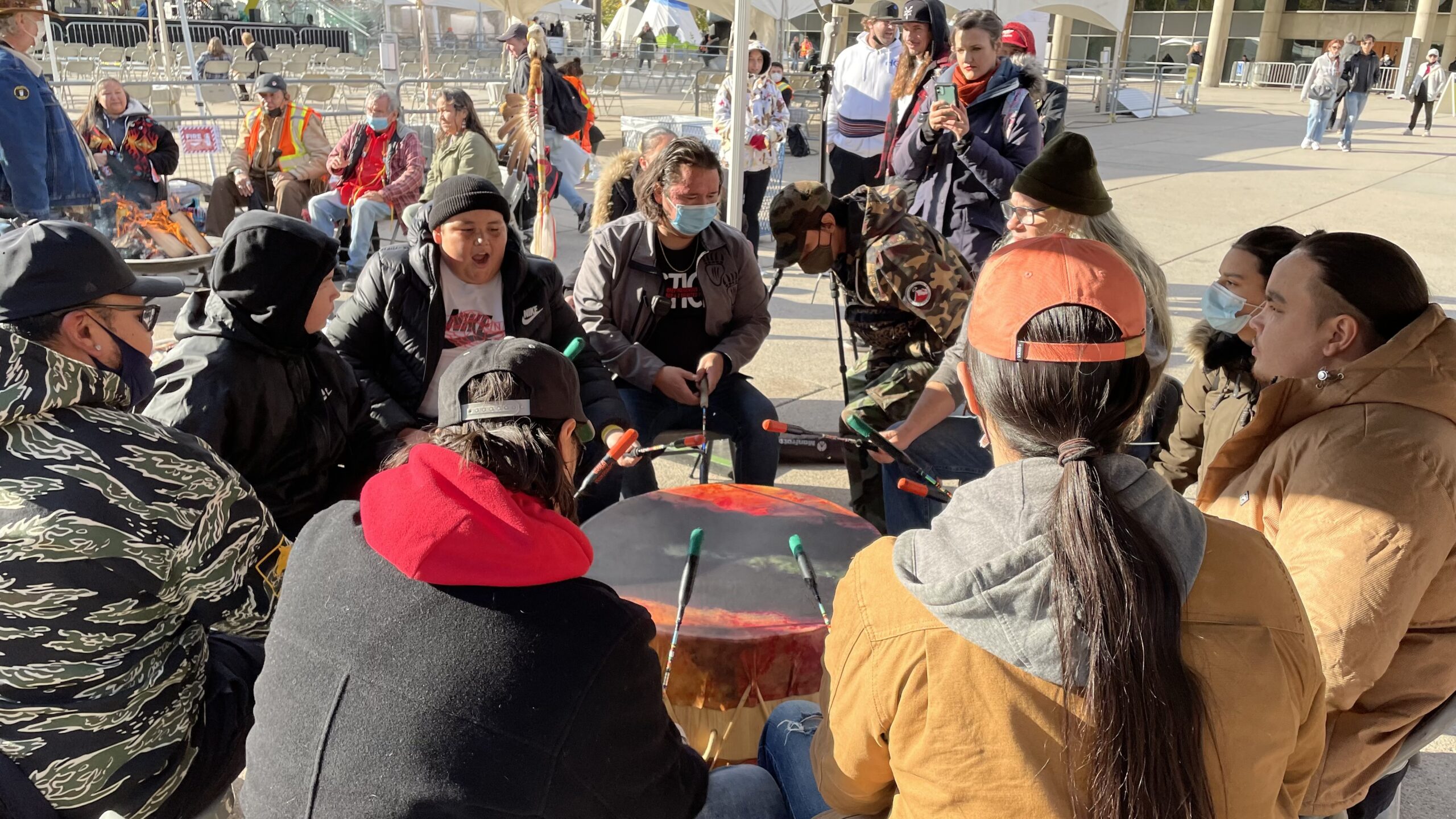 Lisa Odjig Mchayle held one goal in mind during her hoop-dance performance in downtown Toronto — to honour her Indigenous brothers and sisters found in unmarked graves at residential schools across Canada.

“I promise them in my prayers that I will share these dances with everyone,” Mchayle said. “I know that they would want us to keep our traditions strong and alive.”

Forming symbols of nature while dancing to the beat of the music, Mchayle, an Odawa, Ojibway Nation, featured her community’s storytelling “hoop dance” during the fourth annual Indigenous Legacy Gathering.

The gathering, organized by the Toronto Fire Native Cultural Centre, was held at Nathan Philip Square on Nov. 4 and 5. It highlighted Indigenous people’s culture, traditions and languages to honour the lives lost and changed by residential schools.

“This gathering was about bringing our community and supporters together, letting them feel welcomed, to feel listened to, and to heal,” Andrea Chrisjohn said.

“The gathering allowed our people to embrace their national identities through their voices, languages and practices, denied to them in these institutions,” he said.

It began with a sunrise ceremony, followed by guest speakers during the morning and afternoon performances that featured traditional dances, tribute songs, and short films.

Teepees designed by Indigenous artists dressed up the surroundings of the main stage. Inside them, Indigenous advocacy organizations gathered signatures for petitions and sold handmade crafts.

A sacred fire remained vivid during the gathering, as a focal point for prayers and offerings of tobacco.

“We used it to light our way when we pass into the spirit world,” Anthony Glaude said. “The sacred fire will be there for four days to guide us to our ancestors.”

Glaude, of Plains Cree Nation, came from Northern Alberta to shed light on the legacy of residential schools alongside his brothers and sisters.

“To walk down that healing path, we need to do it together, and that’s what I am doing here at the gathering,” Glaude said.

Gathered with nine other men, Glaude showcased his community’s tradition during a drum play intended to recreate Mother Earth’s heartbeat.

The Big Drum sound was accompanied by chants sung by men sitting around the drum and three women standing up behind them.

“That drum gave peace in a war between two nations,” Glaude explained. “Today, we are gathered around it with the same purpose, find peace.”

This gathering also promoted the Spirit Garden installation to be built in Nathan Philips Square by 2023. Responding to the Truth and Reconciliation commission call to action, this Indigenous cultural space will be constructed to honour residential school survivors.

“The Indigenous Legacy Gathering celebrates and honors the resilience of residential school survivors and their families and is an important form of reconciliation,” he said.

“Indigenous communities are trying to work together with government institutions,” Mchayle said. “This gathering sets a great example, is a first step in the right direction.”