A phalanx of police officers stared down protesters who were supporting about two dozen homeless people who were being kicked out of a west Toronto park on Tuesday, June 22. 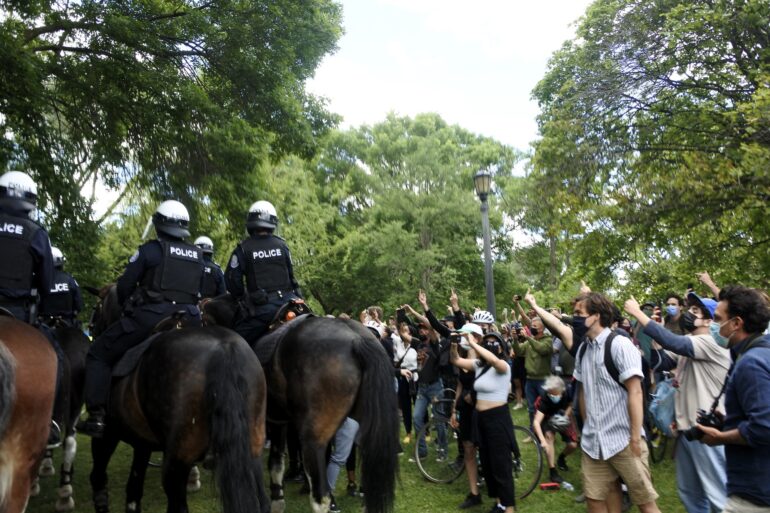 Toronto Mounted Police unit arrives at Trinity Bellwoods Park as supporters start to get heated. They walked back and forth to scare the crowd away. Photo credit: Jaeybee Martinito

During the standoff which began early in the day, the city moved to enforce trespassing violations against about 25 people living in “Tent City.” The city said the campers were offered indoor space, with access to meals, showers and laundry earlier this month.

Related story: Toronto reports highest number of deaths in its shelters in 2020.

Police and a private security company were brought in to allow city staff — armed with trespass notices issued 10 days — to remove up to 25 people and their structures in the encampment at the Queen Street West and Strachan Avenue park.. 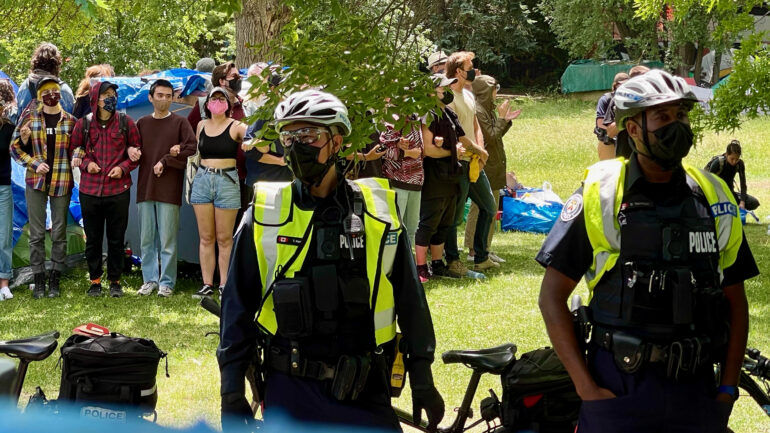 Protesters link arms to protect a tent in Trinity-Bellwoods Park in west Toronto as city crews move in to dismantle them. About 25 homeless people who were living in the park were evicted. Photo credit: Jaeybee Martinito

Police confirmed three people were arrested including the protest. They are Rebecca McKay, 32, charged with assault with a weapon, Devon Sutherland, 23, charged with assaulting an officer, and Jeremy Magyar, 33, who is charged with two counts of possessing weapons dangerous. Court dates were not immediately available.

Elizabeth Gallou, who came out to support and advocated for the unhoused people, said she knew some of the campers through outreach programs she is part of with the Encampment Support Network.

The ESN describes itself as an ad hoc volunteer group offering support to people living in six park encampments throughout Toronto. 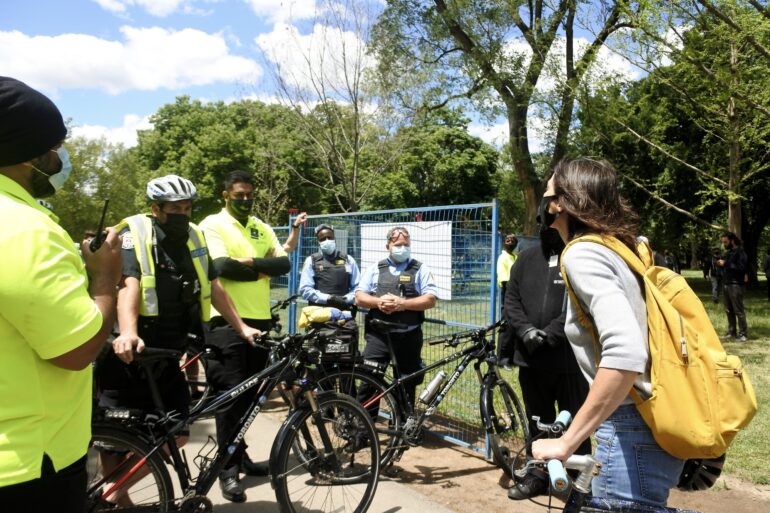 “I hate that the system doesn’t see what it’s doing to perpetuate the ill,” she said.

Gallou said the campers are like any normal people going through a rough time in life and that them into an institution could traumatized people again.

Tears filled her eyes as she shared some personal stories with the homeless.

Police pepper sprayed at least one person when the showdown escalated into a conflict at about 2 p.m. with the crowd of supporters.

Protestors started shoving and pushing blue fences, installed around the encampment June 22 to separate the homeless from the protestor. But as some were yelling and chanting “these are our neighbours,” others climbed the fence to create a human chain guarding the tents.

As it escalated, a group of Mounted Police officers arrived and walked back and forth to scare away the crowds. They were later backed up with the Public Order Unit, used for crowd control.

Ward 4 City Councillor Gold Perks said in a statement the eviction shows the government failed to treat housing as a human right. 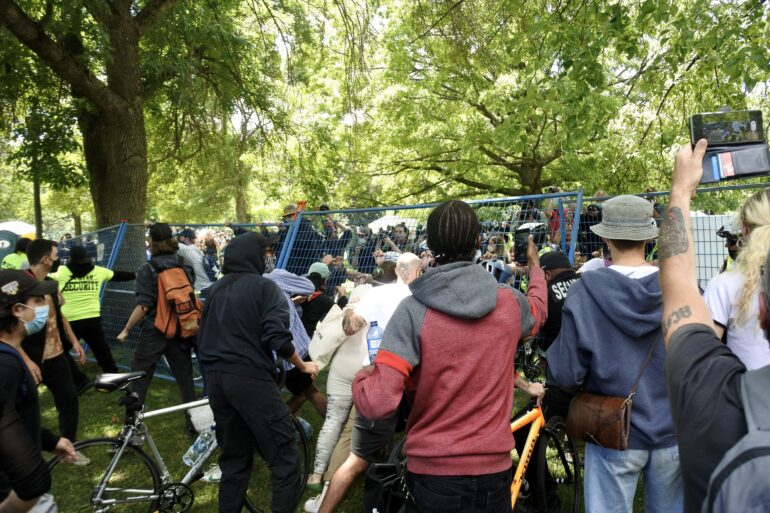 A crowd of supporters and protestors topple fencing surrounding the encampments after about 25 people were evicted from Trinity Bellwoods Park on June 22. Photo credit: Jaeybee Martinito

“Going forward we have to redouble our efforts to change our housing system, build real supports for people in need,” he said.

The city said police were called in to support city crews removing the reported 65 structures that were part of the encampment. The city also argued the encampments are not a solution to homelessness and the health risks are “complex and serious.”

The city also reported there has been 114 fire calls in encampments so far this year, including nine in the past week, and seven people died in encampment fires since 2010.

The other encampments are or were in Moss Park, Lamport Stadium, and Alexandra Park.