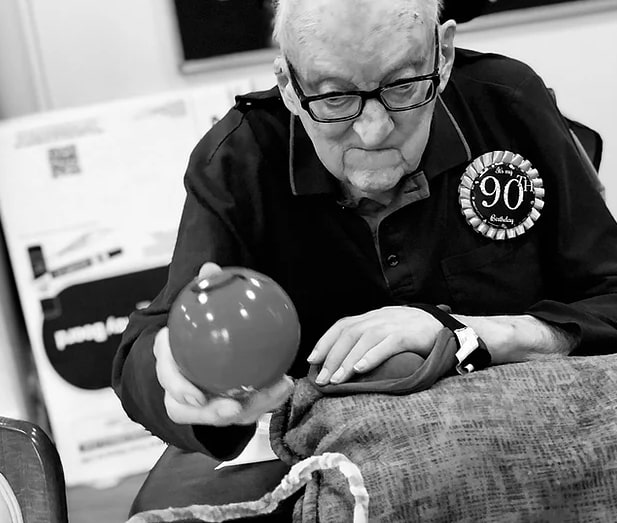 Kate Hatfield said watching her grandmother struggle with Alzheimer’s Disease can be emotionally draining. Not being able to physically see the 86-year-old for more than a year was gut-wrenching for the Mississauga woman.

Hatfield, a Waterloo Region District School Board teacher, said her grandparents are in a long-term care home in Streetsville.

“We’ve actually seen a deterioration with her Alzheimer’s, and we think a lack of socialization plays a big role in that as well,” Hatfield said.

The Ontario government opened long-term care homes on May 22 to visits from family and friends.

Dr. Merrilee Fullerton, the province’s Minister of Long-Term Care, said in a press release the government put the safety of residents at the heart of what it is doing.

Upon hearing the announcement, Hatfield and her sister went to visit their grandparents in their Albert Street long-term care home, in the Queen and Thomas Streets area, on May 23.

“It was awesome,” she said. Meeting her grandparents face-to-face was definitely different — and better — than meeting virtually.

“Communication is a lot easier, especially with my grandmother. She’s sometimes less responsive to virtual FaceTime so seeing her in-person and much more active and respond was absolutely incredible,” Hatfield said.

“You could tell from their demeanours, they were very happy to be able to sit outside with us and see us face to face,” she said. “It was emotional. I got teary-eyed and although my grandmother didn’t remember us, our grandfather cried.”

The visits aren’t a free-for-all though. Along with the Office of the Chief Medical Officer of Health, the Ministry of Long-Term Care updated its visitor policy and released a guidance document for specific measures including screening and outbreak management.

Under the new changes, a maximum of two visitors can see a resident at once, not including children under two. Visitors need to be actively screened at arrival and won’t be permitted to go indoors.

Hatfield said these are welcome changes, especially to provide support for cognitively-declining seniors.

According to the Ontario government, an estimated 96 per cent of long-term care residents have been fully immunized as of May 21.

However, Mikaela Wilson, co-founder of Senior Support Services, said it’s frustrating that it took this long for long-term care homes to accept visitors.

“Retirement homes and long-term care homes were in the first wave of vaccines, so everyone has been double vaccinated for four months now. Why has it taken that long for people to be able to see their loved ones?” she asked.

Wilson’s care company for seniors in southern Ontario provides a range of support, from cognitive and physical support to social interaction and stress reduction.

“We lost so many clients. Not because of COVID, but because of isolation,” she said. “We had three clients go from almost 24-hour care to nothing. And they’d pass away.

“With the excellent uptake of vaccines in long-term care homes, it is the right time to make this very meaningful change that will benefit residents and their families,” she said in the statement.

Wilson, an essential caregiver, is a part of the 99 per cent of essential workers in the province that have received at least their first dose.

“We’ve come a long way, we know how it spreads, we know what to wear, proper PPE. People get tested every time they walk into long-term care homes and they’re vaccinated,” Wilson said.