SAULT STE. MARIE, Ont. — After a long and gruelling 14-months off the ice, there is some light at the end of the tunnel for Ontario Hockey League (OHL) teams. After a May 13 announcement, there is hope for the 2021-22 season will resume on Oct. 7.

For the Soo Greyhounds Head Coach, John Dean, time away from his team has been challenging, but it gives the team hope after the news of the start date.

“Just to have something that’s written in stone for us to look forward and plan for,” he said. “We always hold our breath when it comes to COVID, but something feels real about it. It’s exciting to talk to players about it and recruits.” 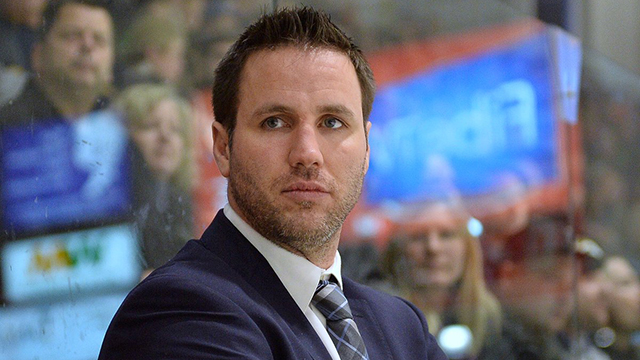 Head coach John Dean of the Soo Greyhounds, seen here in July 2018, said his players are excited there's a start date for the Ontario Hockey League.

It’s refreshing for Dean, 40, to hear enthusiasm coming from the athletes. Although they haven’t had a formal meeting, he can tell they are eager.

“I think they’re (players) excited,” he said. “I haven’t had a ton of conversations, to be honest, about start dates with the guys.”

Dean said he senses the excitement among teammates after the announcement.

There is no official plan in place for how the season is going to roll out. However, the OHL stated in a media release training camp is scheduled to begin Sept. 4 and the league plans to host an entire 68-game regular season.

The statement also indicated the regular season will end on April 3, 2022, and playoffs begin April 7 and run until May 30 at the latest.

Commissioner David Branch says the league is in the process of developing a regular-season schedule and the OHL 2022 Memorial Cup has been scheduled for the beginning of June.

“It’s just a date right now,” Dean said. “Everything in terms of a plan is very much, I believe, kind of a moving working platform right now because anything can happen in the league as we all know too well these days.

With the announcement being so fresh, Dean says the team is in the hands of the Algoma Public Health Unit, and as the start date approaches, then more extensive conversations among the league will begin.

“We’re really at the mercy of what local rules are in the local health units, so I’m sure those things will come closer to the actual start date,” he said.

Dean says the plan is to discuss a team strategy in early summer for the upcoming season.

“We’ll probably sit down sometime in June and discuss how we want to approach next year,” he said.

At this point in a team’s life, the coaching staff would review the previous season’s mistakes and discuss with the players ways to improve. But Dean said it was a very different season for the team, and because the team didn’t play, he says this year’s conversation will focus on bringing the team together after being apart for so long.

“It will probably be a little bit different of conversations,” he said. “How we want to make sure we get the guys bonded quicker than normal and the feeling like a group, like a team because, frankly, it’s almost going to be about 18-months since we’ve been together.”

Right-winger Cole MacKay says it’s been challenging not to play and finds he’s wrestling with himself to find different hobbies during his time away from the ice and his team.

He says the team has been enjoying Zoom calls and staying in communication with one another.

“We have full team Zoom meetings once or twice a week,” MacKay said. “We’ve been keeping in touch through social media and texting each other nonstop, so we’ve gotten creative with that.”

Not only has it been a long 14-months for the team, but fans have also not stepped foot into the Greyhound’s home at the Memorial Gardens since the pandemic started.

Kyle Raftis, Soo Greyhounds general manager, says in regards to fans, it will be based on the government’s health and safety guidelines to determine if fans can attend games.

Dean says that conversation will likely be discussed later.

“I’m sure they’re discussing it behind closed doors, but again, really at the mercy of public health units and what’s happening in the community at the time,” Dean said.

Raftis says as far as he knows, the league has not made the vaccine mandatory for players and there hasn’t been any formal discussion.