Average screen times have increased for most adults during pandemic

Screen time and accessibility to digital devices reached an unprecedented high during the COVID-19 pandemic, according to a 2020 report.

The survey by United Health Care Services and sponsored by Eyesafe, states people are spending as much as 13 hours or more a day in front of screens since the pandemic began.

That’s an increase of four hours per adult since a similar 2019 survey.

United Health Care Services conducted the online survey in July 2020. The survey sample consisted of 157 eye care professionals and feedback from 500 representatives of small, medium, and large businesses in the U.S.

Blue light exposure has become a big concern with increased screen times and, according to the survey, the most cited symptoms include sleep disruption, dry eyes, and headaches.

Melanie Rudd, a nursing student at Ryerson University, spends roughly eight hours in front of her screen a day.

Checking her phone is one of the first things she does when she wakes up each day, she said.

Rudd often finds herself feeling “sick” during portions of the day and often gets a headache from prolonged exposure to blue light.

“I do find that using dark mode, which Apple has, does help, especially on my phone because I find it’s easier on the eyes,” she said. 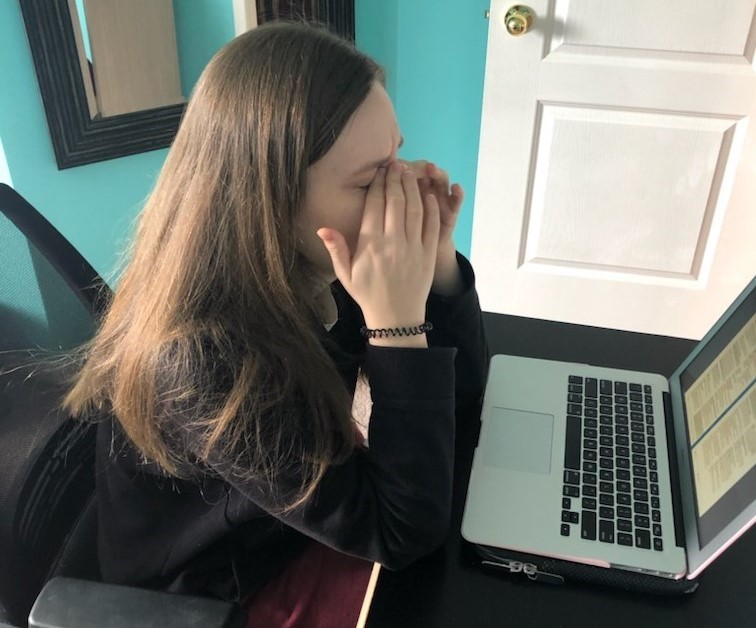 Dr. Shamroze (Zay) Khan, an optometrist and associate professor at the University of Waterloo’s Optometry and Vision Science department, said blue light is not the only thing causing damages to people’s vision.

“There was a study that was done on how blue light might affect a part of the eye called the retina,” Khan said. “But the thing about the study is that it was done in cells in vitro. So, it wasn’t within the eye itself.

“And the story got picked up by media,” she said. “So there suddenly became this fear or panic and the headline was blue light causes damage to the eye.”

It is a regular part of the everyday light spectrum, Khan said. In fact, it’s considered a mood regulator.

“The concern about blue light has come from the fact that because it’s shorter wavelengths and it’s higher energy, things that are higher energy can cause damage sometimes,” she said.

Khan says the concern stems from screens, such as computers, are backlit with lighting, like LEDs, which produce significant amount of blue light.

Despite the focus on the effects of blue light and eye care, experts like Khan are now questioning a correlation between screen time and myopia, or short-sightedness.

“Myopia is on the rise globally such that we’re expecting half of the world to have myopia not very long from now,” Khan said.

This theory is that humans are not looking out in the distance, as hunters and gatherers did. Instead, the world has become closer with the proximity of screens such as TVs, she said.

Individuals in their late teens and early 20s, who are exposed to excessive screen time, might increase some of the myopia progression, Khan said. But more research is needed to determine if there is a correlation, she said.

While there is no concrete evidence to refute screen time as a major contributor to conditions like myopia, Khan encourages people to still be cautious of their screen time and practice what she calls 20-20-20.

“Essentially [it] stands for, after every 20 minutes of screen time, you look 20 feet away, in the distance, for 20 seconds,” she said. “Make sure you’re taking breaks.”