KOROSTYSHIV, Ukraine — Among all the winter holidays, Epiphany in Ukraine includes traditions that are literally freezing.

The Eastern Orthodox celebrated Jesus’ baptism on Jan. 19, an event marked by Ukrainians testing their courage in the Yordan River, also known as the Jordan River.

People cut cross-shaped openings on frozen rivers and lakes with and jump into ice-cold water following religious ceremonies. It is believed those who submerge their bodies into the water three times are going to be blessed and healed from illnesses.

This ritual has gained popularity in the past several decades. Even those who do not truly believe in the ceremony dive into the water for the adrenaline rush and unforgettable experience.

People were taking part in the ceremony in the picturesque canyon near the city Korostyshiv, about 107 kilometres west of the capital Kyiv. Trembling from the cold, but with a happy smile, they were getting into the water one by one, enduring the temperature of -20 C. 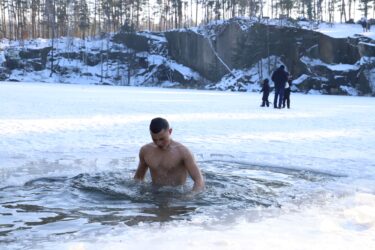 Denys Karasiov, 18, submerges into the water to celebrate Epiphany on Jan. 19, 2021. He is diving into the ice hole on the Canyon near the city Korostyshiv, Ukraine. Photo credit: Natalie Vasyliuk

Priests usually take part in the process of cutting through the ice, but because of the pandemic, ceremonies were officially banned to avoid gatherings. Nevertheless, people cut through the ice themselves for the Epiphany celebration.

Prior to Epiphany diving, it is important to get used to the cold temperature of water by taking cold showers at home. This preparation will reduce the risk of getting sick after swimming in the icy river.

Denys Karasiov has been taking part in the ritual since he first dipped into the water three years ago after spontaneously taking part in a ceremony with a friend.

“I enjoy how it takes your breath away when you submerge into the water,” Karasiov said. “Each time I do it, I feel like a new man.”

Ukrainians hold many superstitions about the holiday. They believe if it snows on Epiphany, the bigger the snowflakes are, the better the harvest farmers will have that year. In contrast, it is believed a cold sunny day on the holiday means a dry summer ahead.

For many people, Epiphany is a holiday, but for some, it is also a great opportunity to earn money. At the Korostyshiv Canyon, which was once a quarry, brothers Mykhailo and Pavlo Onishchenko made mulled wine and sold it for 40 hryvnias (C$1.79) per cup. 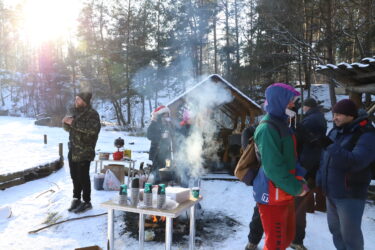 People gathering around the spot where cups of mulled wine are sold during the Epiphany dipping at the Canyon in Korostyshiv, Ukraine on Jan. 19. Photo credit: Natalie Vasyliuk

“I don’t see the reason why not to use this as an opportunity to earn some money,” said Pavlo while pouring red sour wine into a cauldron. Mixed with oranges, honey and cinnamon, the wine was heated in the cauldron and poured into the paper cups.

Delicious smells attracted many people who came to get a hot drink or stand by the fire to get warm after diving into the freezing water. Despite lockdown rules prohibiting social gatherings, everyone was celebrating.