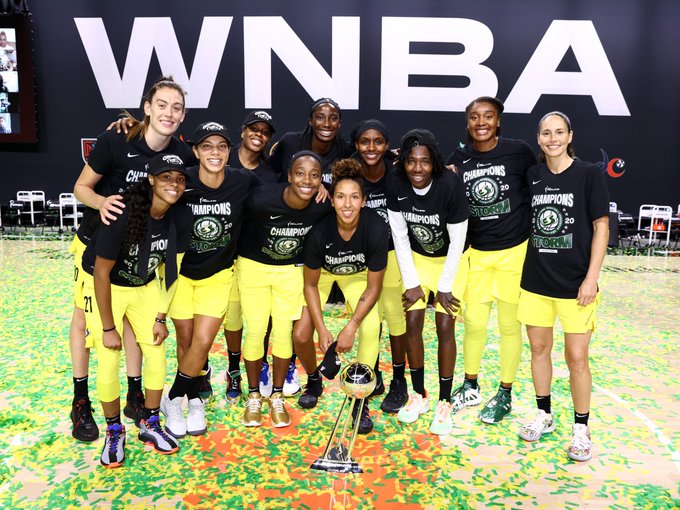 The Seattle Storm defeated the Las Vegas Aces 92-59 in Game 3 to complete the sweep of the Aces and to win its second championship in three years.

Star player Breanna Stewart was named Finals MVP for the second time in her young career. She averaged 28.8 points, 62.8 per cent from the field and 7.3 rebounds.

The power forward had the most to prove after missing the entire 2019 season due to a torn Achilles.

“Stewart had the most to gain after missing the 2019 season with a torn Achilles, ” said Boykin. “She came back and didn’t miss a beat, finished second in MVP, won comeback player of the year and now her second championship along with another finals MVP award which is now her second.”

“I’m so happy and excited for the whole storm organization, they’re an amazing group of players with an amazing ownership group, and they deserve all this success,” Bishop said.

She said she knew this season wasn’t going to be easy for the Storm especially being in the bubble.

“This season wouldn’t have been easy, living in the bubble, some people away from loved ones and family,” Bishop said. “But the way they handled themselves and handled business really speaks a lot about the kind of players they have and people involved in the organization.”

Seattle’s point guard Sue Bird also captured her fourth championship in her storied career at age 39 as she continues to count her accolades and go down as one of the greatest to play in the WNBA.

Huw Hopkins, a Sky Sports WNBA Analyst, said Bird has a high chance of becoming the greatest winner ever in women’s sports.

“Bird has been with the franchise for every championship, and joins a shortlist of players who have four rings,” Hopkins said. “Only one player in WNBA history, Rebbekah Brunson, has five rings, and if Bird comes back next season, she has a chance to join her, which would arguably make her the greatest champion in WNBA history.”

The Seattle Storm now have four championships in the team’s history, tying them with the Minnesota Lynx and Houston Comets for most championships by an organization in the WNBA’s history.