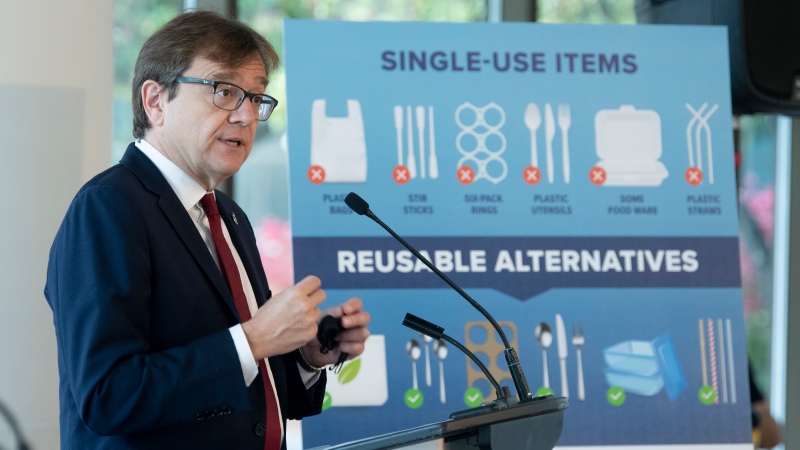 The federal government intends to have the new regulations in place and finalized by the end of 2021.

It will be enforced under the Canadian Environmental Protection Act, which will first require a scientific assessment of the problem.

The six plastic items included in the ban are:

“When a ban comes into effect, your local stores will be providing you with alternatives to these plastic products,” Wilkinson said Wednesday morning at the Canadian Museum of History in Gatineau, Que.

“This is a good step,” Sophia Robertson, a zero-waste speaker based in Toronto, said. “We have to push to make sure that we show we care.”

Emma Sponagle, an environmental advocate based in Kitchener, Ont., hopes this news will motivate Canadians to be more eco-cautious.

“Not only does banning single-use plastic reduce pollution, but it also reduces the demand for plastic production, which is a huge contributing factor to global climate change,” Sponagle told Humber News.

A study done by the Environmental Defence, a Canadian advocacy organization, showed that nearly 90 per cent of plastics end up in our lakes, parks, and oceans.

Once those plastic pieces are lost in the environment, they can kill or harm wildlife and pollute ecosystems.

They also found that less than 11 per cent of all plastics in Canada are recycled, which means the rest is out contaminating lands and oceans.

Dominique Banhegyi, an environmental activist based in Etobicoke, said the ban on single-use plastics was long overdue.

“Canada needs to re-establish itself as a global leader in green initiatives,” she said.

Although the government will be banning single-use plastics, such as checkout bags, straws, stir-sticks, cutlery, and takeout containers, not all products will be banned.

The federal government said some plastics will not be banned, such as those that serve a necessary purpose.

Other reasons not ban certain plastics include “a lack of affordable and readily available alternatives, a lack of major impact on the environment without legitimate recycling options, and the items in question serving an essential purpose,” CTV News reported.