NFL season sees too many injuries as week four approaches. 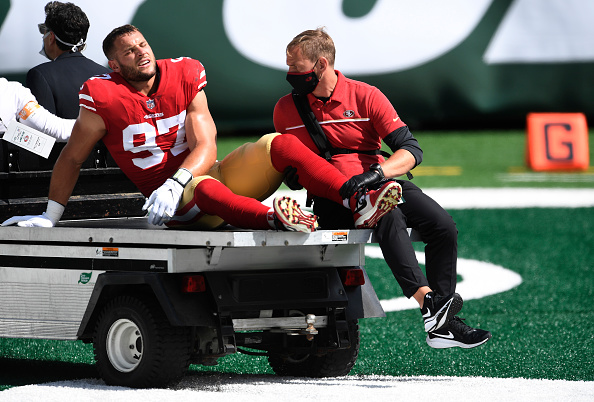 EAST RUTHERFORD, NEW JERSEY – SEPTEMBER 20: Nick Bosa #97 of the San Francisco 49ers is carted off the field after sustaining an injury during the first half against the New York Jets at MetLife Stadium on September 20, 2020 in East Rutherford, New Jersey. (Photo by Sarah Stier/Getty Images)

As the NFL approaches week four of the NFL campaign, the NFL has tried to keep players from an outbreak within the league but the it has not prevented injuries from occurring especially at a high rate as we approach week four.

Over the NFL season, the league has lost many players for an extended period time. This includes nearly 140 players that have been placed on injured reserve, a very high number for three weeks of football.

Former NFL player Dominique Curry said the mass amount of injuries has pointed the question if players were even ready for a season.

Notable players haven’t been immune to the injury bug either. New York Giants star running back Saquon Barkley and 49ers star defensive end Nick Bosa, both expect to miss an extended amount of time due to torn ACL’s.

The NFL is just not ready to acknowledge this may have been a cause of no preseason and a lack of preparation to the NFL season.

Desmond Cooper, another former NFL player, said there just needs to be a preseason.

NFL fan Cameron Simpson said he rather have the season cancelled if it means less injuries and better football.

“I’m obviously not a professional athlete but I’ve been around sports at a high level all my life and you always have to be ready to play, seems to me that many players aren’t ready,” Simpson said. “If theres any indication that players weren’t ready for this season especially, they should have just cancelled it and played next year, it’s always about money and never the players sometimes.”