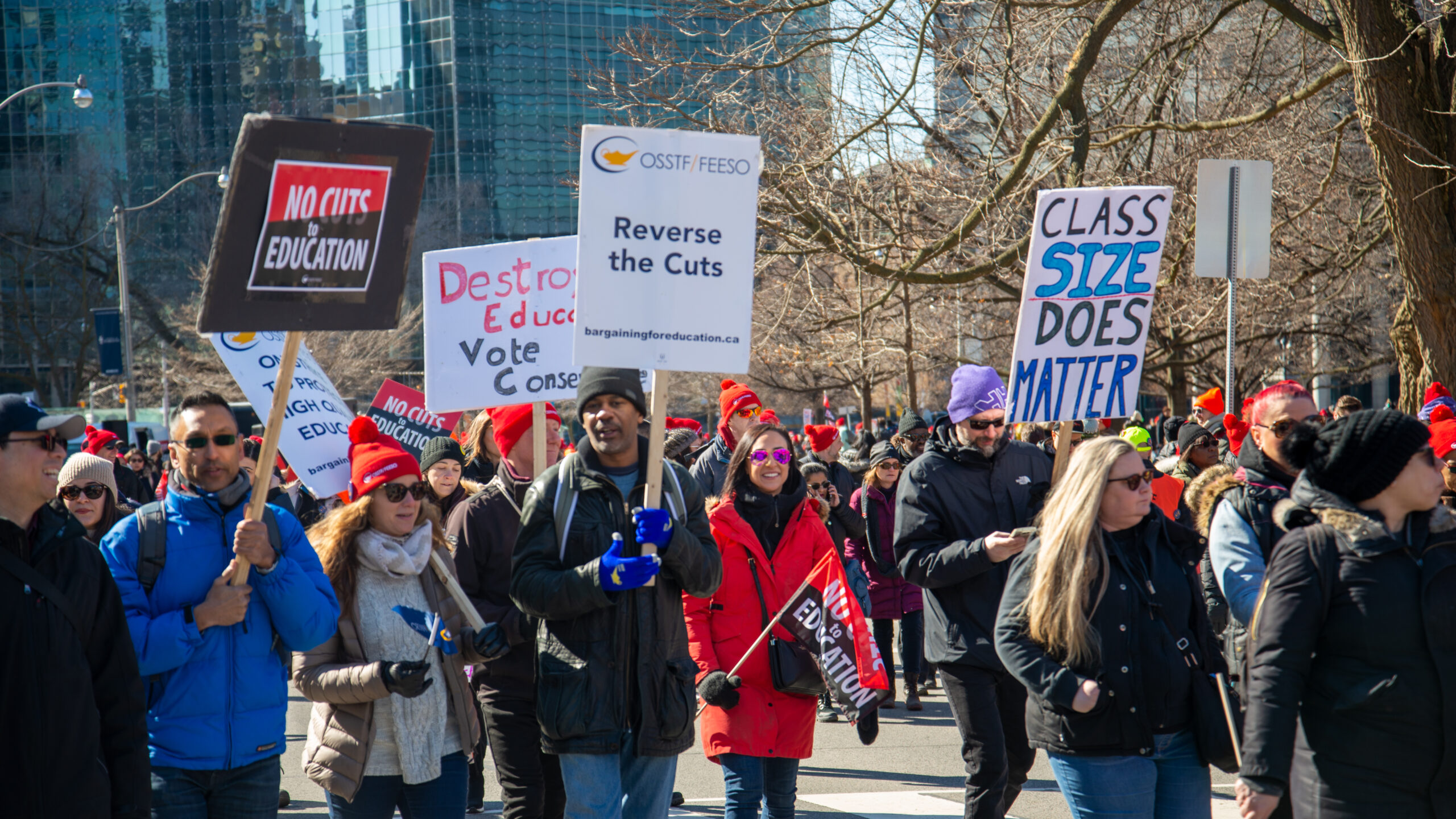 For the second time in less than a month, teachers hit the picket lines outside Queen’s Park to protest the province’s cuts to education.

The latest strike comes just two days after the Ontario government announced its plan to walk back its position on class size increases and mandatory e-learning courses.

Teachers from three out of the four major unions were outside the Ontario legislature building in downtown Toronto on Thursday protesting a lack of progress on wages, benefits and the sticking issue of classes sizes.

The latest protest comes even though the government announced on Tuesday its plan step back and freeze the average class sizes to 23 students, and make the formally mandatory e-learning courses, optional for students.

Teachers outside Queen Park echoed that the announcement from Education Minister Stephen Lecce did little to address all of the concerns facing teachers in the province.

Teacher Sarah Bumstead said that even though the announcement made by Lecce did address some of the concerns she’s had, she said it doesn’t mean much if those promises aren’t clear and in writing.

“There’s still nothing documented in writing and even what he has offered, does not necessarily equal what maybe it sounds like initially,” Bumstead said. “So the average of one to 23 does not incorporate classroom caps, it does not address cap sizes.”

High school teacher Emily Clair echoed that sentiment saying the announced rollback should have been offered to the teachers’ unions at the bargaining table rather than presented to the public.

Clair added that the concessions being presented by the provincial government isn’t exactly what teachers are looking for.

“It doesn’t represent exactly what we had asked for, which is that class sizes remain or the funding ratio remain at exactly the place it was before, which is 22 to one and they’ve offered 23 to one,” Clair said.

“We don’t want to have any increasing class sizes, because that’ll mean that teachers jobs will be lost,” Wright said.

In a statement released on Thursday, the Education Minister referred to the plan being proposed to the public as being “fair and reasonable” for teachers. Lecce added that the time had come for the unions to get to the negotiation table and sign off.

“I urge the unions to stop this disruptive escalation and return to the table to get a deal that is fair for parents, students, and educators,” Lecce said.

On the other end of the aisle, Harvey Bischof, the president of the Ontario Secondary School Teachers’ Federation, the union that represents high school teachers, called the actions by the education minister as part of the “chaos in the education system.”

Bischof adds that the proposed plan to rollback on certain cuts is a tool to paint the education minister as the public hero in the government’s negotiations with teachers.

“He goes part of the way back to restoring those things and he wants to paint himself as the hero,” Bischof said.

“In-fact, this chaos lies at this government’s feet,” he said.