Hawks sweep through the Nickel Belt 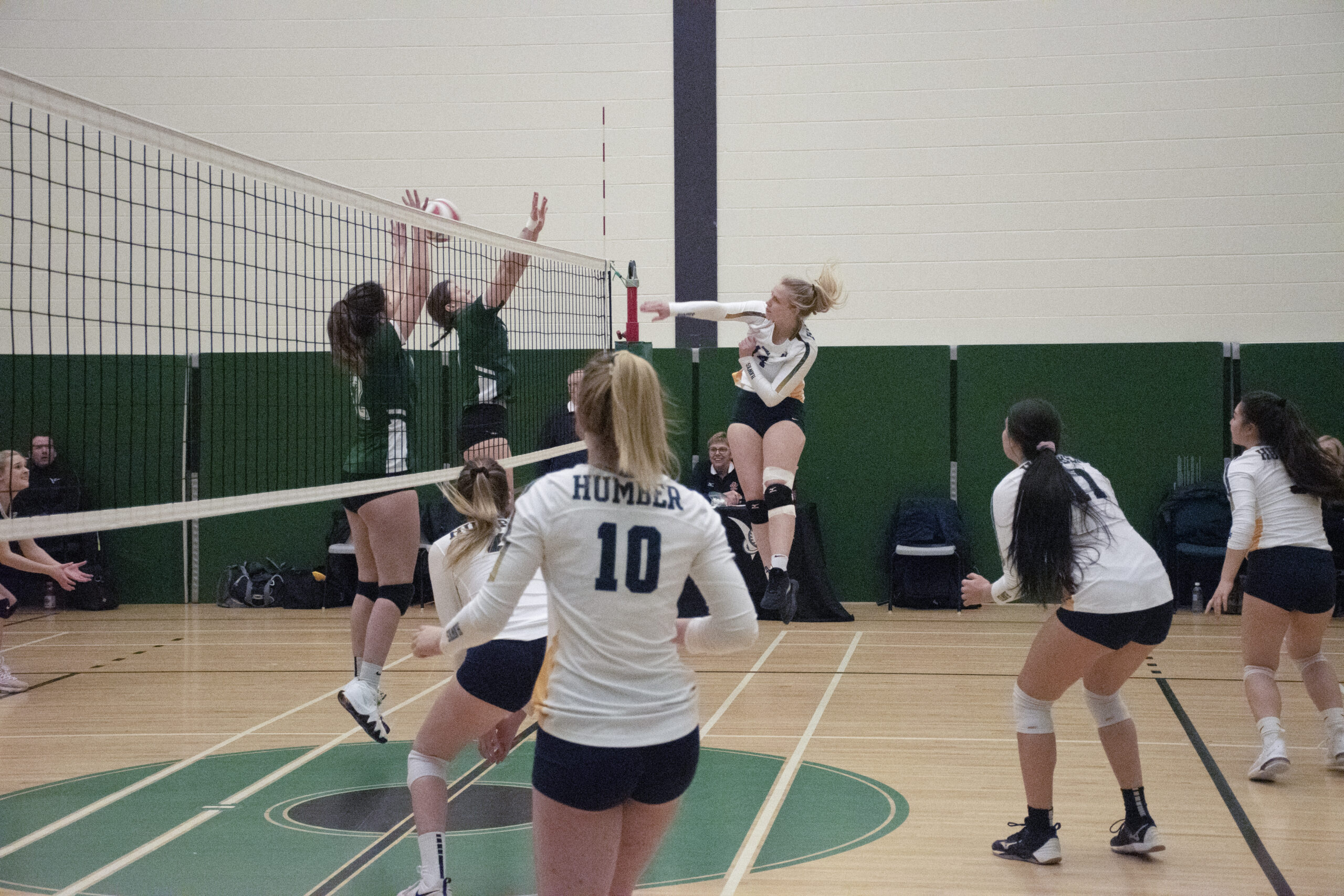 Humber’s varsity volleyball teams’ Nickel Belt Tour brought them closer to solidifying their positions as the provincials are right around the corner.

Both the men’s and women’s Humber Hawks volleyball teams won each of their matchups against the Boreal Vipers and the Cambrian Golden Shield on the weekend.

When asked about performing to the game plan, Hawks coaches were honest with their assessment.

“Yes, to the first set and the third set, no to the second,” said women’s assistant coach Mandi Doris. “We need to do more of us. We talk to the girls about our control, our energy, that’s what our focus is.”

The most impressive player Saturday for the women was Hawks Outside Hitter Hayley Henderson who scored eight of their points off eight kills. After the game, however, she relayed the same mentality when it comes to the second set.

“The first set we started off really strong,” Henderson said. “But the second set we were just kind of waiting around hoping that they would mess up … but we finished off strong so we were happy about that.”

On Sunday however the games were more tightly contested with the Cambrian Golden Shield’s taking the first set against the women and forcing the third set into overtime.

“We’ve had injuries and it’s kind of hard figuring things out on the court,” said Hawks outside hitter Hannah Petcoff. “But (it’s) learning experiences of when something is thrown at us that we weren’t really expecting.”

Despite the rough ending to the weekend, the women’s team still sits 13-3 on the season and will be looking to inflict damage during provincials at the end of the month.

The games never seemed far from their talons, which speaks to the depth of the Hawks’ bench.

Many of their bench players got the start for this weekend, sharing playing time as the playoffs loom and minutes will be hard to come by for some.

Players like Xavier Reid seized the opportunity. Being one of the most notable players on the weekend scoring seven kills, two aces and nine of their points for against the Boreal Vipers.

However, after the game, Reid felt it was a mixed bag. “We definitely had a little bit of fun, not as disciplined as we would have liked…a lot of errors but we had fun,” the Outside Hitter said. The long travel weekend was also a team building experience, bringing teammates closer together as every point scored or flubbed shot brought a loud reaction from the bench.

“You know it’s (a) hard four-hour bus ride,” said Hawks head coach Wayne Wilkins. “You can tell they have a lot of fun playing so they enjoy it and a lot of chemistry.”

At one point a Hawks’ serve was thrown into the air only to travel a couple of metres before hitting the ground, causing the bench to erupt in a chorus of laughter and players collapsing to the ground in hysteria.

“We just got a bunch of crazy guys this year,” said Hawks Middle Blocker Andrew Blakey. “There’s basically a celebration for everything. Everyone’s loud and everyone supports each other.”

Both the women’s and men’s team will have only two tune-up games left, against the Redeemer Royals and the St. Clair Saints this weekend before provincials start Feb. 27. The men will be trying to right the wrongs of seasons past as the Fanshawe Falcons have beaten them in back-to-back years in the finals.

The women will also be aiming to get back to their winning ways as last season was the first year they had didn’t win an OCAA medal since 2001-02.