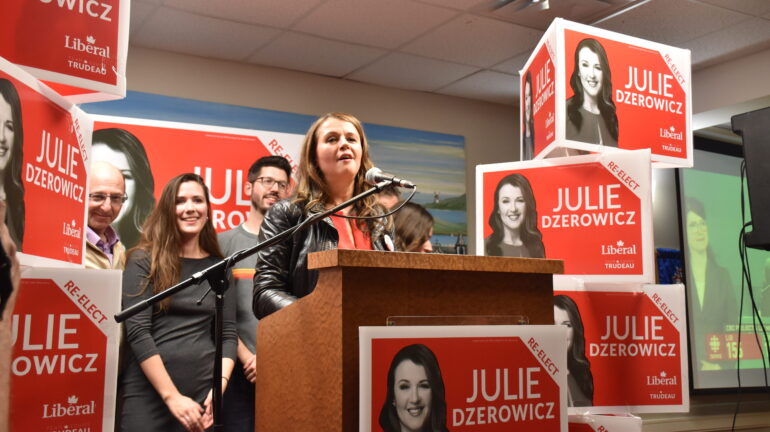 Cash gave an impassioned concession speech to his supporters, congratulating the other candidates ona hard-fought campaign.

“Notwithstanding the results tonight, we are on the right track,” Cash said about his hopes for the country going forward. “Canadians have said we need to fundamentally change the way we do things in Canada and we are part of that movement.”

Davenport is on the west-end of Toronto and has a population of 108,475 according to the 2016 census. In 2015 the National Register of Electors, which tracks people eligible to vote, said there were almost 71,000 in Davenport.

The 2006 census said that Davenport had the highest percentage of ethnic Portuguese in all the ridings across Canada at 27.4 per cent.

The list of candidates running for the riding are:

The riding has historically been a stronghold for the Liberal party, with a Liberal Member of Parliament representing them from 1962 until 2011 when New Democratic Party candidate Cash was victorious.

Cash is a former singer-songwriter who’s 2011 campaign was focused around then Liberal MP Mario Silva not being a “full-time MP”. He won with almost 54 per cent of the vote.

Davenport was one of the many swing ridings in the 2015 election, with Liberal candidate Dzerowicz, the first female MP for Davenport, defeating Cash in his re-election bid.

Dzerowicz was a first-time candidate who was part of the huge shift from NDP to Liberal candidates in 2015. The McGill graduate worked in banking before entering politics and was a senior staffer for former Provincial Cabinet Minister Gerry Phillips.

Polling website 388 Canada had this election race tight up until the day of the election, with Cash polling slightly ahead at 38.3 per cent compared to 36.4 per cent for Dzerowicz. A margin of error around eight per cent made the race too close to call.

The Toronto Star listed Davenport’s average household income at $64,764, lower than the rest of Toronto, making affordability one of the most important issues to voters.

Dzerowicz ran on a platform centred around the affordability, promotion of the arts and the environment. Her environmental concerns are longstanding, and she is the co-founder of an environmental charity called Project Neutral.

Cash’s campaign was focused on workers’ rights, particularly around the rights of freelancers, a cause he fought hard for when he was an MP. He was also adamant about raising taxes on corporations and environmental issues.