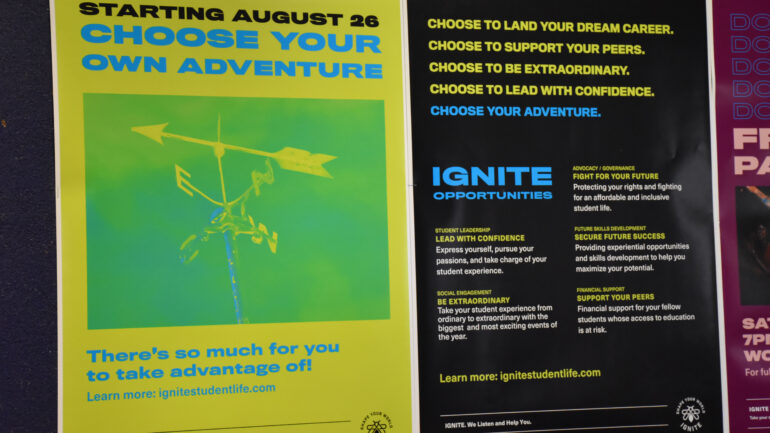 Posters across campus allude to some of the services that are funded by optional fees. (Patrick Simpson)

It appears the vast majority of Humber Students have chosen to pay optional student fees that fund extracurricular activities and services such as student government, clubs and emergency bursaries.

Early estimates indicate that more than three quarters of students have opted in to their “Enhanced Student Experience” fees, according to Humber College President Chris Whitaker.

“It’s still early on in the semester, but it seems that over 80 per cent of the students are opting into all the ancillary fees,” Whitaker said.

Students were given the right to opt out of certain fees back in January when the Ontario government announced the Student Choice Initiative.

Students were given until Sept. 16 to opt out of some of their fees totalling $55.95. If a student opted into all compulsory and enhanced student experience fees, their total contribution would be $525.84.

Not many organizations would be happy about a 20 per cent cut in revenue, but IGNITE  has found the bright side in the numbers.

“We got some preliminary numbers. We forecasted a 60-ish per cent opt in rate, and it has met slightly, maybe a little bit exceeded our expectations,” said Kristine Galvan, IGNITE’s leadership Initiatives coordinator.

At Humber, students could opt out by logging into their student account and selecting which optional fees to pay. Students were automatically opted in to fees and have to manually opt out by updating the page each semester. Students can only be opt out the tenth day of class.

The Enhanced Student Experience Fees page on MyHumber outlines the dollar amounts and funding allocation for the optional fees.

In addition to making some fees optional, the Ontario government reduced tuition 10 per cent for domestic students at all post-secondary institutions.

The OSAP cuts forced some students to question how they would fund their education with less support from the provincial government.

However, Jason Hunter, Humber’s vice-president of students and institutional planning, said enrolment increased by almost four per cent since the reduction was announced.

“I can tell you year over year, at least at this point, we’re up about 3.8 per cent,” he said. “We would expect that by Nov. 1, we’ll have a better sense of how many students have withdrawn but we’ll still be, I’d say, in a positive growth.”

“Domestically, we continue to have strong enrolment, and we’re probably up a couple of per cent over what we had anticipated,” Hunter said. 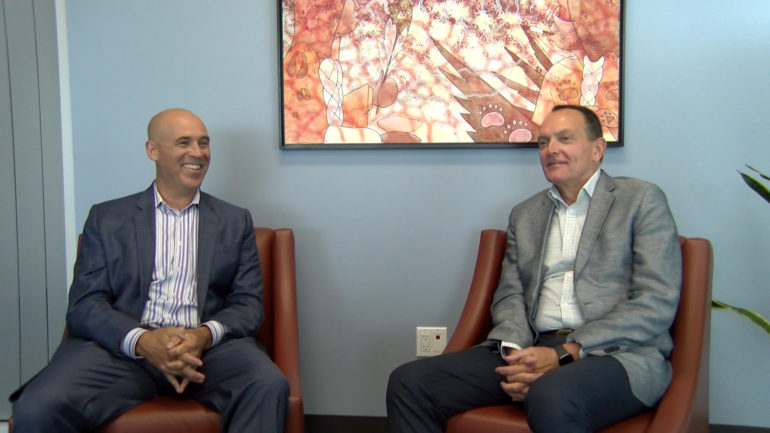 No cuts at Humber so far

Whitaker said Humber is continuing its commitment to programming.

“We’re maintaining our investments in our programs, so we haven’t made any cuts,” he said.

Whitaker said Humber is starting it’s first ever major fundraising campaign even though no cuts are being made.

Like many other institutions in Ontario, such as hospitals, it is time to enter campaign mode, he said.

“We’re calling it “Unlimited”, not because we’re going to raise unlimited money, but because we think that all of our graduates have unlimited possibilities with the education they receive at Humber,” Whitaker said. “It is an aspirational campaign and our goal is to raise $50 million.”

While Humber is preparing to campaign for funds, the college is supporting staff in finding ways to do more with less.

“We are encouraging staff and our managers to continue to look for opportunities to operate more efficiently, and to look for ways to pursue other revenue stream so we can supplement any of the reductions as a result of the loss of tuition revenue,” Whitaker said.

“We invest pretty significantly in things like work-study programs that provide students opportunities to work on campus while they’re studying,” he said.

“I think that really takes away some of the some of the financial challenges, as well as just makes it more convenient for people to be able to work and get some work experience, it’s going to help them when they when they enter their careers,” Hunter said.

Students received an email reminding them about the option to opt out of some student fees.

“Humber over the years has tried to provide a great number of supports and services for students who are in need,” he said. “That’s everything from emergency financial aid, to counselling and advice and different programs to support students.”.

Whitaker said that resources Humber can’t provide can be outsourced by the college.

“We’re here, as are IGNITE, in terms of trying to provide as much support as possible to the student population, and if we can’t provide them with everything we need, then we will try to make referrals to other sources outside of the institution, but we’re here to support our students, so they’re as successful as possible,”  he said.

“We know that everything in life impacts your ability to learn and be successful in your program. So it is important that we continue to find ways to support students,” Whitaker said.