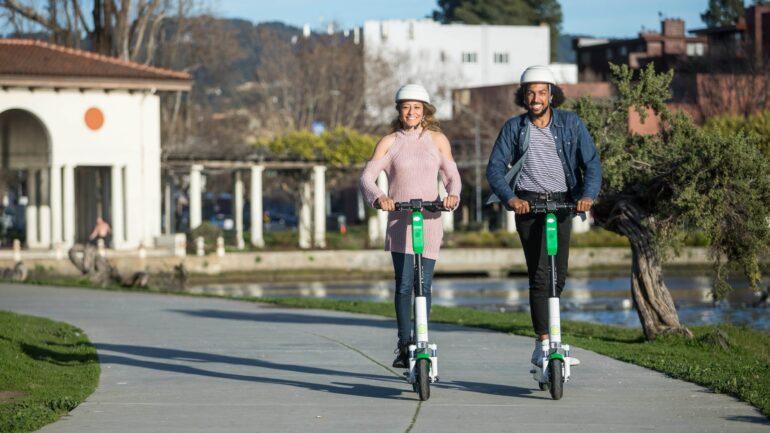 Electric scooters are one of the trendiest forms of micro-transportation, and they will soon be available across Canada. (Lime Scooter)

One of the world’s most popular electric scooter sharing services is expected to launch in Canada this month.

Bird Canada announced last week it will be launching its pilot project in Calgary and Edmonton.

The American scooter giant Bird Rides Inc. — valued at $2-billion — is operating in more than 120 cities across the United States and Europe.

According to Bird CEO Stewart Lyons, this success opened the door for him to begin negotiations to bring this technology to Canada.

“[Bird has] been pretty successful, pretty quick adoption, pretty strong response from customers, so it seems like something customers would want, so we assume Canadians would also want that, and there’s no reason for Canada to be far behind,” he said.

Scooter sharing is one of the world’s newest forms of transportation, but the question remains on whether it can be usable here.

Bird Canada will not be the first scooter sharing platform in Canada. Lime, another American scooter company, launched its pilot project in Waterloo last year.

Chris Schafer, senior director of Strategic Development for Lime, said that despite not being as densely populated, scooter sharing has potential to be a viable greener form of transportation, and people have stated scooters weaned them off less efficient modes of transportation.

“We did a survey in 2018 of our global ridership and folks indicated to us on their last trip that if not for Lime, 30 per cent would have taken a car, ride-share or taxi,” he said.

When it came down to choosing a city for Bird’s launch, Lyons said it was policy that decided where the first Bird scooters would land in Canada. Calgary and Edmonton were chosen over cities that are larger and more populous that could provide a larger sample size.

“They’re the first ones who were being more innovative on the regulatory process and certainly pushing for it faster…the Torontos of the world are a little farther behind,” he said.

Policy has also affected Lime. Their scooters are restricted to several trails and bike lanes in Waterloo.

Matthew Palm, a Human Geography postdoctoral fellow, said that he thinks that the slow policy progression comes from a fear of fast developing transportation technology.

“Electric scooters hit the streets at a time when cities were already experiencing blow-back over the rise of Uber and Lyft, and ride-hailing’s impact on cities.  I think the ride-hailing controversies have made cities more cautious about embracing other technologies like e-scooters,” he said.

However, geography could also pose a serious issue.

Lyons said he has seen Bird succeed in colder climates, such as Minneapolis, Denver, and Milwaukee, so it should be replicable in Calgary, Edmonton, or anywhere else in Canada.

He also believes Bird will be successful in cities, and in rural areas with pockets of density, particularly university campuses.

Electric scooters are environmentally friendly form of transit, but they can pose problems to urban centres.

Injuries are possible on scooters, since no training is required to use one. According to a study by Austin Public Health, 20 injuries occurred per 100,000 electric scooter trips.

Palm said safety is the biggest downfall to the potential prosperity of these scooters.

“The public is still learning how to safely use e-scooters in mixed traffic. The concern is both for scooter uses as well as pedestrians and cyclists,” he said.

Clutter was an issue for dock-less scooters as well. Reports of scooters obstructing sidewalks have persisted since the launch of the product.

Lyons said Bird Canada have learned from the mistakes made by their American counterparts.

Aside from the physical issues, there are social issues that come with these scooters.

“The social equity implications of these technologies, in particular, have slowed their adoption. E-scooter riders are portrayed as wealthy, young tech-works who thoughtlessly zip past old ladies on wheel chairs in over-priced cities. ” Palm said.

He also said that Bird had mandated that 20 percent of their scooters be placed in low-income communities, to serve areas that may not be the target market for tech companies.