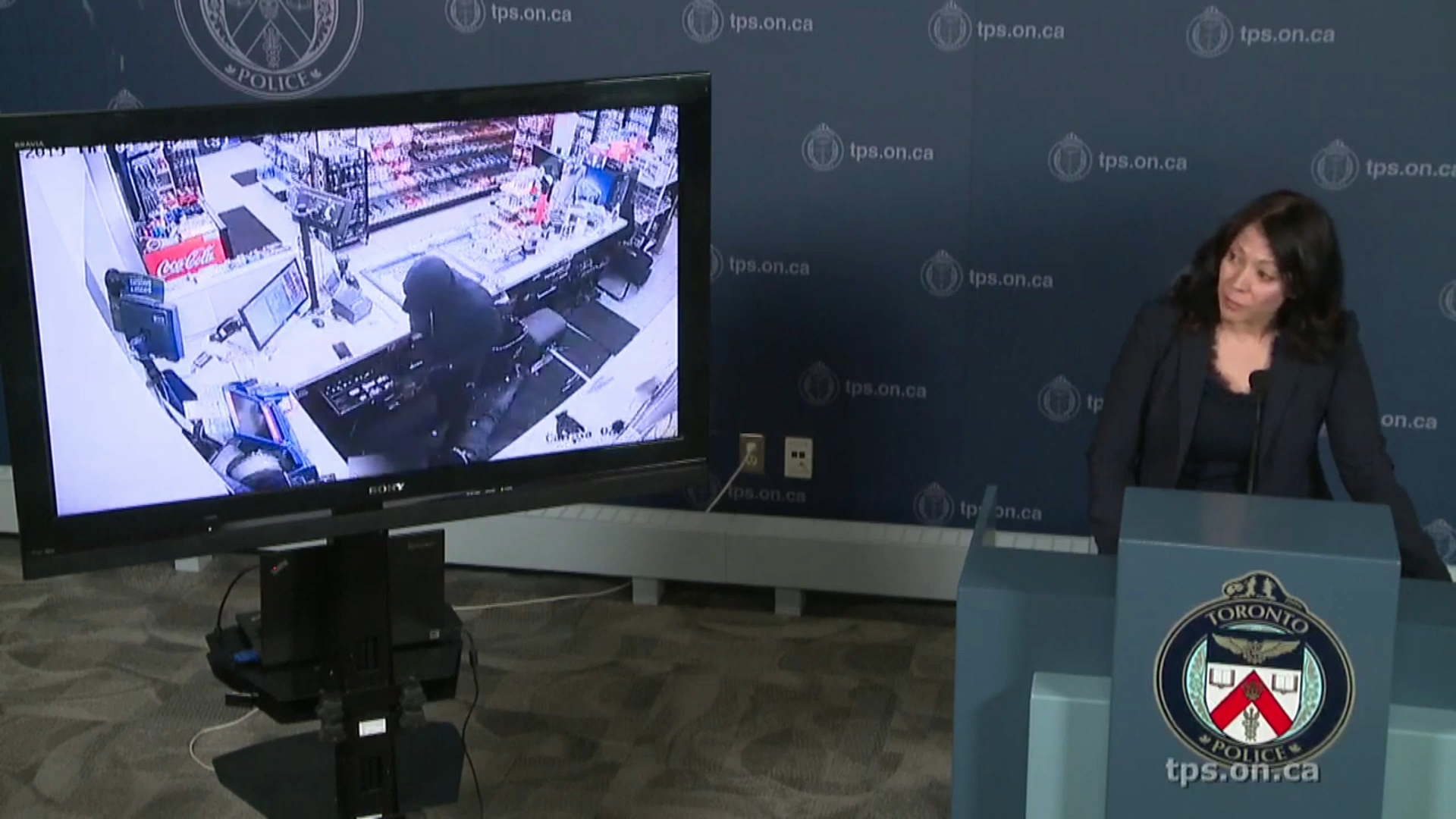 Toronto Hold Up Squad Insp. Lauren Pogue tells reporters during a news conference at Toronto Police Headquarters on Wednesday, June 26, 2019, that detectives are looking for a lone bandit in connection with a violent downtown gas station robbery. (Toronto Police Service)

Toronto Police are looking for the public’s help in identifying a male wanted for a violent robbery earlier this month that left a gas station attendant with a fractured skull and broken facial bones.

Hold Up Squad Insp. Lauren Pogue released video surveillance from the June 13 robbery during a Wednesday news conference of a male suspect that robbed a gas station in the Sherbourne and Front Streets area in downtown Toronto.

Pogue said the suspect jumped over the counter and confronted the gas station employee to open the cash register at knifepoint.

“You can see in the video that once the cash drawer is open, the employee backs away and you can see him put his hands up. And, you know, he is definitely being compliant,” Pogue said.

The video shows the suspect emptied the cash register and put the money in his pockets.

Pogue said the suspect then violently stomped on the victim’s head four times in an unprovoked attack,  before jumping the counter and exiting the gas station, leaving the victim unconscious on the floor.

The victim suffered serious injuries including a fractured skull, a fractured orbital bone, and cuts and bruises to his face.

Pogue characterized the victim as a hard-working man working the night shift, trying to put himself through school.

Pogue said the victim was found by another person who came into the gas station and was transported to hospital. He is currently recovering in a rehabilitation hospital and is expected to be there for several weeks.

“The level of violence seen in this particular robbery is extremely disturbing,” Pogue said.

Pogue describe the suspect as a black male approximately 5 feet 8 inches to 5 feet 10 inches in height, with a thin, muscular, and athletic build.

He was last seen wearing a dark coloured hoodie with a silver zipper up the front. He had on a dark ball cap, with the hood drawn up over the ball cap and pulled tightly around his face.

The suspect was wearing black Converse-style sneakers and black gloves.

Pogue said police are only looking at this individual for this particular robbery.