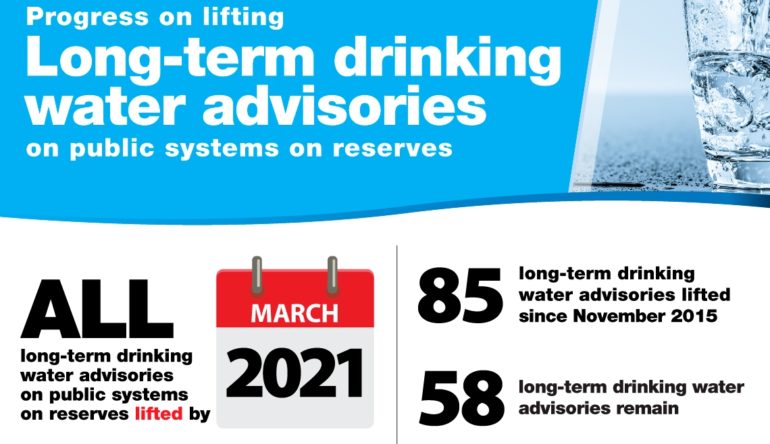 The Canadian government in partnership with Nibinamik First Nation in Northwest Ontario are working together to provide access to clean and safe drinking water.

The $6-million project will be used to design and construct a water treatment plant for the First Nation about 500 kilometres northwest of Thunder Bay. The new plant would eliminate the drinking water advisory that has affected the community of 360 since 2013.

Seamus O’Regan, the minister of Indigenous Services, said in a statement released May 13, that construction is set to begin in spring 2020 and is projected to be completed in spring 2021.

“I am pleased to partner with Chief (Johnny) Yellowhead and Nibinamik First Nation to announce upgrades and an expansion to water infrastructure that will help to eliminate a long-term drinking water advisory in the community and restore clean, reliable drinking water to residents,” O’Regan said in the statement.

The Canadian government plans to lift the long-term drinking water advisories in Nibinamik by March 2021, through the Investing in Canada Infrastructure Plan, which will see the government invest $180 billion in five priority streams, including social infrastructure, public transit, green infrastructure, trade and transportation infrastructure and rural and northern communities.

“This funding will help provide clean, safe drinking water to our community — something that we haven’t had for so many years now. What Nibinamik needs is a long-term, reliable solution to our infrastructure crisis,” Yellowhead said. 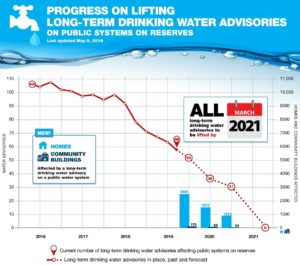 Since 2014, every federal budget has provided investment for water and water-related infrastructure on reserves.

According to Indigenous Services Canada (ISC), the number of long-term drinking water advisories has been reduced to 58 from 105, in part possible due to contributions from First Nations.

Water on reserves remains to be a critical and important issue for the First Nations and the Federal government.

“With this funding, Canada is finally signaling that it sees the need to provide more than a band-aid approach and that is a very positive step forward,” Yellowhead said.