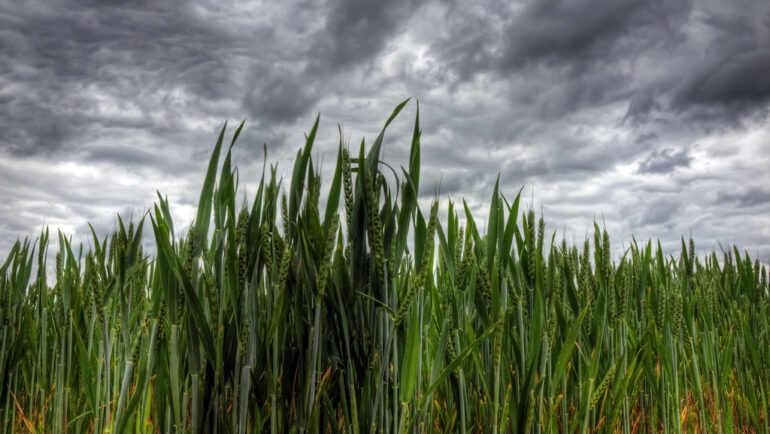 Wheat, soy and corn are the three major crops in Ontario that require an entire season to properly fully grow. (Neil Howard/Flickr)

Tractors are still in the shed and seed planting won’t go ahead until the frozen, wet soil warms up, said Keith Currie, president of the Ontario Federation of Agriculture.

Early May was the target for getting crop seeds planted in previous years, but consistent colder temperatures and heavy rainfall this spring have limited Ontario farmers’ efforts.

The Holland Marsh, a prime producer of Ontario agriculture, is one of the areas affected by the unseasonable weather. The marsh grows and sells an estimated $200 million worth of fresh produce annually.

“Mother nature isn’t cooperating,” said Avia Ekee, who owns one of the 125 farms on the 7,000 acre marsh with her husband, Bill.

Around early-May last year, Bill had fully-completed seeding the onions and carrots — right on schedule for the season.

He held off planting carrot and onion seeds until mid-May this year. Planting too early in wet soil could cause an expensive and irreversible problem and potentially ruin $40,000 to $50,000 worth of seeds, Bill said.

Rainfall amounts were significantly higher than average this spring in Southern Ontario, causing flooding and a delayed farming season. (Agriculture and Agri-Food Canada)

Planting seeds prematurely in cold soil can also cause disease to manifest in the growing crops. That would negatively affect the marsh’s contribution to the global food chain and Ontario’s food sovereignty, Avia said.

Timing is “extremely important” for planting crops in order to receive the highest yield and maintain the highest quality, said Dave Hooker, a professor of agriculture at the University of Guelph.

The three major crops in Ontario — wheat, soy and corn — can suffer the most severe consequences of a delayed start. They require an entire season to properly mature for market distribution, Hooker said.

But nothing is ever set in stone for the farming schedule, Avia said, as the forecast is unpredictable and climate change has noticeably shifted season start and end dates.

“We see how the climate shifts as farmers,” she said, noting it was necessary in previous years to have crops harvested by late October. Now the season “goes until late November into early December.”

Farmers on the Holland Marsh like Bill and Avia are mostly safe from certain inclement weather events. Large drainage systems underneath the marsh were installed — with funding from the federal and provincial governments — to combat heavy flooding.

An accumulation of two to three inches of rain can be completely drained in a few days through the system, Bill said.

With the weather becoming more unpredictable, #GreenInfrastructure is proving to be our best option in helping to mitigate the effects of climate change like floods by increasing the resiliency of our communities. Read on to see how #NatureDoesItBest! https://t.co/WZ3nfwQkOF

“Mental health issues have been increasing in farmers” as a result of growing risk from delayed starts, he said.

Those factors make it harder for farmers to meet “economic goals” in a shortened season, Hooker said. It can cause stress and an eventual ripple effect into industries that rely on farming efforts, such as grocery stores.

Currie said as May drags on, farmers are getting anxious playing the waiting game when they know they should be putting seeds in the ground.

Farmers are expected to put in longer work days to catch up during the shortened season, he said, which can also take a toll on their mental and physical health.

Not much can be done to fix the soil when it’s been “wet and cold — the only thing we can do is wait it out,” Currie said.