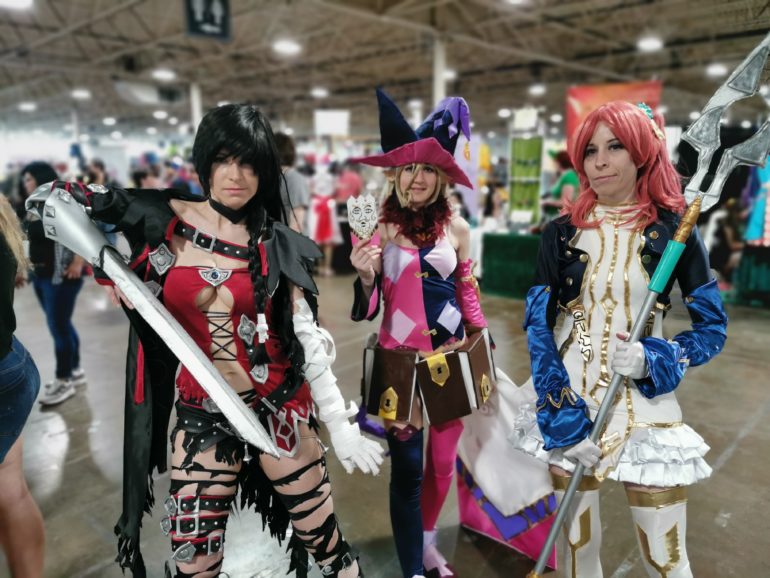 A group of three cosplayers dressed as iconic characters from the Tales Of Berseria Japanese video game pose at the Anime North 2019 Convention at the Toronto Congress Centre. (Rodrigo Diaz M.)

Anime North opened its doors this past weekend to all fans of anime, video games and Japanese culture at the Toronto Congress Centre in Etobicoke.

A wide variety of anime and video game-related activities took place from Friday to Sunday with events also held at the Delta Toronto Airport Hotel, the Sheraton Hotel, and the Radisson Hotel.

Irwin Tan, the convention chairman, said Anime North is the largest fan-run event in Canada with over 30,000 attendees last year.

“We celebrate anime and Japanese culture,” he said. “All the staff here have volunteered. Everyone is here because they have a passion for this and they love it.”

This year’s edition of Anime North had the most diverse and largest activity schedule in the history of the event, Tan said.

“We try to offer a wide range of activities so almost everyone has something they can enjoy in here,” Tan said.

One of the biggest attractions of the event was the chance to see all the guests dressed up as their favorite fictional characters, known as cosplay.

Justin, who cosplays as a vault dweller from the Fallout video game franchise, has attended the convention for 12 years.

“You can usually find things here that you can’t find anywhere else,” he said. “The community is awesome.”

For foodies, there was traditional Japanese food available for purchase at the Delta Hotel.

The convention first started over 20 years ago as a small event where anime fans could meet each other in person.

Martin Hsu, Media Relations staff from Anime North, has been coming to the convention since it first started in 1997.

“I think it’s a great chance for all fans, regardless of what series of genres they like, to get together,” he said.

Events in the first few years drew roughly 1,000 attendees, with no wifi or smartphones to help them organize it, Hsu said.

“People put up flyers with the locations and times of the activities so other attendees could go to them,” he said.

Since then, the internet has become a vital tool for anime fans, who can now research the shows they want to watch and organize events around them.

“Thanks to technology all anime fans have come closer together and it feels like the world is smaller now,” Hsu said. “One thing that has been constant though is the continuous love for anime.”

While Anime North might be the largest fan-run anime convention in Canada it is not the only event where anime-lovers can gather this summer.

On Aug. 22 Fan Expo will be held at the Metro Toronto Convention Centre and other conventions will take place all over Canada.