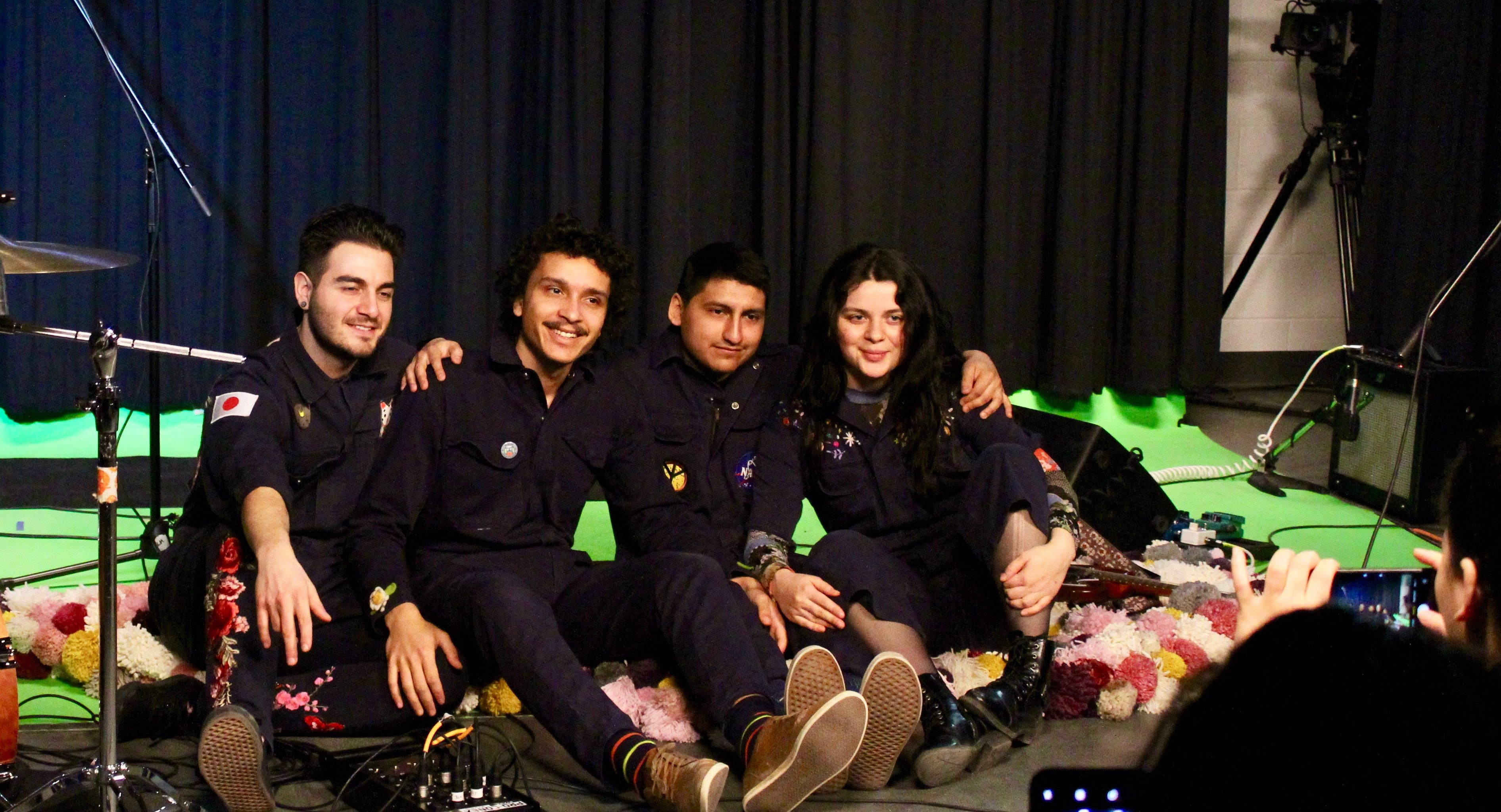 Music off Wooly’s 2018 album Time to Grow is available on Spotify and iTunes. (Alisha Mughal)

Amika Vie floated through the room with her hair black, wavy and tousled, falling across her face.

Her cheeks and lips red, her eyes blue — she seemed calm in the flurry surrounding her. Everyone was preparing for the band’s sound check in the L Building basement studio.

Humber North hosted Wooly, a four-member band from Whitby, Ont. on March 29 for a YouTube series that Radio Humber is producing on Canadian artists.

The band members consist of Vie, 23, singer and bassist for Wooly, Chris Caceres, 22, on guitar, Alex Tarsitano, 26, the drummer and Jonah Kissoon, 22, singer and guitarist.

Related story: Jane’s Party turning up the volume at Humber

“What’s the game plan?” Vie asked Kissoon when they pulled together for a quiet moment, her hand resting on his lower back, while Tarsitano got his drums set up.

“Play a song,” Kissoon said. And then she laughed, and then he laughed — and then they spoke soft words at each other. She kept her arm around him.

“We all started fairly young with different influences,” Tarsitano said later. “There was mostly family members for a lot of us, I think. But I think music for myself started to become more of a thing when I met this group of friends. And it really pushed me to want to just learn and become better at what we do.”

He started off playing the piano, but now he’s “into drums.”

The different influences explain the jumpsuits. Each member of Wooly is as multifaceted and varied as their sound — they have trouble defining their genre — and this uniqueness is reflected by their wardrobe. But because of this, they would show up on stage not looking like a band, like they belonged together.

“We all listen to really different music, and it shows itself in different ways,” Kissoon said.

Hence their dark blue jumpsuits with sewn-on embroidered patches that they always wear.

When the instruments and band members were set up where they should be — in a half circle, Tarsitano with his drums on the outer left, Kissoon with his ukulele from which hung an origami bird to Tarsitano’s left, Caceres and his guitar to Kissoon’s left, and then Vie with her microphone across from Tarsitano — the sound check commenced.

In all the throbbing sound, Vie stood in front of her mic waiting for her check with her hands in the pockets of her jumpsuit, drinking coffee periodically, swaying her head to the bits from the chorus of their song Pink Clouds that each instrument played. 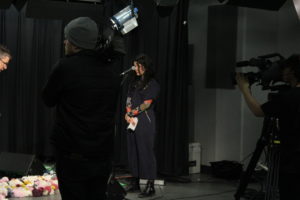 Amika Vie prepares to sing in the basement studio in L Building at Humber North campus. Band members wear the same jumpsuit, which they customize with embroidered emblems. (Alisha Mughal)

Vie stared at the ground dreamily, nodding to the soul of the song with a sleepy smile on her face as Kissoon played and sang, his voice like honey — she kept stealing glances at him as he strummed and sang, and he looked back at her.

When it was Caceres’ turn and he began plucking the electrifying tune of the chorus, it rippled through the room pealing like bells.

“My dad bought a guitar when I was in grade seven, and he never played it,” Caceres said. “And I was like, ‘okay, I’m gonna claim this.’

“I just started playing guitar like reading tabs online,” he said. “My first song I learned was ‘Hey There Delilah’. And then I just kept playing and then I met this guy,” he said, gesturing toward Kissoon. “And this guy honestly like pushed me so much ‘cause he was writing songs before anyone else I knew. That was new to me. It was all about covers when I was playing.”

“I think I got most into music probably around like grade eight, grade nine,” Kissoon said. He started playing the piano, like a lot of kids, like Tarsitano, around the age of four — music wasn’t yet his passion.

But in grade eight or grade nine — he couldn’t seem to remember which — Kissoon started writing songs. “Terrible, terrible songs,” he said.

Then he met Caceres. 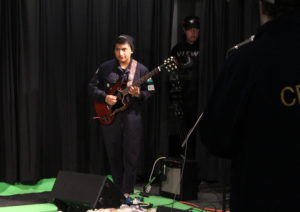 Chris Caceres, the guitarist for Wooly, during the band’s sound check on March 29. (Alisha Mughal)

“He and I had been playing guitar since — too long,” Kissoon said.

“Amika and I got close through a song-writing club that was just run out of our high school, and there were a lot of good songwriters there. It kind of got us into that mode of, like we were making a song a week sort of thing,” he said. “Most of them were pretty bad but every once in a while you get one and you’re like, ‘Yeah!’”

When Vie’s voice began its check, the steady hum of the voices of the Humber students working the cameras and lights silenced.

Vie’s voice was wide, like Kissoon’s, but hushed, soft like linen. It sustained itself, but it was not a soprano.

“My family, back to my grandmother, everybody just plays music,” Vie said.

“Our family is French Canadian, and our parties are just like a bunch of stomping your feet and singing out loud,” she said. “And my grandma was always on the piano playing and my dad plays piano and accompanies my mom who sings. My brothers sing.

“Everybody does something musical,” Vie said. “It’s a very artistic house. If I didn’t play music, it’d be weird. I don’t even know why I started — I guess just because I was around that. Like, I started singing when I was three. But songwriting happened when I realized I couldn’t accompany myself because I didn’t know how to play instruments.”

She started by going up to a piano, pressing keys, and certain keys would sound nice together and so she would write lyrics to the nice sounds she made.

“It worked,” she said with a laugh.

When Wooly played, they sounded exactly as they did online.

Before they became Wooly, it was just Kissoon and Vie. They went on an East Coast tour with a few of their other friends. When they got back to Whitby, they realized they wanted a band.

“We really like that bigger sound,” Vie said. “We love mixing a bunch of instruments together, [it] just like creates a more impactful sound.”

They asked Caceres to join their band. 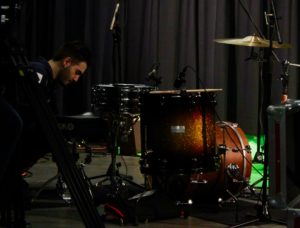 Alex Tarsitano, the drummer for Wooly, sets up the instruments ahead of the band’s sound check on March 29. (Alisha Mughal)

“Chris just played in his room,” Vie said incredulously. He was a great guitarist — why didn’t he play with them, Kissoon and Vie wondered.

“Do you wanna be part of our band?” they asked him.

Tarsitano played in a band with Kissoon, and that’s how they met. They started taking lessons together, practiced a lot.

“If you play something for four years straight you get decent at it, I hope,” Tarsitano said.

Wooly is not yet signed to a record label.

Representation by a label is not something they’re actively seeking at the moment, Kissoon said. But they understand its obvious benefits.

Though being independent means freedom, without a label they realize they don’t have “reach,” Vie said.

“We’re not marketing experts or distribution experts,” she said. “We do the best we can with the skills we have.”

Each member puts in an enormous amount of work. Caceres edits their videos, they work on the audio together. Tarsitano got them their jumpsuits.

And they all work together to write their songs — the lyrics and the music. One band member shows up with a beat or a riff, Kissoon said, and they grow from that.

“The vast majority of our songs are just things that we went into a basement and someone had an idea that they liked,” Kissoon said.

“Mostly, the music” comes first for Kissoon. A lot of the time he will freestyle “nonsense.”

She used to write poetry, and now the lyrics come to her before the music. Unlike her bandmates, Vie doesn’t freestyle. She likes to sit and write and listen, in a meandering way. She tells her bandmates to give her until the next band practice to perfect her words and music.

Though they all have a different writing style, their relationship as friends cements them together, Tarsitano said. Their personalities complement each other generally.

“Our writing styles kinda just conform and it just feels natural when we’re in it. It’s very rare that we come up to a problem,” he said.

“When we write songs, we’ll know if we’re gonna like them within like the first hour. We’ve had a lot of songs where we’ve written like a full song and we’re like, ‘this sucks,’” Kissoon said. 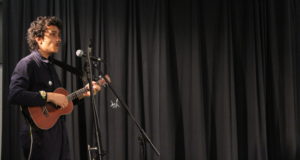 But they won’t abandon a song just because it doesn’t conform to an assigned genre, Vie said. Whatever Wooly produces, will be a Wooly song.

“It’s hard to tie yourself to one specific genre,” Tarsitano said.

They, viscerally, crucially, are always changing — whatever they listen to or even play changes, Caceres said.

But at the end of the day, Tarsitano hopes, “You’ll always know it’s us.”

When they played Pink Clouds through for the camera in the basement of L building, they passed around glances like a note in grade school — as though smiling at a shared secret.

But when Kissoon and Vie looked at each other, it was different. Vie later said she looked at him for three reasons: because he was nice to look at, to see if he was signaling to her that she missed a beat, or if something was off in all their playing.

“Being sustainable off of music would be nice,” Vie said earlier that day, and Kissoon and Tarsitano and Caceres nodded.

“[We] don’t need to be some [band] like Coldplay. I’d actually prefer to be a Tokyo Police Club-level of famous — ‘cause you’re under the radar enough to still live a pretty normal life,” she said. “Like, people still show up to your shows and you can make a career out of it.”

Vie does not mind the idea of living in a tiny house. She just wants to be able to play music on stage with her friends.

One Response to Wooly’s sound celebrates love and musical independence