One dead, one injured in a five-alarm downtown fire 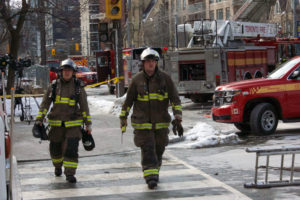 Firefighters leaving the scene after the five-alarm fire at 160 Bathurst St. was extinguished. (Kateryna Horina)

One person is dead and one is seriously injured following a five-alarm residential fire in Toronto’s downtown core on Monday.

Capt. Adrian Ratushniak of Toronto Fire said firefighters arrived just before 5:30 AM at a residential building at 160 Bathurst St. near Richmond after reports of a fire in the basement.

As the crews arrived, they found smoke and visible flames. Initial reports said that there were two occupants in the building and crews searched to find and rescue people. Both victims were rushed to hospital, where one of them later died. The second person is suffering from serious but non-life-threatening injuries.

People from the nearby buildings were also evacuated. Toronto Police asked people to avoid staying in the area because of the heavy smoke.

I was evacuated by a fire alarm and the smell of smoke from the building next to mine at Richmond and Bathurst.

My neighbour took this photo of the brave and selfless @Toronto_Fire

Capt. Ratushniak said the cause of the fire is unknown and the investigation continues.

“Because of the nature of the circumstances of the fire being a high dollar loss and as well as the fact that there had been a fatality and an injury, the Fire Marshal’s office will be lead in conducting the investigation along with our fire investigators,” he said.

Initially, the fire was reported as three-alarm but quickly escalated to five-alarm.

“The fire escalated basically evolving from the lower area of the property and traveling up into the walls and into the roofline,” Capt. Ratushniak said.

Ratushniak said 21 fire trucks and 80 firefighters were brought to the scene, partially because it’s so cold today that they’re trying to rotate crews. The cold was also a reason why the fire was difficult. 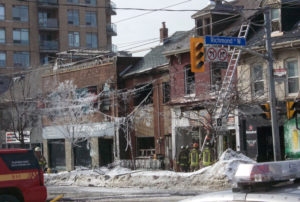 The affected area of the five-alarm fire that occurred on March 4, 2019 at Bathurst and Richmond streets. (Kateryna Horina)

“We have to be careful because when you’re putting a lot of water down in the area of the building it naturally comes out onto the street and onto the sidewalk, so it becomes slippery,” he said.

Thank you to Toronto’s countless courageous first responders keeping us safe this morning on Bathurst. It’s always frightening to wake up to a fire alarm when your building smells like smoke.

Also, thank you to @Jimmyscoffee for taking me in during the evacuation. pic.twitter.com/cU8CdYHzU8

TTC and Toronto Hydro were called to the area to de-energize all the nearby wires.

Bathurst St. was closed between Richmond and Queen streets but was reopened at noon.