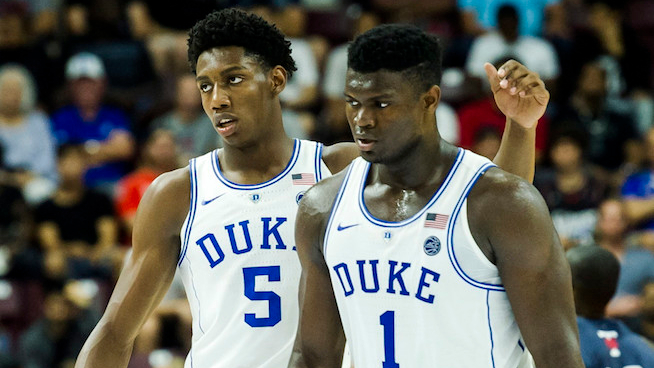 Some of the best college basketball teams in the world will be battling each other starting Wednesday to begin the annual tournament known as March Madness.

The 81st NCAA March Madness tournament will include over 60 teams from the US with one team being named victorious in the championship game on April 8.

“In the NBA, you have a decent chance of knowing what the matchups are and what they are going to be. The NCAA tournament is so random, and the unpredictability of a number one or two seed being knocked out at any point it makes it interesting,” said Jay Sarkar, who writes for the website The Wolverine Lounge.

Teams are seeded 1-16 based on the games they’ve played before the tournament in their own conferences. The number one seeds this year include Duke, Gonzaga, Virginia and North Carolina. While the second seeded teams are Michigan State, Michigan, Tennessee and Kentucky.

“Insane moments and crazy upsets will happen, there’s no doubt about that, it happens every year. A Duke and Carolina or Kentucky final would be legendary,” said WTKR-TV, Virginia sports director Adam Winkler. 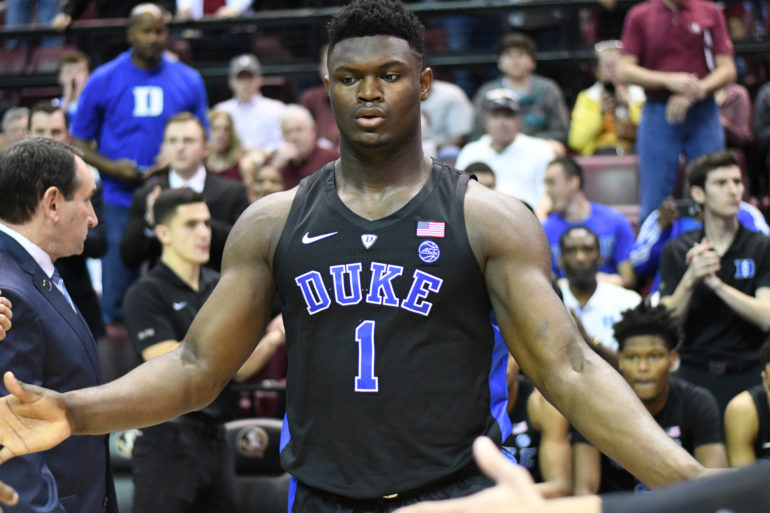 There will be plenty of eyes on projected first overall pick in the upcoming NBA Draft, Zion Williamson, to see if the Duke forward can continue to drive up his draft stock with his play in the tournament.

“If Zion can play at least five games on national television, it would really help the sport,” said Winkler.

Toronto-native RJ Barrett, who is expected to be picked within the top three selections of the NBA Draft, plays small-forward for the Blue Devils, alongside Williamson.

“Duke is as talented as a team I’ve seen in the 15 years I’ve been in this business. They are phenomenal. Zion is so big and so quick, and the Canadian R.J. Barrett is such a smooth player and they both make for a really fun duo to watch,” said Winkler.

According to ESPN, over 40% of people who have filled out a bracket picked Duke to win the National Championship.

“Their offense is actually incredibly simple, spacing out the floor, but when you have two players like Zion and Barrett who are tough to guard, it’s a matchup nightmare for other teams,” said Sarkar.

Other than Williamson and Barrett, there are plenty of NCAA stars in this tournament who will be looking to make their name in the NBA someday soon. 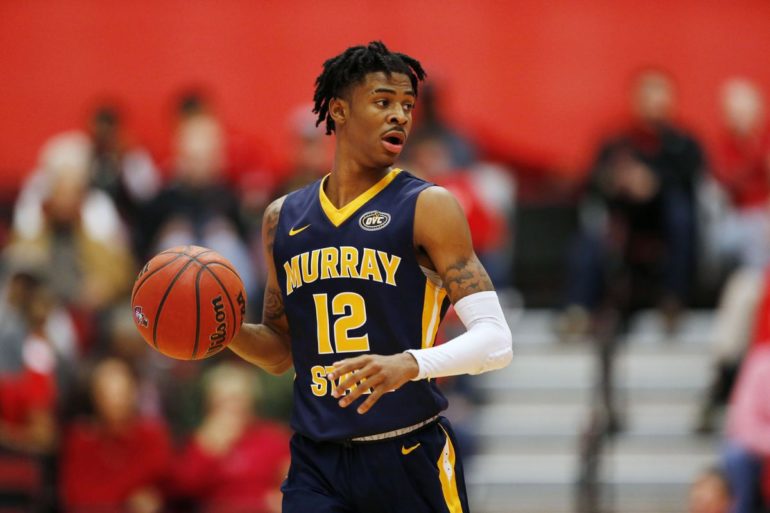 “Ja Morant from Murray State is a star and could play just one game, or more than one depending on if he could lead his roster to a few wins,” said Winkler.

Morant is a guard for the twelfth-seed Murray State Racers, shooting over 50 per cent and averaging just under 25 points per game.

“Ignas Brazdeikis, who’s actually a Canadian boy, has a big chance to grow his name in this tournament and will have a huge role to fill for Michigan,” said Sarkar.

Brazdeikis was born in Lithuania before settling in Oakville, Ontario. He’s on the second-seeded Wolverines roster playing forward, averaging just over 15 points per game.

“Coby White in North Carolina is a fantastic player. He hasn’t gotten much of the attention because of the stars in Duke (Williamson and Barrett) overshadowing him, but he is the real deal. If people need a reason to watch this kid, he’s broken plenty of Michael Jordan’s records from when he used to play at UNC,” said Winkler.

This college season, White passed Jordan’s North Carolina record of 460 points by a freshman. White is a guard for the number one seed Tar Heels averaging over 16 points per game. 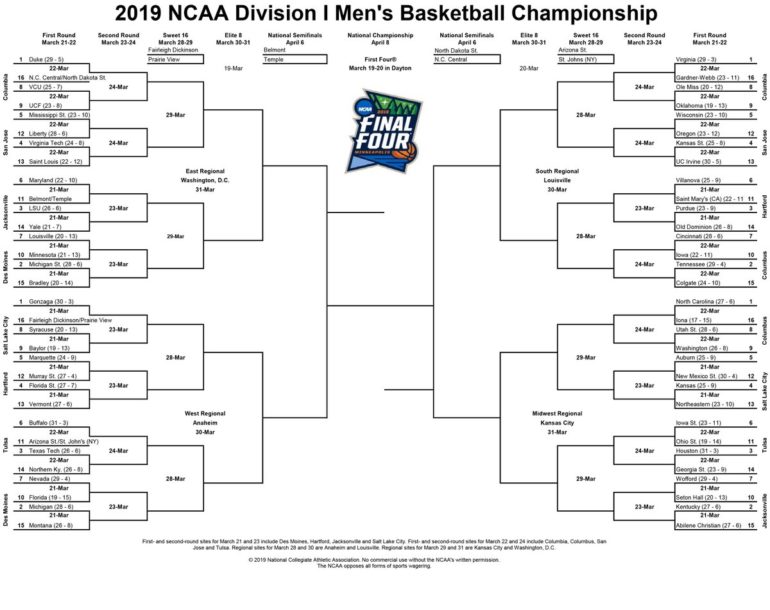 Many people’s favourite part about the tournament is the bracket. College basketball fans from all over the world try and guess every single game correctly, to win cash prizes over $100,000 offered on various betting websites. However, the odds aren’t in anyone’s favour with a 1 in 9.2 quintillion chance to get the perfect bracket.

“I’m a stat-rat. I look at the trends and look at the double-digit seeded teams and especially look for trends with them. Pay attention to conference RPI to see the best teams in each conference and which are the tougher teams. Historical trends are important too, to see which teams and seeds have had success in the past,” said Winkler.

Warren Buffett is also offering $1 million a year for life to a person who goes through the bracket perfectly through the round of 16. The highest recorded number of correctly picked games to start the tournament was 37 in 2017. 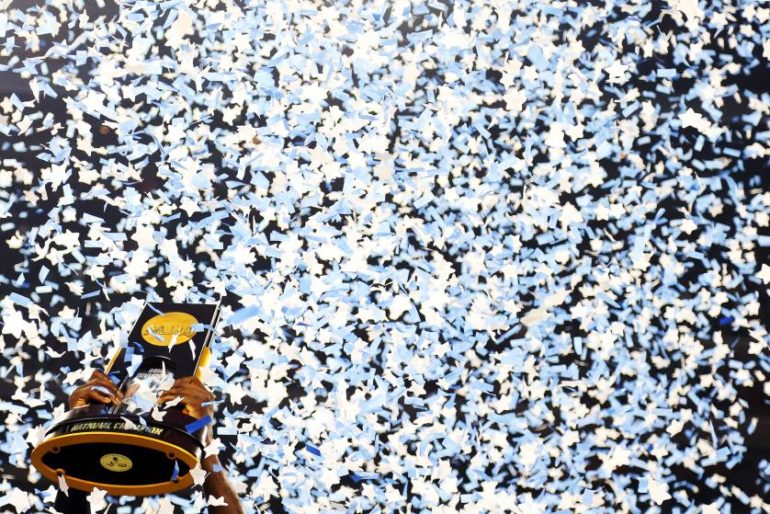 The Villanova Wildcats have won two championships in the last three years, including last years win over Michigan. (flickr/karencyars)

“You need to have at least one double-digit seed team make the sweet 16, because it happens every year. Look at the teams who are coming into the tournament hot. Find a team you like and stick with them,” said Sarkar.

Upsets will happen every year, and they are difficult to predict. Last year, the University of Maryland Baltimore County (sixteenth seed) beat Virginia (first seed), which at the time, busted any perfect bracket there was left. It was the first time a sixteenth seed beat a number one seed with sixteenth seeds being 0-135 before the game. Now, the record is 1-136 (0.74 per cent).

“A few upsets I have are Northeastern over Kansas, I just don’t think Kansas will be that good this year. And Old Dominion over Purdue. Old Dominion has two seven-footers on that team, so they will be fun to watch,” said Winkler.

“I have a few upsets with Murray State over Marquette and New Mexico State over Auburn. My biggest one is Wolford over Kentucky in the second round. I just think the Terriers play a good brand of basketball,” said Sarkar.

According to ESPN, 14 per cent of March Madness participants have North Carolina victorious.

“I’m picking North Carolina to win it. They are healthy and incredibly talented. When Roy Williams (head coach of UNC) is a number one seed, which he is this year, the minimum UNC has made it to is the elite eight. So, there’s not much worry about them being bounced out early,” said Winkler.

Duke’s Zion Williamson had an injury in February when his foot exploded through his Nike shoe, which caused him to missed six games in what was classified as a mild knee sprain.

“I do have Duke over North Carolina in the final, it’s hard to not give Duke the championship with all of the talent they have,” said Sarkar.