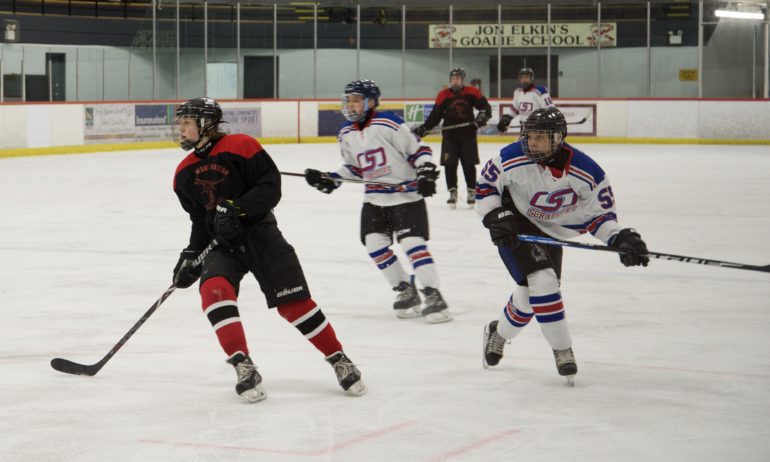 The Moose Cree Scrappers and the Six Nations Blackhawks (Delaware Nation) face off at Iceland Arena in Mississauga on March 12 as part of the 48th annual Little NHL. (Caitrin Hodson)

The warm sunshine melted the snow on the pavement as a little girl lugged her heavy hockey bag through the Iceland arena parking lot with a huge smile on her face.

Last week was March Break in Ontario, and more than 2,500 children, aged five to 17, from First Nations all over the province, were in Mississauga to play hockey.

With a record 229 teams participating in the 48th annual Little Native Hockey League, the energy at the tournament was palpable.

James McGregor, a former Chief of Whitefish River First Nation and a founding father of Little NHL, remembered the league’s first tournament in Dec. 1971, and can hardly believe how much it’s grown from the 17 teams and 200 players it started with.

He said the idea of starting a tournament for young people in their communities was always on his mind, even as a kid when the only league in his First Nations community was for men. 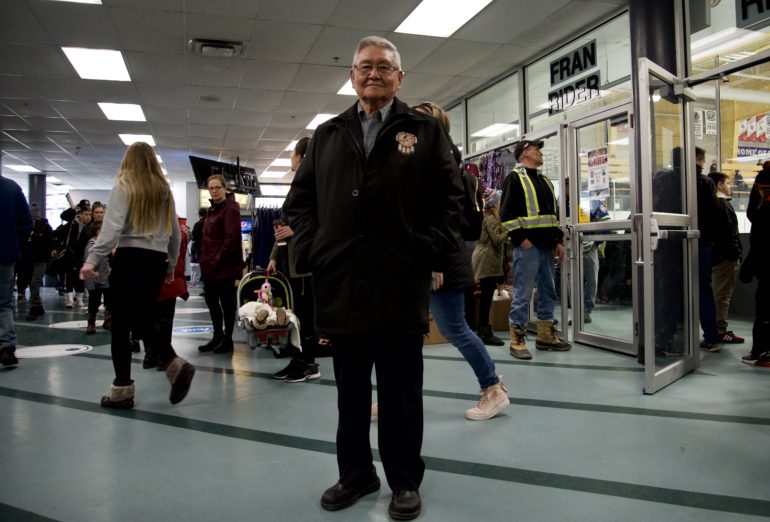 James McGregor, former Chief of Whitefish River First Nation and founding father of Little NHL, made the trip from Birch Island to watch players from First Nations all over the province compete. (Caitrin Hodson)

McGregor, along with Norman Debassige, James Debassige, Earl Abotossaway and Rev. Len Self, who have all since passed away, founded Little NHL to give First Nations youth the chance to play and compete in hockey.

Ted Nolan, former NHL player and former coach of the Buffalo Sabres, was 13-years-old when he played in the league’s inaugural tournament.

Though Nolan played hockey prior to Little NHL, in his hometown of Garden River and in a Sault Ste. Marie house-league, making the competitive leagues was near impossible for a young First Nations hockey player, he said.

“We couldn’t make the triple-A teams or double A teams at the time, so that’s when they formed this tournament,” Nolan said.

The competitive teams outside of their communities were tight networks and they were outsiders, Nolan said.

But Little NHL gave them the chance to experience what other kids got to experience, playing hockey and staying at a hotel for the weekend, Nolan said.

And it was a place free of prejudice, racism and name calling, Nolan said. A place where different communities could gather and form lifelong friendships.

“I always refer back to this tournament,” he said. “To me, it goes beyond playing the game. It’s almost like a Pow Wow on skates. It’s a time for us to celebrate our culture together.”

A celebration that has become a family tradition for many, including Nolan.

He and his wife Sandra watched their sons, Jordan and Brandon, play in the tournament before they too went off to the NHL. 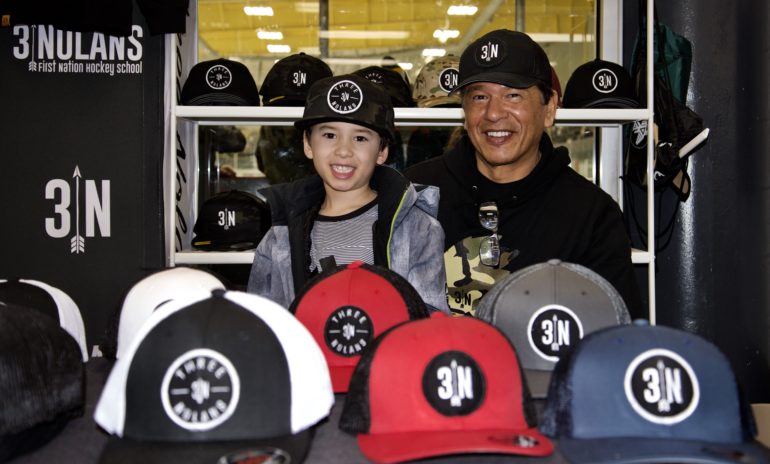 Hunter Nolan, 6, and his grandfather, former NHL player and coach, Ted Nolan at the Little NHL tournament on Mar. 12. They are sitting at the booth for the family’s clothing company 3 Nolans, which contributes a portion of sales to The Ted Nolan Foundation. The foundation supports First Nations women in achieving their educational goals through the Rose Nolan Scholarship, named after Ted’s mother. (Caitrin Hodson)

She remembers watching her grandsons play too and laughed, as she recalled with sentiment, her late husband and the cowbell he would bring to the games, to loudly cheer them on.

Peltier went on to win a Memorial Cup in 1981 with the Cornwall Royals and received 3 CCAA All-Canadian awards during his college hockey career. 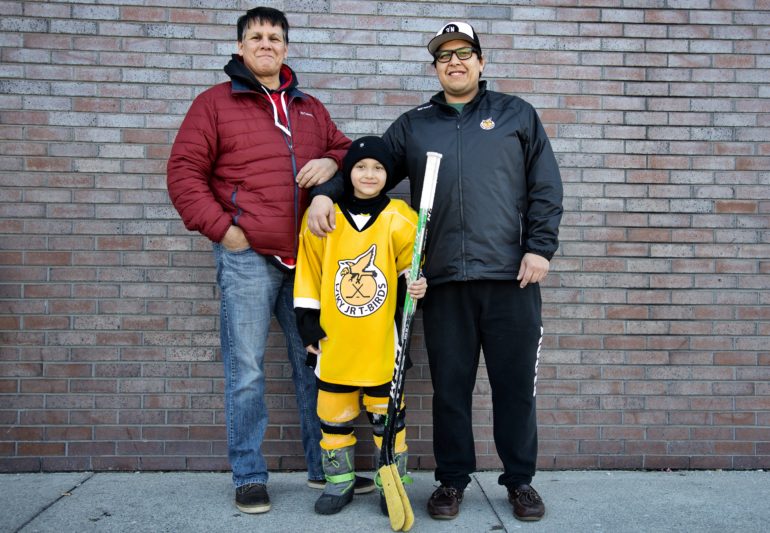 Gerard Peltier (left), his grandson Koda Peltier and his son Jesse Peltier, outside of the Iceland Arena where Koda’s team the Wiky Jr T-Birds won their afternoon game on March 12. (Caitrin Hodson)

Robin Debassige, whose grandfather Norman Debassige, was one of the tournament’s founders, also sat in the stands with her grandmother, her sister and her niece.

Her grandmother, Elizabeth Debassige, epitomized the strength of the tournament’s tradition, as she sat on the bleachers at 98-years-old watching the game intently from underneath a toque and a blanket.

Her three-year-old great-granddaughter and Robin’s niece, Mikayla, did the same, hands and nose pressed against the glass.

“Year after year, the new generation takes over,” McGregor said. “It’s amazing the support we get from our own people. Just look around us.”

And as much as Little NHL is about hockey, it’s about community, family and culture. Something that is evident from the generations of families who continue to travel to the tournament every year.

“That’s what I’m teaching my boys,” Nolan said. “Don’t forget where you came from.”