Women knit together to help the homeless 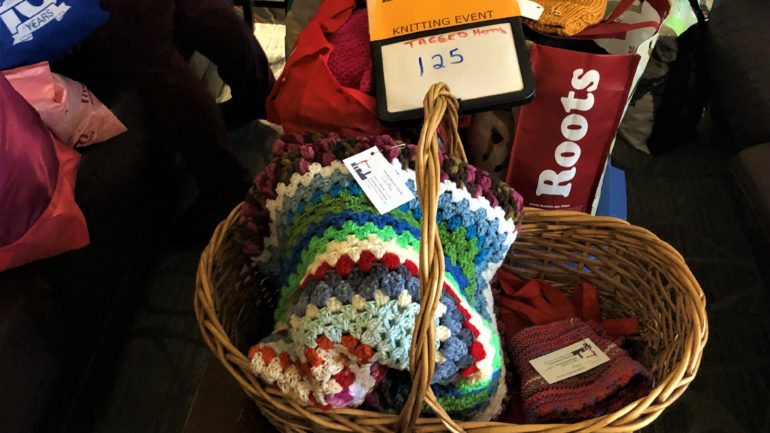 Volunteers gathered at downtown Toronto’s Imperial Pub and knitted 125 items, within a day, to be donated to the homeless. (Su Kustric)

Sunny Hope is a broker of sorts, linking warm-hearted knitters of hats and scarves with homeless people living in the freezing cold.

“I am just a philanthropic, therefore, my only goal is to get people a space to make the items and donate it to me,” she said. “Then I get them to Streetknits which distributes them to homeless.”

Hope organized more than 50 women who gathered at the Imperial Pub, at the corner of Dundas and Victoria Streets, for a Warming Toronto knitting bee on Feb. 24, something she’s been doing for last four years. 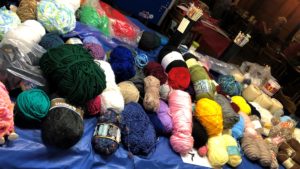 Donated knitting material to make hats and scarves for the homeless, Imperial pub, in Toronto, on Feb. 24, 2019. (Su Kustric)

The hats and scarves are donated to Streetknits, an organization helping Toronto’s homeless.

It was timely as temperatures plunged across the country, and despite warming shelters, staying indoors and warm is not always possible for the homeless.

Streetknits accepts donations of knitting material to make hats and scarves, which are distributed to shelters and organizations, who hand them out to the homeless, Sunny Hope said, a main organizer of the Warming Toronto event.

The event was promoted through social media and web pages such as Facebook, BlogTO, and Kijiji, but also through a word of mouth, Hope said.

People lose pairs of gloves and hats all the time, so Hope came up with an idea to make them for people who do not have the opportunity to buy them, she said. 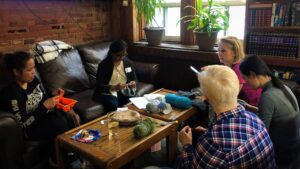 Volunteers knitting and preparing items for the homeless in Imperial pub, in Toronto, on Feb. 24, 2019. (Su Kustric)

Hope said all donations are on the right hands and are going to be given to people that are in need.

The first year they collected more than 100 items. Last year the number jumped to more than 400 and this year they might collect up to 600 items, she said.

It is very important that these people have something around their necks, on their heads and hands, so they don’t lose their fingers in this freezing weather, said volunteer Stephanie Leyn.

Knitters use a thicker yarn and double stitches for scarves and hats.

”Socks are made of really thin yarn but scarves or hats are made with very thick yarns, so if the yarn is thicker then we have to use double stitches, therefore it takes twice as long,” Leyn said.

She says knitting for others is also good for her and the other volunteers. It is a type of stress relief and manages anxiety, Leyn said.

“At the same time I am helping people in need, but also myself,” she said.