‘We’re dealing with a mafia’: Canada treads into Venezuela’s crisis 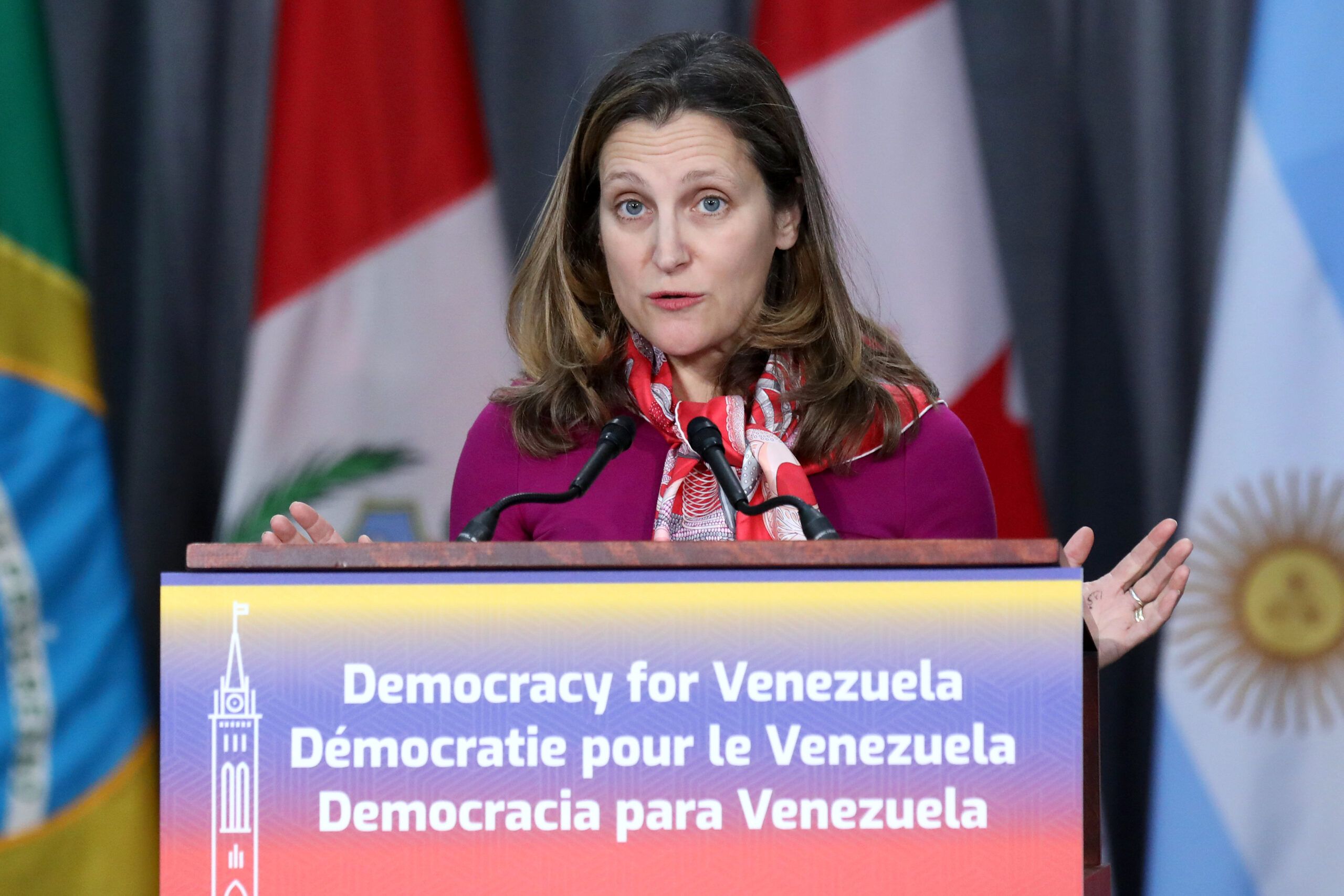 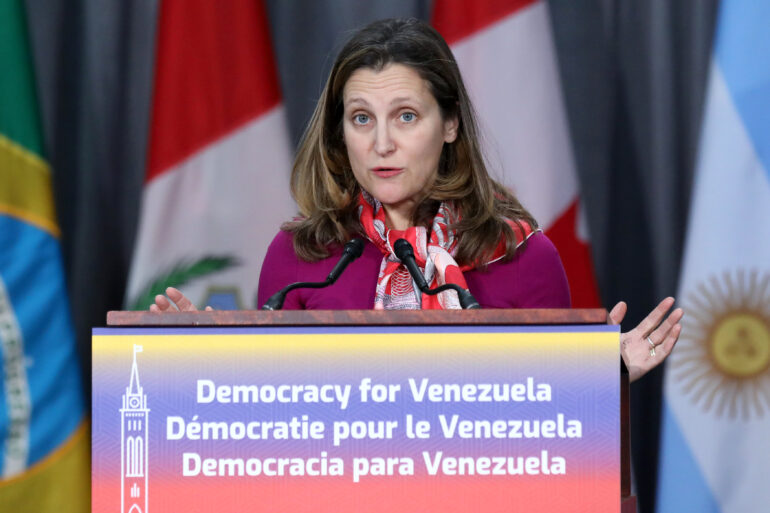 The Canadian government pledged to provide $53 million in aid to Venezuela on Monday, amid the country’s worsening humanitarian crisis and escalating political division.

The federal Liberal government announced the funding in Ottawa during a meeting of representatives from South America, known as the Lima group, of which Canada is a founding member.

Canada’s Minister of Foreign Affairs, Chrystia Freeland, called for an emergency meeting of the group — which was established in 2017 to restore democracy in Venezuela — amid mounting global support for opposition leader Juan Guaidó.

Freeland also joined a chorus of almost total worldwide condemnation of Venezuela’s socialist President, Nicolás Maduro, who was chosen to succeed Hugo Chavez after his death in 2013.

“Having seized power through fraudulent and anti-democratic elections held on May 20, 2018, the Maduro regime is now fully entrenched as a dictatorship,” Freeland said in a news release.

Delegates who could not make the trip to Ottawa for the conference joined via video feed, including U.S. Secretary of State Mike Pompeo and a special guest, Venezuela’s self-declared interim president, Guaidó.

Guaidó was elected as President of the National Assembly on Jan. 5 and declared himself interim president of Venezuela on Jan. 23, after invoking Article 223 of the Constitution, which designated Maduro as an “usurper” of power. 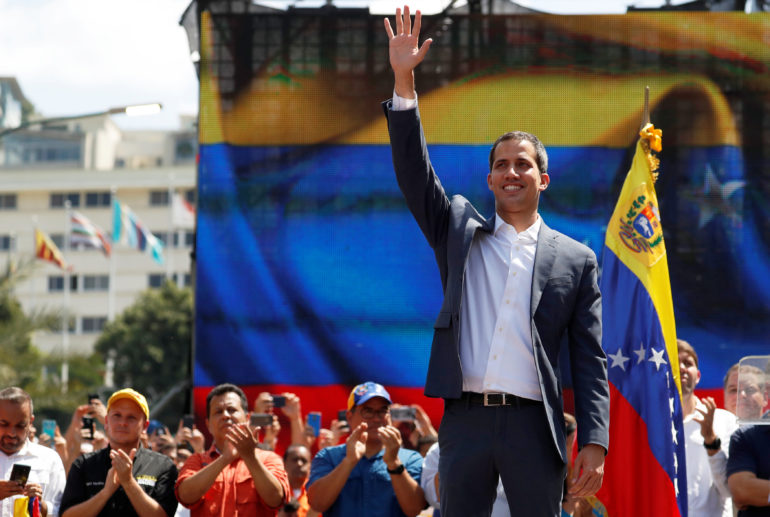 The $53 million of Canadian aid is intended to “alleviate the suffering of the most vulnerable” Venezuelans, by supplying emergency food assistance, clean water, education and healthcare, said Minister of International Development Marie-Claude Bibeau.

It includes $18 million to assist countries who have absorbed most of Venezuela’s three million migrants, such as Peru and Columbia. It also includes $16 million for life-saving supplies and $11 million for girls’ education along the Colombian-Venezuelan border.

The Refugee and Migrant Response Plan (RMRR), created in December 2018 by the UN High Commissioner for Refugees and the International Organization for Migration, was formed with similar intentions as the assistance plan approved by the Lima group.

It was designed to respond “to the needs of Venezuelans on the move” and secure “their social and economic inclusion in the communities receiving them,” according to a U.S. Congressional Research Service Report.

Despite the similarities, there is one stark difference between the two in terms of funding —  the RMRR appealed for $738 million to assist three million Venezuelan migrants.

Venezuelan citizens face shortages of basic consumer goods and food on a daily basis, due to the inefficiency and corruption of the military-controlled distribution system, said Juan Carlos Hidalgo, a policy analyst at the CATO Institute.

“The suffering of Venezuelans will only worsen should [Maduro] continue to illegitimately cling to power,” Freeland said.

U.S. President Donald Trump was one of the first world leaders to recognize Mr. Guaidó as Venezuela’s interim president, and stated the National Assembly was “the only legitimate branch of government duly elected by the Venezuelan people.”

President Trump declared that “all options are on the table” when asked about military intervention in Venezuela. Canada has so far refuted the idea.

“The combination of international pressure — not only diplomatic — but also economic sanctions, plus a reignited opposition under the leadership of Guaidó” will be the toughest challenge yet for Maduro, Hidalgo said.

China, Russia, Turkey and Iran have all pledged support for Maduro, whose regime has been accused of human rights violations, involvement in the illegal drug trade, and theft of government funds, according to a report by InSight Crime.

“We’re not discussing a standard dictatorship. We’re dealing with a mafia,” Hidalgo said. 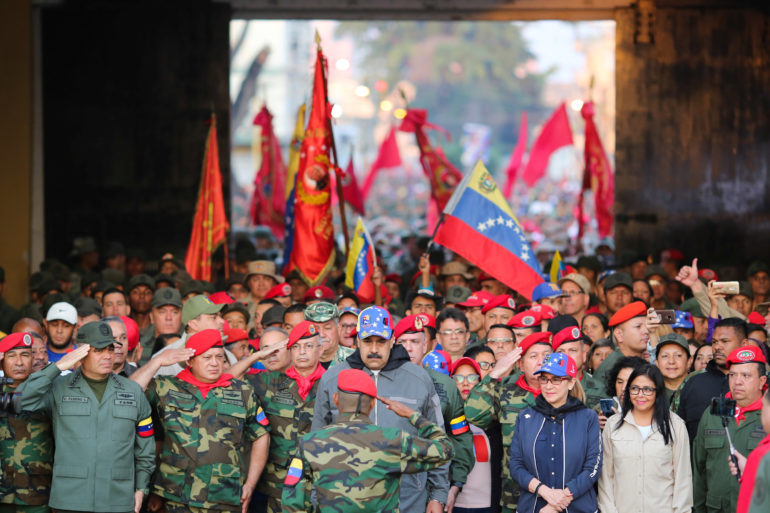 China and Russia have both invested heavily in Venezuela, which has the largest known oil reserves in the world — they contain more crude oil than those in Saudi Arabia.

“From 2007 through 2016, China provided some $62 billion in financing to Venezuela,” and that money was mainly repaid in oil deliveries, according to the Congressional Report.

But as oil production slowed in turn with the economic crisis, China halted their loan program, the report said.

If Maduro were to lose control of the country, China would not receive its pending $20 billion in loan repayments from Venezuela, Hidalgo said.

Nonetheless, Canada has demonstrated it’s not afraid to take the first step in vying for democracy in the region.

“It is clear that the only path forward is through meaningful negotiations and Canada is well positioned to continue to take a leadership role in supporting such an approach,” Freeland explained in a report to the Canadian Senate in 2018.

The Maduro regime must peacefully cooperate with Canada and other participating groups if negotiations are to be successful, she said.

A list of indisputable requirements for an agreement to be reached include the release of all political prisoners, recognition of the democratically elected National Assembly, and “a clear timetable for free and fair elections,” Freeland said.

But cooperation from the Maduro regime may not matter now, with Guaidó‘s ascent supported by Canada and a bulk of the rest of the world.