League of Humber battles in the Rift for skins 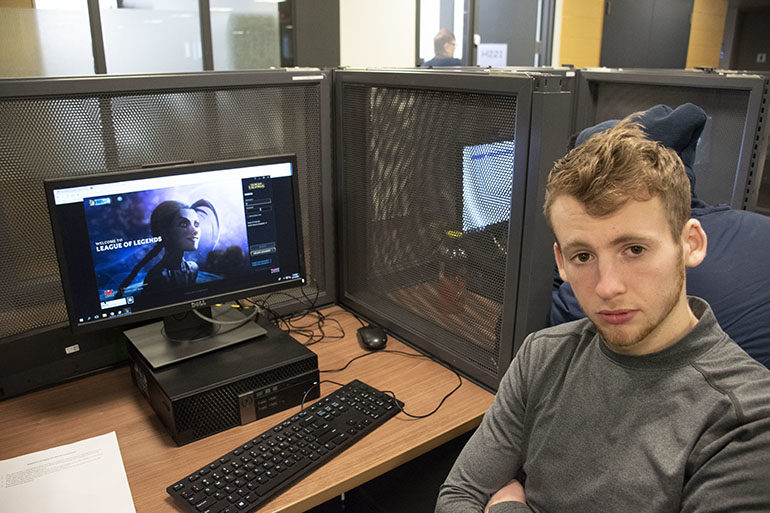 Willem Claassen, President of the League of Humber club, about to login and practice for the tournament. (Kelvin Tran)

Round one of the winter League of Legends (LoL) Tournament starts today for the League of Humber club. Six teams will go head to head for the grand prize of a special skin for their Champion funded by IGNITE.  All participants will also receive a mystery skin as well.

“We request a certain amount of money for events, so we use that,” said Willem Claassen, President of the League of Humber club. “In this case I bought RP (Riot Points) and was reimbursed for it, but it [did] not come directly from IGNITE, it does not have to go through IGNITE at all.”

League of Legends is a multiplayer online battle arena (MOBA) game released in 2009 by Riot Games. The game became massively popular, and is one of the biggest eSports to date, with a peak 205 million viewers in the 2018 World Championships.

Last year’s tournament did not get reimbursement from IGNITE due to timing issues.

“There’s a certain point where I did my reimbursement too late, and one way or another I wasn’t able to get reimbursement from IGNITE, because I did some paperwork too late,” Claassen said.

The tournament will take place throughout the whole semester, with nine weeks of round robin competition and one week of play-offs. Matches will be arranged with the team captains at their discretion.

The first week will be unique as participants have to complete two rounds instead of one.

“The round robins are online, meaning you don’t need to do them at school if you don’t want to. Matches taking place will depend on the team captains, each week all teams are required to do one round. This week is special as they are required to do two rounds,” said Jimmy Nguyen, the event organizer and captain of the Comebackables.

“I really like the team aspect of League, especially when it’s friends you play with. It’s team oriented just like other sports like soccer, volleyball, etc. Everyone has the same goal as you and you have to work together to outplay the enemy team in order to win the game,” said Rafael Martins, a member of the Comebackables.

“You also get to meet new people in events like the League of Humber club,” he said.

Claassen said as long as the names are not seriously offensive or inappropriate, he won’t make them change the team names, but if they are,the team will be disqualified from the tournament.

The final week of play-offs will be from April 15 to 26, the top two teams will face off against each other in a best of three.