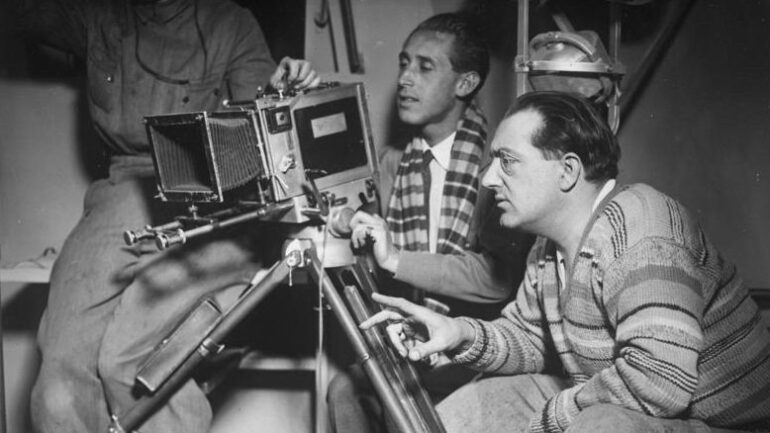 Fritz Lang (right) was known as one of the most notable German expressionist filmmakers, and later became one of Hollywood’s best, with multiple classics under his belt. (Wikimedia Commons)

Fritz Lang’s silent film masterpiece Metropolis opened with a message strewn across the projection screen in bold letters, which slightly illuminated the interior of the antiquated church.

“The Mediator Between the Head and the Hands Must Be the Heart,” it read.

The German expressionist science-fiction film, originally released in 1927, screened alongside a live avant-garde soundtrack to a packed audience at the Melrose United Church in Hamilton on Saturday, Feb. 23.

The plot of Metropolis follows two main characters: Freder, the son of a rich businessman who built the futuristic city in which the film takes place, and Maria, a virtuous leader of the workers who operate the integral machines that run the city.

They both desire to eradicate a powerful class divide and unite the disgruntled workers of the city — who reside underground — with the rich, who live high above the ground in looming, luxurious skyscrapers. 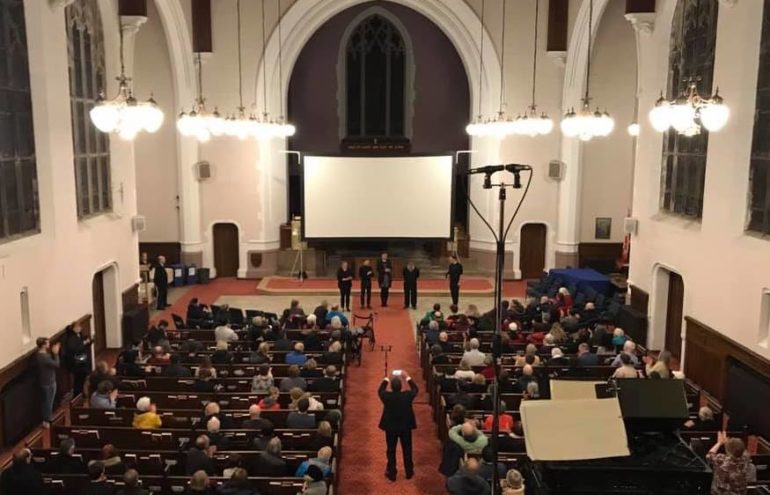 The church remained packed after the film ended as audience members asked questions of Artistic Director Alexander Cann and four of the local musicians about the production. (Facebook/Bach Elgar Choir)

The film, 92 years old and inspired by attitudes in the aftermath of the First World War, was still able to strike a chord with the modern Western audience in the church.

It touched on relevant themes present in today’s world, such as automation, inequality, and revolution.

But audience members, both old and young, had no trouble keeping up with the film’s complex themes. Their only qualms came when they ran out of popcorn.

The restrictions of silent film, combined with the aesthetics of German Expressionism, painted a surreal set of images in Metropolis that did not require sound to understand.

“Silent films have to show you everything,” Cann said. “They cannot rely on sound cues.

“The actors’ gestures are deliberately exaggerated, the crowd scenes are carefully choreographed in ways that defy naturalistic expectation, and the sets are psychologically suggestive,” he said.

While the plot was understandable for the most part, the expressionistic, politically-charged content of the movie was unsettling to view for some audience members.

“That’s one of the weirdest things I’ve ever seen,” an elderly woman remarked as the film ended and the credits rolled.

In a question-and-answer session after the screening, Cann introduced the audience to the Bach Elgar Choir and the accompanying instrumentalists: Krista Rhodes on piano and organ, Connor Bennett on saxophone, Evelyn Charlotte Joe on bass, and Chris Palmer on electric guitar.

The choir, whose origins date back to 1905, and the musicians had only rehearsed once in full alongside the movie prior to the lengthy performance, which impressed the crowd and warranted a strong round of applause. 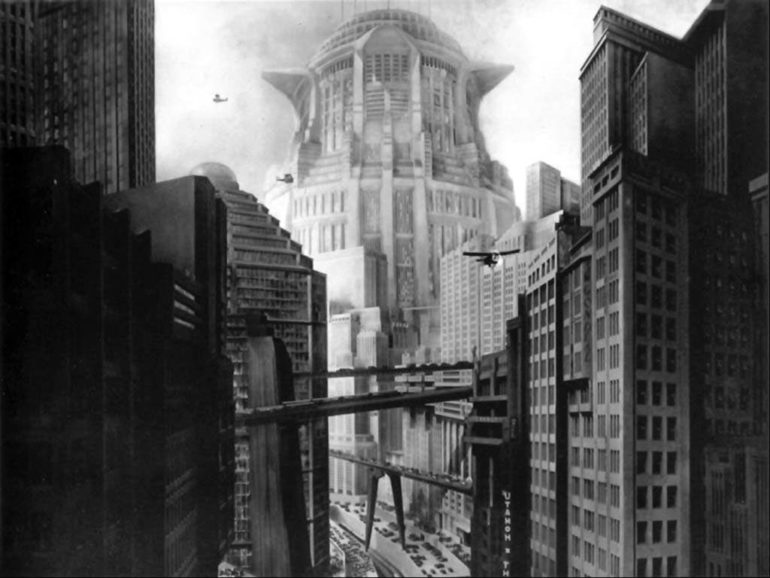 Metropolis features pioneering special effects for 1927, including the use of miniatures to create a realistic, futuristic city. (Flickr/Breve Storia del Cinema)

A majority of the score was improvised, including unsettling strikes of electric guitar, eerie organ chords, and various onomatopoeic sounds made by the choir, which acted as sound effects for the rattling machines of the city.

Cann explored avant-garde choir recordings — of which there are apparently very few — to garner fresh inspiration after viewing the film multiple times with its original orchestral score, composed by Gottfried Huppertz.

“I first encountered [Metropolis] at the age of eight or nine, fascinated by the stills of robots and gleaming cityscapes in my sister’s film textbooks,” Cann said.

Despite most of the content going over his head as a child, intrigue and curiosity resulted in repeated viewings, including one in the basement of the “spooky” Bathurst Street United Church in Toronto.

“It captivated me and the rest of the small audience … as if we were witnessing a holy relic,” Cann said.

Brief sections of the original soundtrack bookended the film, but the majority of the new score was intended to be more atmospheric than musical, he said.

The atmospheric aesthetic Cann strived for was a good match for the film’s pioneering special effects, which impressively still hold up today, in the dominant age of computer-generated imagery or CGI.

Special effects expert Eugen Schüfftan worked on the film to create miniature sets for the futuristic city, in addition to the use of multiple mirrors to fabricate the illusion of real people occupying miniature sets.

“The hope was to serve Lang’s vivid, and sometimes disturbing, expressionism,” Cann said.

And almost a century after the original release of the film, Cann and his company served that vision for a modern audience in a fittingly atmospheric setting.