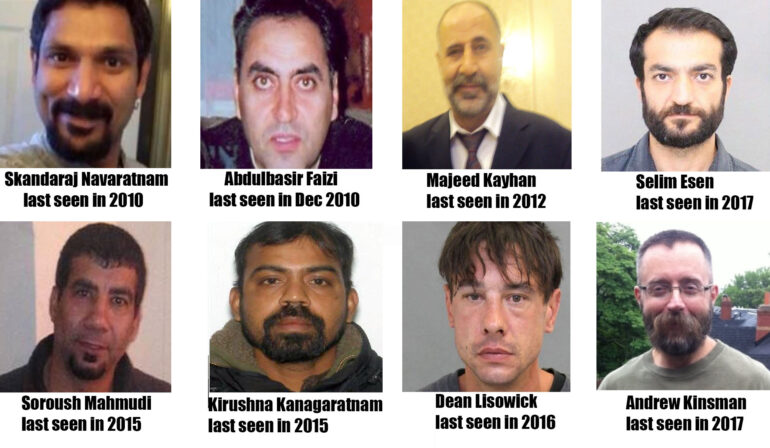 The victims of Bruce McArthur.

The sentencing trial of confessed serial Bruce McArthur began Monday morning with a summary of the evidence and victim impact statements from the friends, family and community of McArthur’s victims.

Sentencing was not expected until 2020, but McArthur pleaded guilty to eight counts of first-degree murder last week.

Meaghan Marian, a neighbour of McArthur’s last victim Andrew Kinsman, said in her impact statement she was grateful to McArthur for entering a guilty plea. She said it allowed her to hear McArthur admit to his crimes in his own voice.

Marian described Kinsman as a warm person, a “fabulous cook, but a clumsy one,” who she could hear cursing dropped plates through the floor between them. Kinsman was the superintendent of the building they lived in, and she described how once he took the position, he slowly transformed the run-down building into a place all the residents could be proud of.

Another friend of Kinsman’s said he and Kinsman had once been close, before a falling out. He said he always thought they would resolve the issue.

“I thought we had time,” he said, looking at McArthur. “The offender took that time away.”

Nadia Wali spoke on behalf of Selim Esen’s family. She said the family was unable to come to terms with the murder, and found it difficult to accept that eight men could go missing over such a long period of time without the police finding anything.

“If someone could explain this to us,” she said, “please let us know.”

Esen’s family’s words were echoed by Jaymie Sampa, of the community group The 519. Sampa said LGBTQ+ people told the organization they felt unsafe amid the disappearances.

“For years, members of the LGBTQ+ community in Toronto believed they were being targeted by a killer. They were right,” Crown attorney Michael Cantlon told the judge.

Before the hearing began, Cantlon issued what he said was a rare warning to the general public gathered in the busy courtroom, telling them that details of the case could “impact your health and wellness, and impact how you sleep.”

Through the morning and into the afternoon, Cantlon detailed the murders of each of McArthur’s victims. He explained how the police had found photos of the victims on a USB drive.

The USB drive had a directory with nine folders.

The folders were labeled Skanda, Basir, Hamid, 4, 5, Slider, Turkish Guy, and Andy. There was a ninth folder, John, for the man who was in his apartment at the time of McArthur’s arrest.

McArthur also kept items from some of his victims, as well as the murder weapons. Bags of the victims’ hair were found at a house McArthur had access to in his work as a landscaper.

Cantlon said McArthur was found after his van was caught on surveillance cameras outside of Kinsman’s apartment. Police narrowed down the kind of van with the help of a manager at a Dodge dealership. The Ministry of Transportation then provided a list of 6,000 possible vans.

Cantlon said police cross-referenced the list of vans with a name they had found written on Kinsman’s calendar on the day he disappeared.: “Bruce.”

McArthur was the only match in the database. Blood and other DNA was found in his van when it was located at a wrecking yard.

The Crown showed the court a part of the murder weapon, a bar, in several places, including a post-mortem photo cropped so as not to show the victim, in McArthur’s apartment, and in a drawer in his apartment.

There were at least three incidents during which McArthur had contact with police before his arrest on Jan. 18, 2018. The first was in 2003, when McArthur was charged with assault after hitting a man with a metal bar. McArthur said he and the man had a sexual relationship.

McArthur then had his record suspended. The Crown said he had already committed three murders “undetected” at that time.

The second incident was in 2016 when McArthur tried to strangle a man in the back of his van. The man escaped and called 911.

The Crown pointed out that a criminal record check would not have turned anything up, because of McArthur’s record suspension.

McArthur was released without charges.

Cantlon said that McArthur was also interviewed by police in November 2012 as part of Project Houston, a few weeks after Adbulbasir Faizi went missing. Project Houston was the first of two investigations into missing persons in Toronto’s Church-Wellesley area.

At the time, McArthur said he had employed Faizi briefly in his landscaping business, and that they had a sexual relationship which McArthur had broken off.

McArthur was not considered a suspect at the time.

Faizi’s van was found abandoned about a kilometre from a house McArthur had access to in his work as a landscaper.

Cantlon said that many of McArthur’s victims had things in common. Six of the men were of Middle Eastern or South Asian descent, and some had trouble finding stable housing. Others hid their sexuality from their families. Cantlon said that these factors made it easier for McArthur to target them.

Cantlon said that another victim, Kirushna Kanagaratnam, was never reported missing by his friends. Kanagaratnam’s refugee claim had been denied, and he was scheduled to be deported. Cantlon said it’s likely his friends believed he was hiding to avoid deportation.

Friends and family of his eight victims have submitted impact statements for the judge to consider before determining McArthur’s sentence. They will read them this afternoon and tomorrow. Family of Selim Esen and Dean Lisowick will be listening in by phone.

McArthur faces life sentences of 25 years for the murders, served either concurrently or consecutively. He will not be eligible for parole until he is at least 91.

An external review has begun into how Toronto police handle missing persons cases. The review will look into the McArthur killings, among other cases.

The court will reconvene Tuesday at 10 a.m. to hear more victim impact statements.