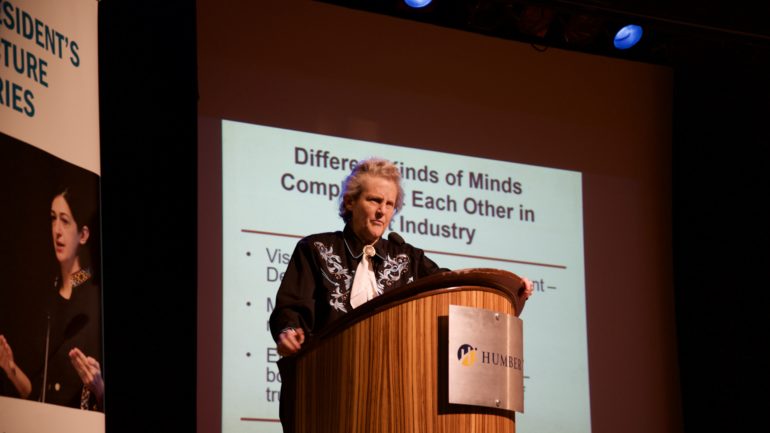 Temple Grandin, an animal sciences professor from Colorado State University, told a Humber audience that autistic people are better at anticipating risks than others on Feb. 7 at Humber Lakeshore. The speech was a part of the president’s lecture series. (Hiren Mansukhani)

Autistic minds are better at anticipating risk than others, according to animal science expert Temple Grandin.

Grandin, a professor at Colorado State University, told a Humber audience at the college’s Lakeshore campus on Feb. 7 that people who are diagnosed with autism are usually visual thinkers and as employees, they are essential in the workspace.

“Visual thinkers see risk instead of calculating them,” Grandin said. “There are some risks that cannot be calculated but can only be mitigated by visualizing them.”

She illustrated her opinion by talking about the Lion Air crash which took place Oct. 29, 2018.

“The engineers never visualized what would happen if the sensors were broken,” Grandin said. “They weren’t prepared because you can’t calculate it. You need a visual thinker to assess these kinds of risks.”

She said early tech-enthusiasts were overly optimistic about social media and their inability to see risks prevented them from anticipating the threats of fake news and cyberbullying.

Grandin said a genomic trade-off theory published in 2018 by scientists James Sikela and Veronica Searless said the same genes responsible for autism made a brain bigger.

Complex social interactions take up mental space and autistic people use it for more cognitive tasks instead, she said.

Grandin said this is essential for the further enhancement of humans.

“It would have been some autistic guy who chipped rocks by himself and discovered fire. It surely wasn’t the social yakkity yaks,” she said.

Grandin cited Steve Jobs and Thomas Edison, who were autistic and had successful careers.

She also had advice for autistic students who find it hard to socialize among their peers.

“They would make friends through shared interests,” she said.

In order to increase chances of landing jobs, she said autistic students should start building an extensive portfolio of their work.

“Create a portfolio. Make YouTube videos, samples, clips and store them. They could be used in an interview when you are nervous. Your goal should be to sell your work and not yourself,” Grandin said.

“You start pursuing and developing a passion only for paths that you are exposed to,” she said. “I wouldn’t have taken animal science if I didn’t visit my aunt’s beef cattle when I was a kid.”

“The reason why iPhone is one of the most unique phones is because of Steve Job’s innate love for calligraphy. That would have seemed like a useless hobby back then,” she said.

Ian Gerrie, the chairperson of the President’s Lecture Series, said Humber will try its best to include such activities in its programs.

“It is good to rethink how we are teaching and the extent to which we need to introduce visual teaching in our classes,” he said.

Grandin advised students to focus on their strengths than beating themselves on their weakness.

“Don’t pound yourselves on the deficit. Do what you can do and forget about what your disability prevents you from doing,” she said.