An eyeopening show for men at The Second City 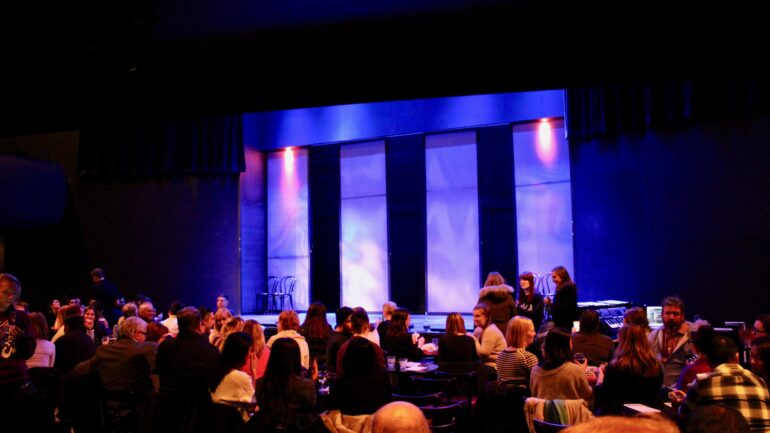 It was an evening of laughs and revelations at The Second City theatre’s presentation of She the People to a packed house in Toronto on Feb. 1. (Alisha Mughal)

Ann Pornal and Kirsten Rasmussen, members of the ensemble cast of She the People, began the sketch dancing off the stage, then Pornal dragged Rasmussen on stage and started peeling off her layers of shapewear.

The sketch was about the work women put into performing femininity — superficially, though, it was a striptease.

Pornal’s character took so long to remove her Spanx that Rasmussen’s character fell asleep, but not before a man in the audience yelled, “Yeah, take it off!”

This reaction to Pornal’s comedic disrobing proved the show’s necessity: its various sketches shed light on women’s labour, intellectual and manual, that is often ignored by men.

Second City Toronto’s presentation of She the People, a sketch comedy show put on by women, delivered its searing and comedic takedown of the patriarchy to a packed house on Feb. 1. The message was brand new to some of the men present and lost on others.

The majority of the audience was comprised of women and most men in attendance were there with female friends or dates.

Groups of women ensconced in clouds of perfume sat at the round tables, cabaret-style, greeting those unknown to them with wide smiles, ordering a glass of the house wine before the show.

It was -9 C outside, but inside the air was fresh, not stuffy and hot.

The sketches — some skits, some songs — were undergirded by a trembling feeling of exasperation on the cast’s part.

This exhaustion could be felt in the laughter of the women in the audience, too, which got increasingly unrestrained as the night wore on, as the wine flowed.

“This is good,” a man in the audience said, leaning into the woman next to him — she didn’t turn to nod, didn’t verbally agree, just continued to laugh.

It was almost a moment of discovery for some of the men in attendance, discovery of something women have always known.

“Look at me smiling, I love cleaning,” Karen Parker’s character said in one of the first sketches about commercials directed toward women — she smiled a smile that almost cracked into lunacy, so wide it was.

“I’m a woman in a maxipad commercial,” Tricia Black’s character said in the same sketch, asking to be taken to the hospital for bleeding a blue liquid, referring to the windshield-washer-blue fluid used in commercials.

“Very topical,” he said, after a sketch about rape culture that depicted a young girl telling on a boy who pushed her and who was told that no one would believe her words, that she would probably be blamed for provoking the push.

It was a skit about the work older women have to do to educate young girls about the victim-blaming culture that, despite most women’s efforts, still exists.

The sketches nodded toward the fractures in the patriarchal structure holding up society.

The comedic guise in which the messages were delivered, the messages that themselves were complaints of injustice become mundane, which needs to be navigated by most women everyday because they’re too busy or tired to countenance it head on and fight it — this comedic guise was salutary.

Most women in the audience were too busy laughing their lungs out, exorcising their worries and fears, to hear the man in the back of the theatre heckle Pornal and Rasmussen.

As the night wore on and as the women got more drunk, the girls’ night out that the evening was for some of the groups present, became sobering by its incisiveness, and so needing to be blunted by drunkenness.

She the People provided women with a necessary catharsis, even if its necessity was lost on the man who heckled during the striptease.

The show’s title asks that women be treated equally, as people, and the heckler’s words seemed to deny that.