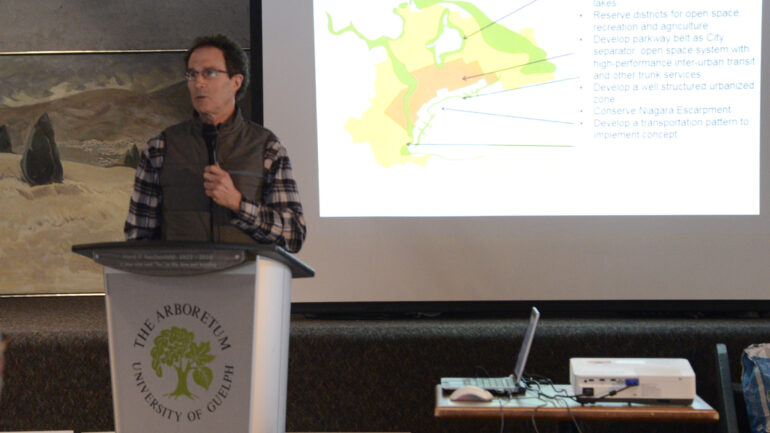 Planner Victor Doyle speaks to the public about threats to local water sources at the Protect Our Greenbelt event at the Guelph Arboretum Centre on Feb. 2. (Brendan Pietrobon)

Environmentalist groups and local politicians sent the province’s government a clear message on Feb. 2 in Guelph: they are ready to defend the greenbelt.

The Protect Our Greenbelt event, hosted by the North Dufferin Agricultural Community Taskforce (NDACT) at the University of Guelph Arboretum Centre, featured guest speakers Mike Schreiner, MPP for Guelph and leader of the Ontario Green Party, and Victor Doyle, the “architect of the greenbelt,” a planner and formerly a senior provincial bureaucrat with the Ministry of Municipal Affairs.

At issue was Bill 66, the Restoring Ontario’s Competitiveness Act, 2018, an omnibus bill that covers everything from changing zoning laws, childcare ratios, long-term care, to environmental regulations.

Of particular concern was Schedule 10, an amendment to the Planning Act that would allow municipalities to pass “open-for-business” by-laws.

Steve Clark, the Minister of Municipal Affairs and Housing, announced on Jan. 23 that the government was withdrawing schedule 10.

“The use of this tool would never be approved at the expense of the Greenbelt or other provincial interests like water quality or public health and safety,” he said.

“However, our Government for the People has listened to the concerns raised by MPPs, municipalities and stakeholders with regards to Schedule 10 of Bill 66 and when the legislature returns in February, we will not proceed with Schedule 10 of the Bill,” Clark said.

Schreiner said he’s happy the people of Ontario spoke out so strongly against Schedule 10 and Bill 66.

Schreiner said he would be proposing a private member’s bill, the Paris-Galt Moraine Protection Act, to protect the drinking water around the Guelph area once the legislature is back in session.

Sandy Agnew, of the conservation group AWARE Simcoe, said his group isn’t done after the withdrawal of Schedule 10.

“We’re kind of in wait-and-see mode right now. We’re meeting with various MPPs trying to get them on side,” he said. “We’re still recruiting folks and we’re going to carry on for as long as it takes.”

The event was attended by more than 50 local activists and members of the public.

Karren Wallace, chair of NDACT, was encouraged by the public response to the event.

“There was a little boy in the back row, he might have been 10 and it was his idea to come out here,” she said. “That’s who we need to reach. There were a lot of new faces here today, so it was really, really good.”