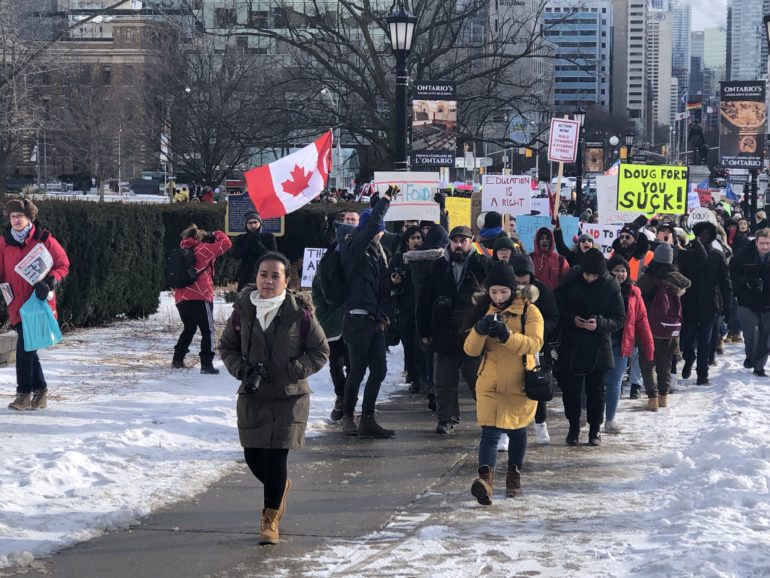 Students march into Queen’s Park chanting, “What do we want? Free education! When do we want it? Now!” The students are part of a protest against changes to OSAP funding. (Michelle Guo)

About a thousand students rallied at Queen’s Park to protest the Progressive Conservative government’s changes to the Ontario Student Assistance Program (OSAP) in a loud but peaceful demonstration.

Chants of “OSAP, ASAP!” and “Whose province? Our province!” filled the park as students waved flags and brandished homemade signs.

Nour Alideeb, the chairperson for the Canadian Federation of Students, told the crowd to take a good look around.

“I want you to look to your left, and look to your right,” she said. “The next time we are here, we are going to double in size.”

“We need to create space for people to organize because we’re going to organize the hell out of this province.”

The Friday afternoon rally was the second in a week, with another protest having taken place on Jan. 18. A third protest is planned for Mon., Feb. 4.

Under the new OSAP system, there will no longer be a six month grace period after graduation before student loans start to accrue interest.

Alejandra Mendoza is a Graphic Design student at the Ontario College of Art and Design University. She said it’s difficult to pay tuition, and that having to pay her student loans immediately after graduation didn’t make it easier.

The new system is more loan-based than grant-based, meaning students have to pay back more of their loans than they did before. Free tuition for students from low-income families has also been eliminated.

Josie Weir, a mature student in a community work program at George Brown College, said that these cuts will have a big impact on her life.

“I’m on my own,” Weir said. “No one’s supporting me, I don’t have any other means of income. I rely on OSAP not just for education, but I rely on it for living.”

Opposition leader Andrea Horwath offered her encouragement to the crowd.

“I have been to many, many rallies here at Queen’s Park,” Horwath said. “Some have been bigger, and some have been smaller, but you are the loudest.”

“We all know that past generations have not faced what you’ve had to face,” she said, citing high tuition fees.

Horwath said that Ontario had the highest tuition fees in the country.

“And after all of that struggling… you graduate with mountains and mountains of debt.”

The government has said that the cost to students from their loans will be offset by a 10 per cent reduction in tuition fees.

Chris Whitaker, president of Humber College, said that means a $10 to $12 million decrease in revenue for Humber.

Whitaker told Humber News that the college usually operates with “a modest surplus” at the end of the year. Now, he said, “we don’t anticipate that we’ll be demonstrating that surplus.”

The Ontario government put a freeze in place to prevent colleges from raising tuition fees until 2020. Whitaker said that meant Humber College would need to tighten its belt next year, as the school’s operating cost continues to increase by 4 to 6 per cent a year.

“[It] will be in administrative areas,” he said, and cuts “won’t be in areas that directly impact student programs and services.”