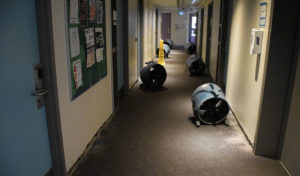 The first floor of the s residence at Humber’s north campus is filled with industrial fans after broken pipes flooded the hall on Jan 24. 2019. (Austin Spearman) 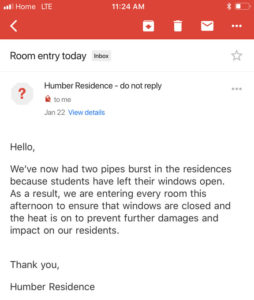 Approximately 12  students at Humber College’s north residence have been displaced by flooding from burst water pipes.

Lucien Lozon, a first-year Radio Broadcast student, discovered the flooding at 1 a.m. Tuesday when water rushed down his hall.

“I turned my light on and there was water seeping in from my door,” Lozon said. Other students on the floor also received a rude awakening, they said. Maintenance were on the first floor of the S building residence until approximately 3 a.m. using industrial fans to dry up the floor.

Later that day, residents received an email saying open windows in students’ rooms led to the broken pipes. In a separate email, Humber Residence instructed students to leave all doors unlocked so heating units could be checked by staff to ensure they are functioning properly.

Andrew Leopold, Humber’s director of communications, said that weather-related issues and an unattended room were the true cause of the break.

“In at least one of the cases, one of the residents had been away from their room for some time with their window open,” Leopold said. “Their heat was off and that would lead to the pipes getting cold and bursting.”

Residents on the first floor of S building were asked to either move to Lakeshore campus or find another place to stay for the rest of the week. Students who chose to go to Lakeshore were offered paid cab rides to and from the north campus and a $12 laundry card to cover any damage to clothing during the flooding.

Students who weren’t on the same floor as the broken pipes were also affected. Kolin Perry, a first-year Graphic Design student, said he didn’t have any water damage but was ordered to have an industrial fan be placed in his room, and faced room checks by staff after midnight.

“The workers were coming into our room constantly, and waking us up at 2 a.m.,” Perry said. “We had people coming in and out of our rooms telling us to leave the doors unlocked even after an email stated that no one would be entering our rooms.”

Repairs are still ongoing at the residence as students try to return to their lives to normal.