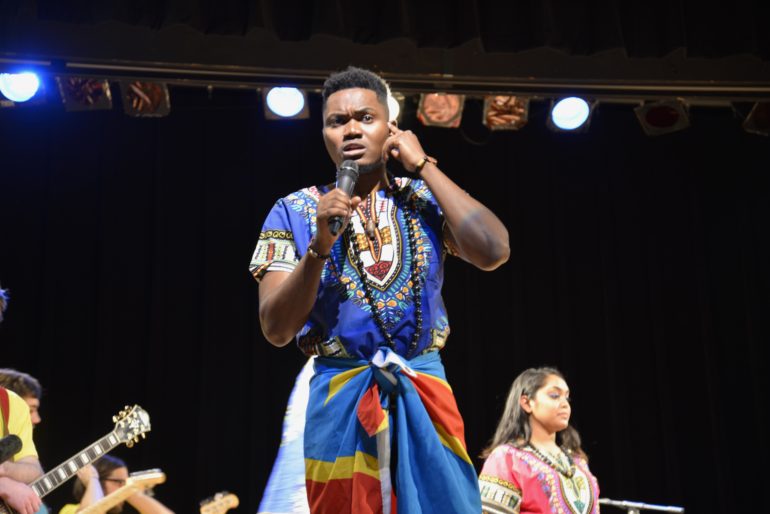 The first world jazz lab of 2019 was assembled in Humber College Lakeshore campus on Jan. 18.

The event was divided into three musical parts: Humber world jazz, a drum ensemble and a jazz lab by three different directors, said host and instructor Steve Mancuso. Costumes worn by the performers also reflected the different themes of their music.

Ravi Naimpally, who is a director and program coordinator of this event, presented the first half of the showcase, led a team of Humber student musicians that were non-Western composers of South Asian background and Argentina.

Naimpally said they played Indo-Western music, a blend of traditional Indian instruments with piano, electric guitar and trumpet, and they created a vibrant musical landscape by fusing the music with jazz.

Between 200 and 300 people came to Lakeshore auditorium to watch this event with excitement and enthusiasm.

Elizabeth Carson an audience member said the show’s ticket price is very reasonable as compared to other music concerts. Tickets were $10 for Humber students and staff, and $15 for the general public.

Savannah Raeburn-Gibson a performer said the preparation for this event started by the artists since last September.

According to Jonathan Nvita another performer, the event had Vietnamese, Brazilian and African music which was sung by the artists.

This was a new showcase for the audience which made them more excited to watch, audience member Joe Marini said.

“We come all the time.  I don’t know we actually been to this particular type of show, so this will be kind of interesting,” he said.

This was the second concert by Humber School of Creative and Performing Arts for the audience, performer Teagan Larmand Bass said.

The second portion was led by Mancuso, who was part of the performance and his team used different types of musical instruments.

For the finale, the music and vocals of a Brazilian and African blended style was led by the students of director Waleed Abulhamid.

The artists successfully wrapped up the show and their performances were fantastic, audience member Tim Scott said.

At the end of the show, the audience came onto the stage and danced along with the artists, which the audience found was the most joyful moment of the concert.