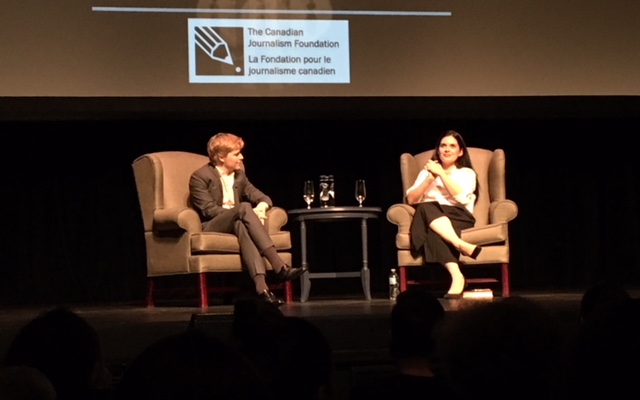 Toronto, Ont. — Ronan Farrow was close to 30 minutes late for his talk with Robyn Doolittle of The Globe and Mail at a Canadian Journalism Foundation special presentation on Sunday night.

Still, given his busy schedule, it’s a wonder he was able to find the time to make his way to the St. Lawrence Centre for the Arts to speak with Doolittle and receive the 2018 CJF Special Citation for excellence in journalism.

On top of the ground-breaking journalism Farrow has produced for The New Yorker, including his Pulitzer Prize-winning investigation into sexual-assault accusations against Harvey Weinstein, Farrow is also currently writing his second book, developing his own HBO television show and recently submitted his PhD at the University of Oxford, which he is set to defend in a month.

Not to mention the book he published in April, “War on Peace: The End of Diplomacy and the Decline of American Influence”.

When Farrow arrived, the sold-out theatre welcomed him with enthusiastic applause. Then he and Doolittle joked about his delay at Toronto Pearson International Airport, Tim Hortons and Canadian politeness before delving into the details of his work and life as a journalist.

Farrow has received widespread acclaim for his Weinstein investigation, but he said that during the process he was riddled by stress and filled with fear because of the delicate and monumental nature of the story.

“I didn’t know if I would ever have another job in television and had been told that I was terminated at my current job (NBC) after I refused to stop reporting the story,” Farrow said.

“I was getting threatened. I was getting physical death-threats. I had moved out of my home. I was not sleeping a lot,” he said.

Despite his work exposing sexual violence in Hollywood and elsewhere, which helped spur the Me Too Movement, Farrow was clear in saying he is not an activist.

“I’m going to steal that,” said Doolittle in agreement.

I arrived at work this morning feeling totally invigorated after speaking with the incredible (and annoyingly brilliant) @ronanfarrow. Thank you to the Canadian Journalism Foundation for hosting this amazing event and to Ronan for a very smart *and* Tweetable conversation.

Farrow also keyed upon the “shrinking space” for nonpartisan, fact-based journalism that he believes is important.

He said he receives reaction from some Democrats claiming he is a “Trump plant” and from Russian Twitter bots saying he deserves to “die in a fire” because of his reporting on a Republican.

“There are people out there who really passionately believe that everything slots into this partisan warfare,” he said.

Farrow’s impactful reporting includes detailing sexual misconduct accusations against Eric Schneiderman, the former Attorney General of New York; Les Moonves, the former CEO of CBS, and Brett Kavanaugh, Donald Trump’s nominee for the Supreme Court who was in the end confirmed by the United States Senate after much debate and controversy.

Farrow’s book, War on Peace, focusses on another of his fields of expertise — American diplomacy around the world.

In his book, Farrow said he promotes the importance of active American diplomacy, details the challenges and ethical quandaries that come with negotiating with warlords and tells stories of his experience working under Richard Holbrooke, a former American diplomat, which was sometimes unusual.

“The chapter is called ‘The Shower Scene,’” said Farrow, before he described his unconventional job interview with Holbrooke.

“Just about everyone had a story about him enthusiastically and obliviously following them into a bathroom,” Farrow said.

“This was pre-Me Too,” he said jokingly.

The night ended with a look to the future as Doolittle asked Farrow a question from a 15-year-old aspiring journalist in the crowd seeking advice.

“It’s such important work. It’s so fulfilling. I’m grateful every time I have the chance to expose something meaningful, to amplify a voice that isn’t being heard,” he said.

“I hope you are the answer to that quandary of how we go forward, how do we break more of these stories and how do we hold the powerful accountable,” Farrow said. “It’s a hassle, but it’s really worth it.”