Just For Laughs festival back for its seventh year

Toronto’s biggest comedy festival JFL42 kicks off tonight with 42 comedy acts spread out over the next nine days. Some of the big names that are coming to the North include Seth Meyers, Joe Rogan, Wanda Sykes, Hannibal Buress and Chris D’Elia.

The festival is in its seventh year in Toronto and offers fans a unique experience thanks to its digital ticketing system.

“This groundbreaking comedy experience created by Just For Laughs invites its fans to choose their own adventure with a flexible pass and ticketing system that gives the advantage of both a traditional and new way to enjoy stand-up comedy,” said Just For Laughs in a press release.

Fans can purchase a digital pass which allows them to see as many shows as they want during the duration of the entire festival. The pass, which is digitally stored on user’s phones, gives users a certain amount of credits which can be used to reserve seats at shows. When the user shows up at a show that they reserved and they check-in via the app, their credit is refunded and they can immediately reserve a seat at another show. 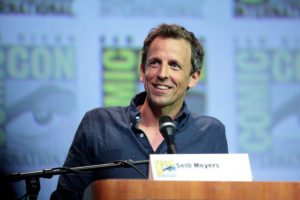 Late night talk show host and comedian Seth Meyers is one of the festival’s headliners this year. (Flickr/Gage Skidmore)

The festival also offers the option of simply purchasing single-event tickets if fans don’t want to purchase a digital pass.

With some of the biggest names in comedy booked for this year’s festival, comedy fans around Toronto are more excited this year than ever before.

“I’ve been going to the JFL festival in Toronto the last few years and this is by far their best lineup yet so I’m pretty excited,” said Howard Shih, an engineering student at the University of Toronto. “This is also the first year that I bought a pass so I’m hoping to see as many shows as I can,” he added.

The festival is also bringing back ComedyCon for its third year, which is the festival’s daytime program. Throughout the week, ComedyCon will offer fans behind-the-scenes access with comedians. This will include live podcast tapings, sit-down conversations and panels.

A handful of comedians such as Chris D’Elia, Ken Jeong, Jo Koy and Margaret Cho will appear In Conversation. The cast from CBC’s Workin’ Moms will appear for a panel discussion, and a number of popular podcasts such as Dax Shepard’s Armchair Expert will tape an episode in front of a live audience.

JFL42 runs from Sep. 20 to 29 and passes and tickets can still be purchased on their website.