R-rated coming-of-age film screens for free in the U.S. 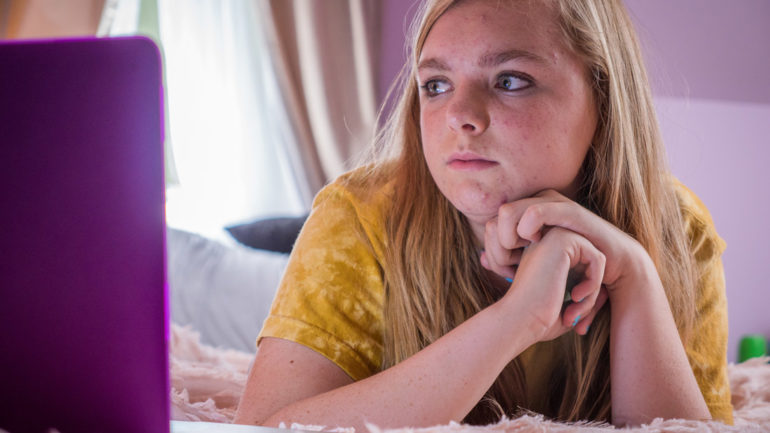 “Eighth Grade” tells the story of an eighth grader’s final weeks before she goes off to high school. (Sundance Institute)

American comedian Bo Burnham’s directorial debut, “Eighth Grade,” is a movie that’s all about teenagers. But teens couldn’t see it in the U.S. because it was R-rated.

But a move to show it for free Aug. 8 circumvents the ratings restriction, which was given for coarse language and sexual content.

A24, the film’s distribution and production company, announced it will host free screenings in one theatre in each of the 50 states. The company said the film’s R-rating would not be enforced at the screenings.

The American rating set by the Motion Picture Association of America effectively shut out “eighth-graders” under the age of 18 across the United States to see the realistic film unless accompanied by adults. Sensitive themes are explored in the film, which could make it uncomfortable for young viewers if surrounded by their parents.

Tomris Laffly, a New York-based film critic, believes the film’s R-rating is detrimental to its intended impact on young people.

“Leave it to MPAA to keep American eighth graders from seeing a film about themselves by slapping an R-rating on it,” Laffly told Humber News. “I applaud Burnham and distributor A24 for this effort and giving those who can benefit from this film the most, unrestricted access.”

The film was rated 14-A in Canada, meaning anyone 14 and under must be accompanied with an adult. The film is now in theatres across the country.

“If you’re in the eighth grade, here’s your chance to see the movie near other eighth graders,” Burnham said on Twitter about the free screenings.

The film was widely released across the United States and in Canada on Aug. 3 and received critical acclaim across the board for Burnham’s script and star Elsie Fisher’s debut acting performance.

Actress Molly Ringwald, who appeared in some of the most famous coming-of-age films such as Pretty in Pink, The Breakfast Club and Sixteen Candles, tweeted her support for the film.

I just saw @eighthgrademov and thought it was the best film about adolescence I’ve seen in a long time. Maybe ever. #eighthgrademovie

The film doesn’t shy away from accurately depicting the reality of eighth graders today. Acne isn’t covered by makeup, many actors spend most of their screen time glued to their phones, and sexual exploration is shown.

Laffly praises the film’s realistic portrayal of the struggles in the eighth grade and stresses the importance of adolescents seeing it.

“Eighth Grade is a deeply empathetic portrayal of an awkward period in a teenager’s life and actively injects optimism to everyone who sees it,” she said via email. “Young ones growing up in the damaging age of social media will leave this film with a more secure sense of identity.”

The initial release of the film grossed $255,000 on its opening weekend, but was screened in only four theatres across America. That translates to a $63,071 per-screen-average, making it the highest average grossing film of 2018.