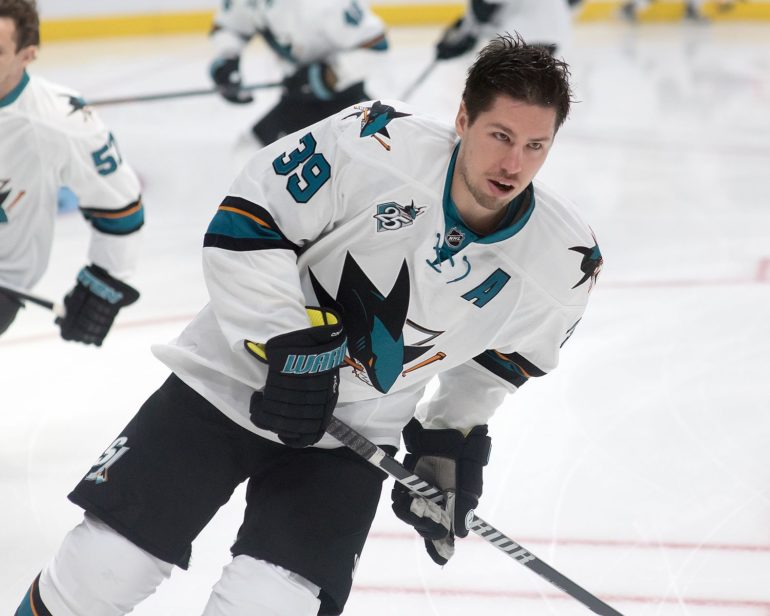 NHL centre Logan Couture is staying with the San Jose Sharks for the foreseeable future after signing an eight-year extension.

The Lucan, Ont., native wasn’t always focused on hockey. His father Chet Couture recalls the lad reached a crossroads when he was 13, where he made a choice between baseball or hockey. His talents in baseball were such that the elder Couture wasn’t always sure his son would play in the NHL.

“He was extremely good, and when I say that, I played senior level of hockey which is a higher level than amateur hockey but certainly not pro. I thought I knew hockey fairly well. He obviously was a very good hockey player but he was an even better baseball player,” Chet said.

“If anything Logan could probably eventually … to go play baseball in the NCAA on a scholarship and I actually thought that. I never thought much about a hockey future in the OHL, let alone the NHL, when he was young, even though he was very good,” he said.

Despite Logan’s baseball skills, his passion lay elsewhere. He chose hockey over baseball at the age of 13.

“He was so good at baseball, he was 13 playing against 17-year-olds and dominating in Ontario baseball,” Chet said. “He was well known to Baseball Canada and won some Blue Jay hit-run-and-throw contests when he was younger.”

The decision had the hallmarks of an epiphany.

“He just decided one day and said, ‘Dad I’m going to quit baseball to concentrate on hockey,'” Chet said. “I said, ‘are you sure you want to do this? Think this through,’ and he said, ‘yep that’s what I want to do.’ He just had more of a love for hockey than baseball.”

After Logan moved to hockey full-time, Chet never appreciated that his son would play in the NHL until that moment in the 2007 entry draft where he was selected ninth overall by the Sharks.

“They traded up to get him,” he said. “They gave up some assets. I think then I realized that they are really going to give him an opportunity.”

It’s a pleasure to play out here in the Bay. Thank you @sanjosesharks for the opportunity to live out my dream……been here for 10 but I feel like a rookie ?

Unlike John Tavares, this year’s marquee free agent who went to his favourite childhood team, the Toronto Maple Leafs, Logan wanted to stay with San Jose after building a love for the team, city and people.

“You know back when he was drafted he always said he would go to whatever team drafts him, he would just be honoured to be drafted,” Chet said. “With San Jose, things have worked out well for him, who knows what would of happened if someone else drafted him, including Buffalo.”

The Sabres were Logan’s favourite childhood team, “but to my knowledge he has never thought about playing anywhere else but San Jose,” he said.

Logan has come a long way since he was four years old, crying on the bench not wanting to play. But even that childhood reluctance Logan demonstrated a great skill set on the ice.

“I didn’t see anyone else his age who could do that,” he said.

“He started to play organized hockey when he was five and every team he played against the goalie would lay down across the goal line, because no kid could lift the puck,” Chet said. “Except Logan would come down and ding it off the crossbar.

“I remember a whole lot of people in those days would say, ‘Your son’s going to be in the NHL and he’s incredible,’” he said.