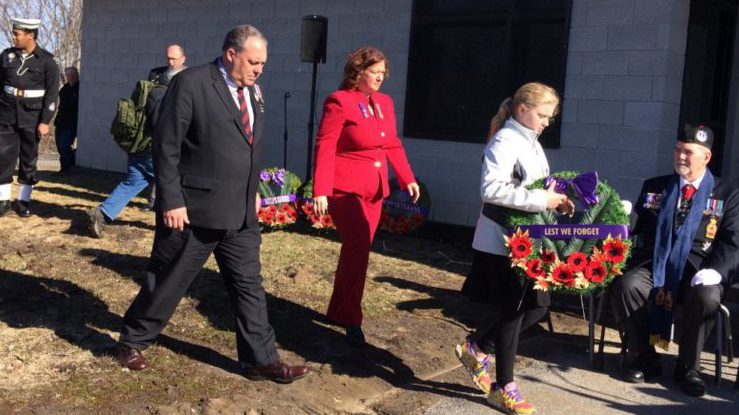 A lot of yelling. Not a lot of answering. Also, a lot of wrong info. Refugee settlement & housing is provincial jurisdiction. Permanent residents are federal jurisdiction. What is the plan for people here now who need safe shelter?https://t.co/4xxpeoK0sy #refugeeswelcome #onpoli

Ontario’s Immigration Minister Lisa MacLeod remains steadfast in asking the federal government to pay $175 million to compensate for the costs incurred by emergency housing needs in the province.

MacLeod has indicated the influx of irregular border crossers coming in from the U.S., who are asking for refugee protection from the Canadian government, have been contributing to growing strains on Ontario cities’ ability to accommodate everyone. The $175 million includes costs for housing and social assistance.

Official stats are out. As we reported, border-crossing asylum seeker numbers are down – at their lowest point since last June, in fact. https://t.co/3JluKZHWRo pic.twitter.com/OCzco0G9aB

It was another heated Question Period at Queen’s Park yesterday and it was only day two of the Ontario Legislature’s rare summer session.

One of the hottest topics among raucous MPPS during Tuesday’s Question Period concerned asylum seekers.

“Yesterday I asked the premier about the refugee crisis and federal funding,” NDP MPP Jennifer French said. “The premier passed me off to the member from Nepean, who did a lot of yelling and posturing about who’s more Canadian and gave me a list of racialized MPPs in the PC caucus.”

She was referring to MacLeod, a veteran MPP who has a habit of yelling directly at opposition members rather than the traditional method of addressing the speaker when answering questions in the legislature.

“But yesterday’s hooting and hollering does nothing to solve this crisis and this government’s lack of clarity is making things worse,” French said. “Because of the lack of clarity, the House of Common’s standing committee on citizenship and immigration had to hold an emergency meeting on Parliament Hill yesterday.

“So I’d like to ask the premier again, why on earth would this government walk away from $11 million dollars to help our cities?” she questioned. “Is it because you haven’t figured out yet how to redirect it into the pockets of your corporate friends?”

The week before Ford’s government was elected into office, the Federal Immigration Minister Ahmed Hussen said Ontario would be receiving $11 million to alleviate some of the pressure caused by the influx of asylum seekers.

MacLeod responded to French by saying that math was “clearly” not a “strong suit” of the official opposition.

“The price tag is $175 million and growing and I’m going to tell you one thing, my ministry is quite large,” she countered.

MacLeod pointed out her ministry is in charge of files pertaining to child care, people with autism, developmental disabilities, along with those in the welfare system, and the Ontario Disability Support Program (ODSP). She reminded the opposition that women escaping domestic violence and being trafficked fall under the scope of her ministry as well.

“So I ask you this, and I hope you have a response for me, where do you want to take the money from, those vulnerable people or the federal government, who created a mess at the border and who owes this province $175 million?” MacLeod asked.

She said a PC statement issued during the election read, “while funding for refugees is primary a federal issue, Doug Ford will sit down with [Toronto] Mayor [John] Tory to ensure the city has the funding it needs.”

“I’ll explain to the team [PCs], it is also a provincial responsibility, both morally and legally,” she stated.

“The people of Ontario and our municipalities are looking to the provincial government to do the right thing and help people who are seeking refuge,” she said. “While you waste precious time going back and forth about which level of government should shoulder the expense refugee sad asylum seekers are suffering.”

French said she hopes the premier will do the right thing by providing much needed housing to families currently living on college residences before they are evicted on Aug. 9.

The city of Toronto is currently using Humber and Centennial College residences as temporary accommodation for refugees due to the housing crisis in the city. In late May, four hundred beds at each college residence were made available.

“Immigration and refugee policy are under the preview of the federal government, no one disputes that,” MacLeod responded.

$90 Million on social assistance costs. $74 Million on Toronto costs. $11 Million on Ottawa (City) shelter costs. It’s not too late, Minister, to make Ontario whole and to apologize for your attacks against me. https://t.co/ZBp2ORATPP

Saskatchewan joins Ontario in demanding the federal government pay its bills. Thank you @JHarrisonMLA The Ontario, Toronto and Ottawa bill is $175m and counting. The feds are offering 6 cents on the dollar. @MacLeodLisa is asking the feds to pay the bills for decisions they make

She said the province faces $75 million in housing costs in Toronto, along with $11 million in Ottawa and $90 million for social assistance.

MacLeod told the opposition she will not accept “six cents on the dollar.”