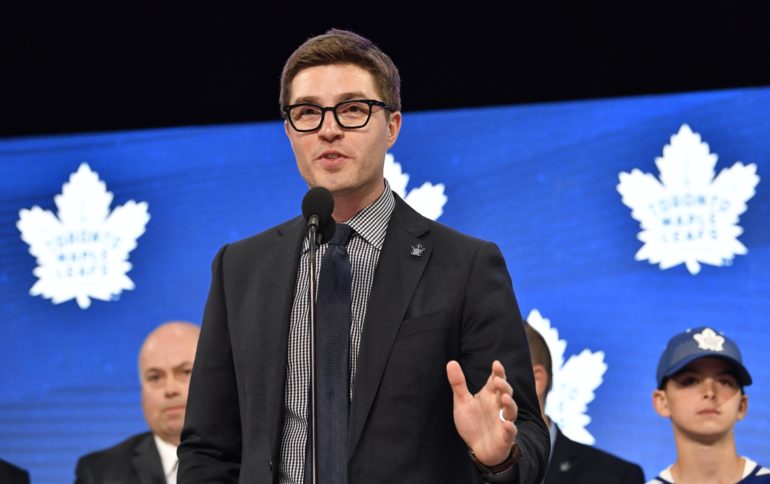 Vegas Golden Knights left wing James Neal (18) celebrates with teammates after scoring a goal against the Washington Capitals in the third period in game four of the 2018 Stanley Cup Final. He signed a five-year deal with Calgary Flames. (Amber Searls-USA TODAY Sports/Reuters)

The NHL free agency period has seen big names moving to new teams this offseason, from John Tavares returning home to Toronto and James Neal taking his talents to the Calgary Flames.

With plenty of names still looking to find homes, these are so far the top five free agents who have landed in new cities.

Johnson is a former third overall pick for the Carolina Hurricanes and has had a career of ups and downs. Some of his downs could be attributed to off-ice distractions after he filed for bankruptcy in 2014 while playing for Columbus Blue Jackets.

He is still a valuable defensemen with an offensive upside, surpassing 40 points twice in his career. Last season, however, he only managed to reach 11 points, tied for his lowest during his time in the NHL.

Johnson is likely to end up on the same line as Penguins’ elite defensemen Kris Letang, which should get him plenty of opportunities to set up his teammate.

Bozak is a consistent 40-plus point forward, reaching the mark in five different seasons. His highest was 55 points in the 2016-2017 campaign with the Maple Leafs.

The centreman not only proven his consistency throughout his career in point totals, but in the shootout as well. Last year, Bozak was 83.3 per cent in the shootout, scoring on five of his six attempts. That shootout record gives major credit to Bozak for helping the Leafs earn wins in extra time.

The Blues added Bozak to help fill up the centre position, gaining a shootout specialist and could help bring home the extra point in neck-and-neck games.

Number Three: James van Riemsdyk back to the Flyers

Van Riemsdyk, who has only played for two teams in his NHL career, is leaving Toronto to going back to the team who drafted him in 2007. While playing for the Philadelphia Flyers, he reached the Stanley Cup final in his first season.

He has reached the 50-plus point mark in his past five years, minus the lockout year where he got 29 points in 40 games.

Over the next five years he will be looking to replicate a Stanley Cup final finish with the Flyers and will play on either of the top two lines. Claude Giroux and company will be happy to have him back in the orange and black.

Thank you Toronto for the memories ??? pic.twitter.com/BJTfxYrGga

Neal made it to the Stanley Cup finals twice in as many years. The 30-year-old left wing will most likely play with Sean Monahan and Johnny Gaudreau, which should keep other teams playing very defensively with them being a major scoring threat.

Neal has scored 21 or more goals a season throughout his career, and reached 81 points in 80 games with the Penguins in the 2011-2012 season.

He has a strong nose for the net and loves to shoot pucks from anywhere to keep opposing goalies on their toes. Neal playing on the Flames’ top line smells of pucks hitting the twine.

Number One: John Tavares to the Maple Leafs

John Tavares was the first player to ever receive exceptional player status in the Canadian Hockey League (CHL), meaning he was able to play in juniors at the age of 15. Ever since then, Tavares has been in the spotlight.

The elite centreman left his long time home on Long Island with the New York Islanders to play out his childhood dream in playing for the Maple Leafs.

Tavares is skilled in almost every category, playing with a well rounded style. He has surpassed 80 points in a season three times in his career. In signing Tavares, the Leafs picked up the best player available in this year’s free agency.

Not everyday you can live a childhood dream pic.twitter.com/YUTKdfMALl

Although Tavares has only played 24 NHL playoff games, he has 22 points, including the game-winning goal in double overtime to advance the Islanders to the second round for the first time in 23 years in the 2015-16 season.

Tavares is rumoured to be placed on a line with Patrick Marleau and Mitch Marner, which could spell trouble for opposing teams with a fast-paced skilled line coming at them.